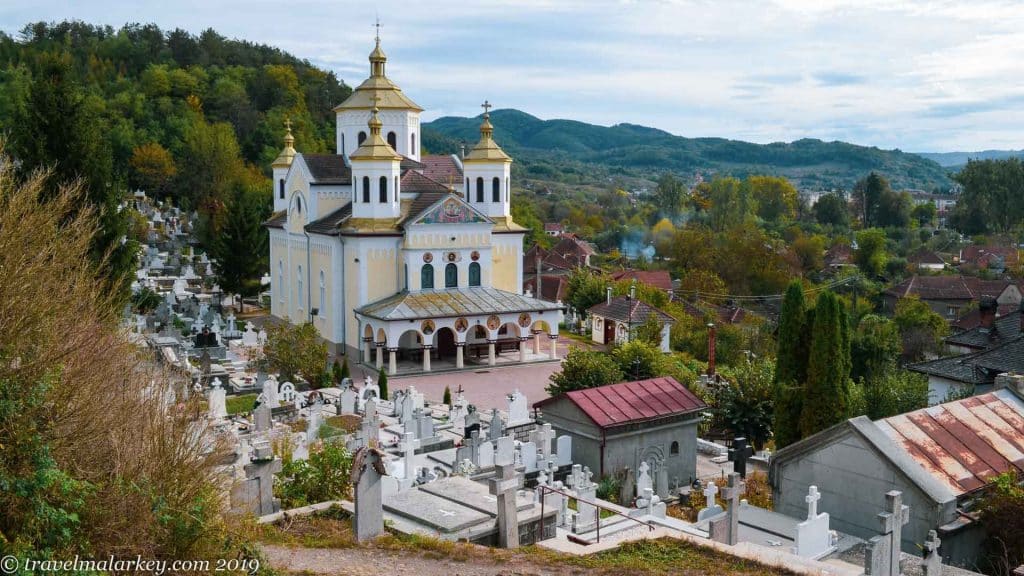 Our day in Sibiu had been our fourth in Romania, and it was time to think about making our way onwards to Hungary. I had checked the map for a route through to Poland and Auschwitz. There were many ways to go, but our time was limited, and I was keeping roughly to the shortest, straightest, routes I could. Which would see us cross into Hungary at the border point near the Romanian city of Oradea.

A quick google and it looked like Oradea would make a good stopover. But it was too far to be any fun driving to in one day. Besides I had far too much work to catch up on. Really I could do with parking up somewhere in the back of beyond for a fortnight. But there was no time for that. So one night in the back of beyond would have to do. One night in a “nowhere town”, halfway to Oradea. And so it was that a bit of time pouring over the maps later I turned up the little town of Brad.

It was roughly at the right point on the map for a halfway point. Google had nothing to say about it other than there used to be a gold mine there, and their were no pretty pictures to speak of. And lastly there was a decent sounding parking spot on park4night. Perfect. Brad the Transylvanian “nowhere town” here we come. 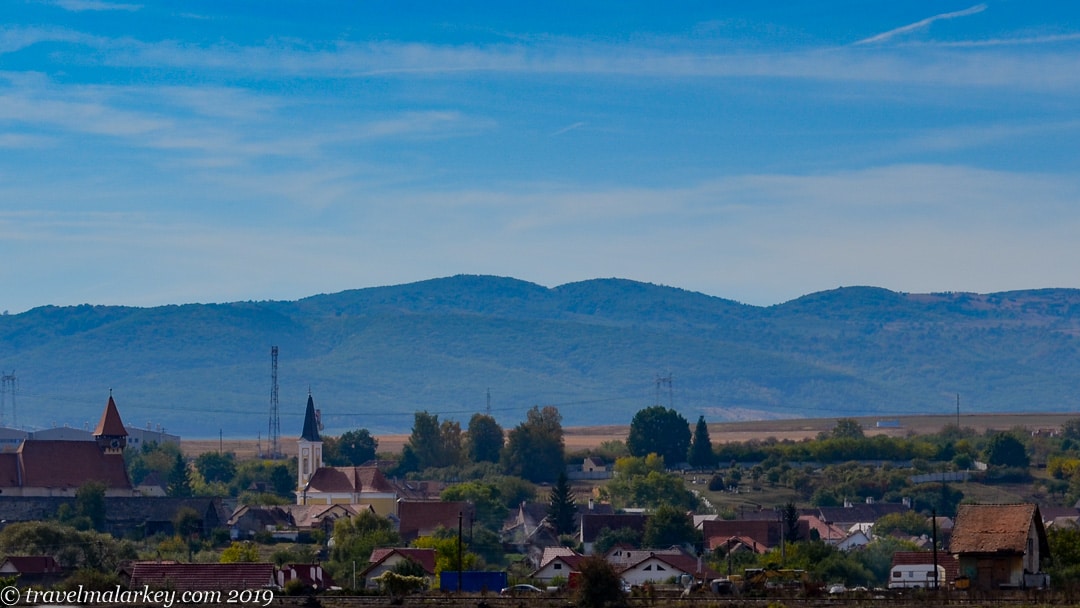 Transylvania is a beautiful part of the world to drive through

Although we were happily expecting nothing of interest from the town it was still a beautiful drive there from Sibiu. Not quite as stunning as the previous day, but interesting and pretty nevertheless. Golden plains made way to rolling, wooded hills. Church spired Transylvanian villages popped up here and there along the way. Pretty little old fashioned farmsteads with the traditional haystacks dotted the countryside. 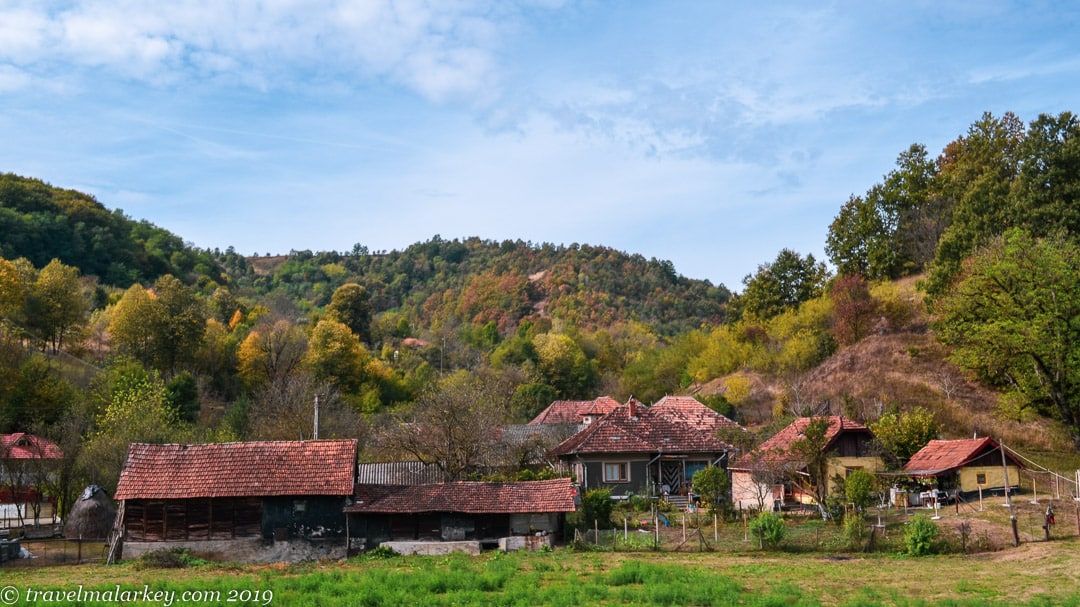 As we drew closer to Brad we passed a cart drawn by two cattle. A little further and two gypsy boys laughed and waved from a cart with (probably) their father. The church spires began to be increasingly covered in shiny gold, silver and bronze tiles. And then we passed the sign for Brad, drove up some rattly back roads, and pulled into the perfect quiet of our spot behind the stadium. 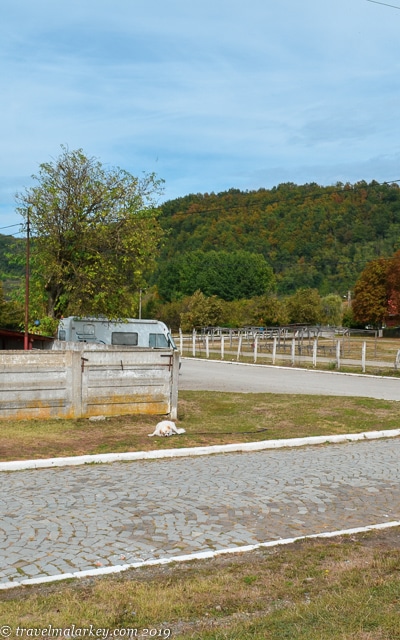 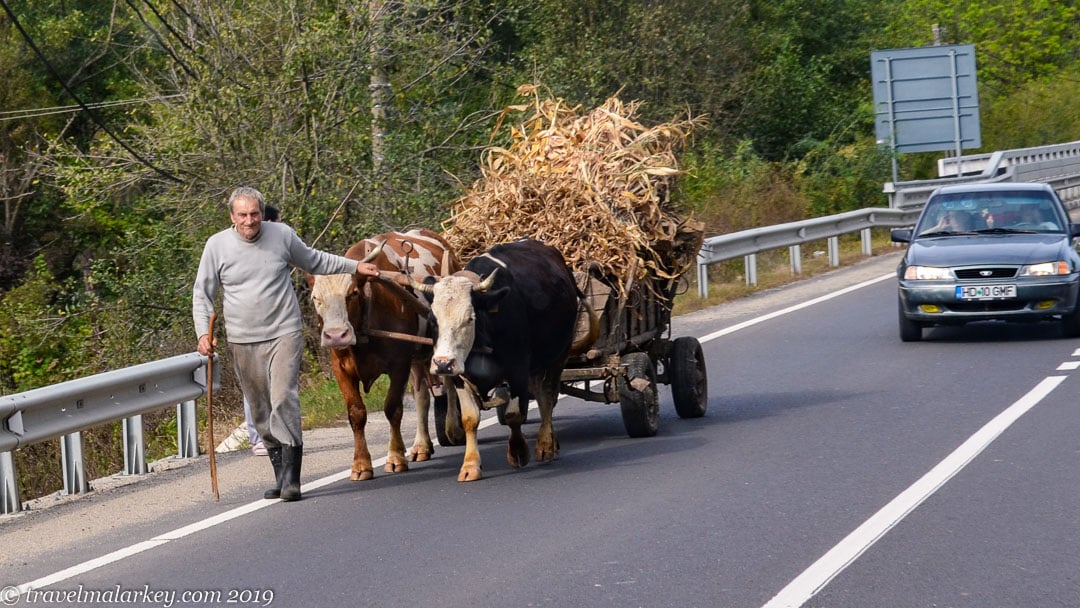 Hard working Romanian farmers and their even harder working cattle

We were looking for a quiet, uneventful day, but still…the dog needed to be walked, and Brad still needed to be explored. Small and uneventful as it would hopefully prove to be. The places where people live their ordinary lives are as much – if not more – the story of our species, as fancy palaces, castles and cannonballs.

And when a tour is finished these “nowhere towns” are in many ways the main meat that flavour our view of a country. The cathedrals, the statues of men with weapons, are often it seems the pen and ink with which the state of these towns are written. And the art, the music, the food and the dancing are the soul. The place where we all come together. Where differences are both most pronounced, and at the same time where they dissolve completely. Banished with a smile and a schnapps. 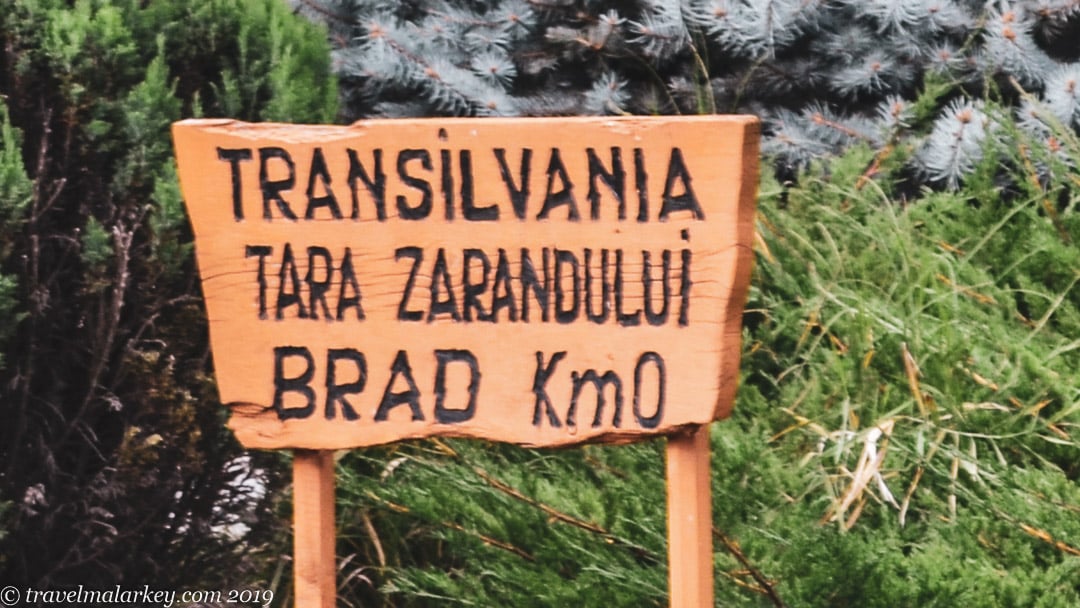 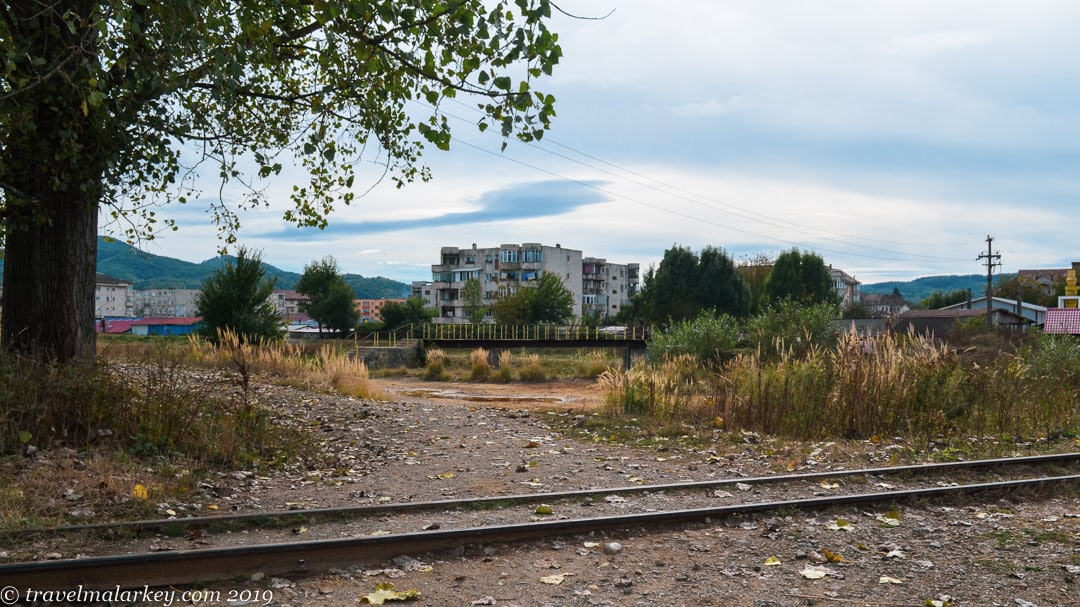 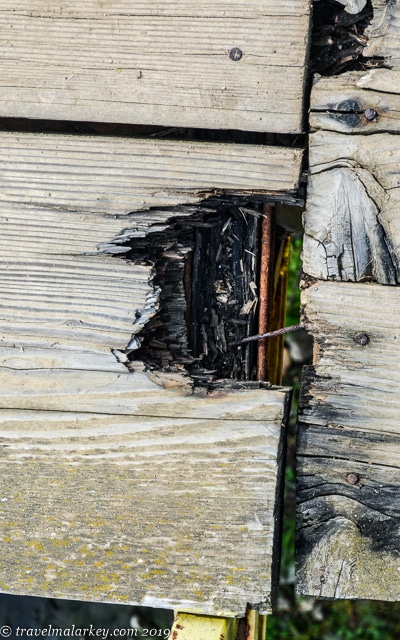 Quiet, uninteresting little Brad was a good place to visit to see this side of the country. The five minute walk to the centre was an adventure trip across creaking, hole filled footbridges that threatened to crumble beneath us at every step. The old goldmine railtracks, and crumbling socialist era flats, perfectly delivered that lost and lonely, abandoned town feel we all know so well from American movies.

The town had nothing of normal tourist interest to speak of. There is a Gold museum telling the history of the mine – which dates back to the Roman days, and was the reason for the founding of the town. Perhaps if we didn’t have Marley we would have looked inside, but instead we paid our dues to the town with beer and cake at one of the cafes. 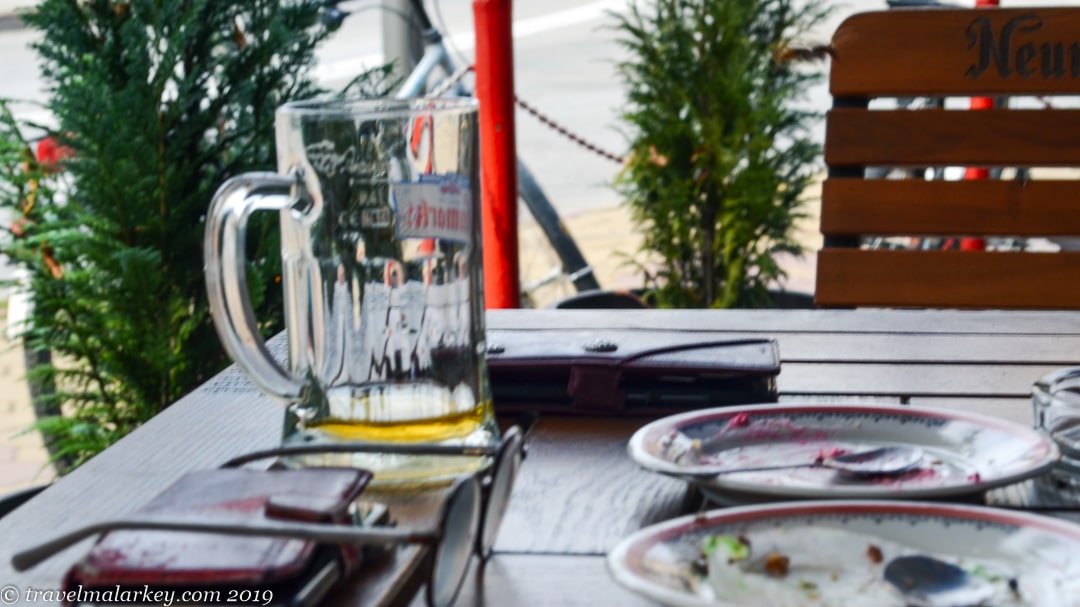 Jay found a stunning, iridescent, flower chafer beetle kicking on it’s back in the middle of a dusty road. Saved from both traffic and Marley’s snuffling nose we deposited it in some bushes and carried on back across the tracks towards the beautiful spires of the church and monastery. 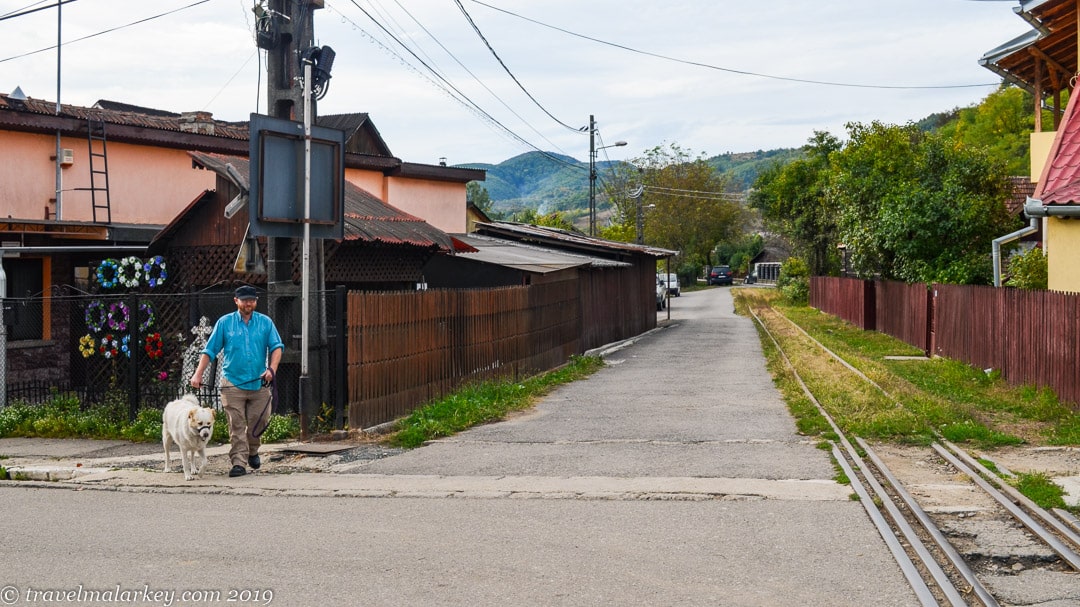 As we drew closer the sound of chanting/singing drifted to our ears down the almost empty roadways. We didn’t know what it was exactly. Prayers at the monastery. A ceremony of some sort. Perhaps a wedding as people were going to and fro into the church with what looked like jugs of wine? 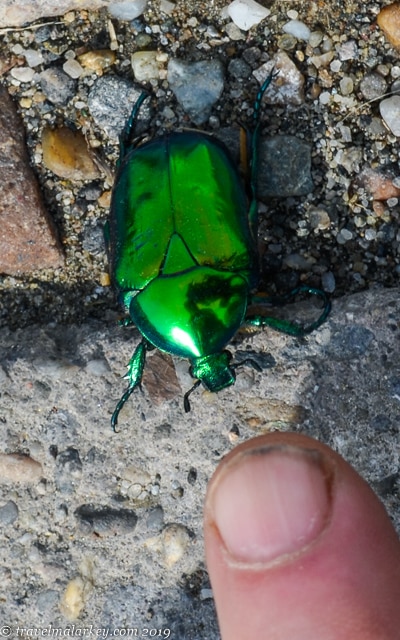 Travel Malarkey comes across a stunning church in the Transylvania town of Brad, with the most beautiful sound of chanting drifting across the hillsides.

We didn’t know. But it carried on for ages as we walked around the outside of the buildings and on up to the graveyard beyond. Beautiful chants reminding us of the Moroccan call to prayer rang out, clear as a bell, across the beautiful Romanian hillsides. Wrapping us in a dream as we watched the graveyard workers load old branches and debris onto waiting horse drawn carts. Snapped a photo of a huge, yellow spider sitting dead centre of her web among the tombstones. 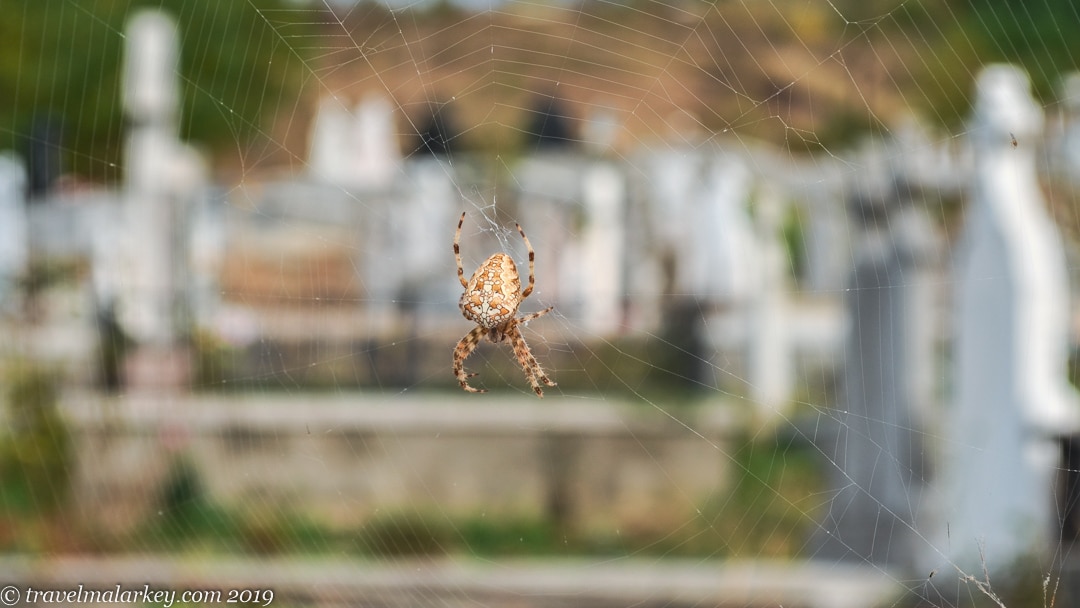 What a gift of a “Transylvania” picture. Massive spider in graveyard

“There’s always something interesting isn’t there?” I said to Jay.

And we laughed as we made our way back towards Iggy. Trying another footbridge across the small river this time. Only to find it was the worst of all, and only survivable by walking right at the edges of the softly crumbling wood. 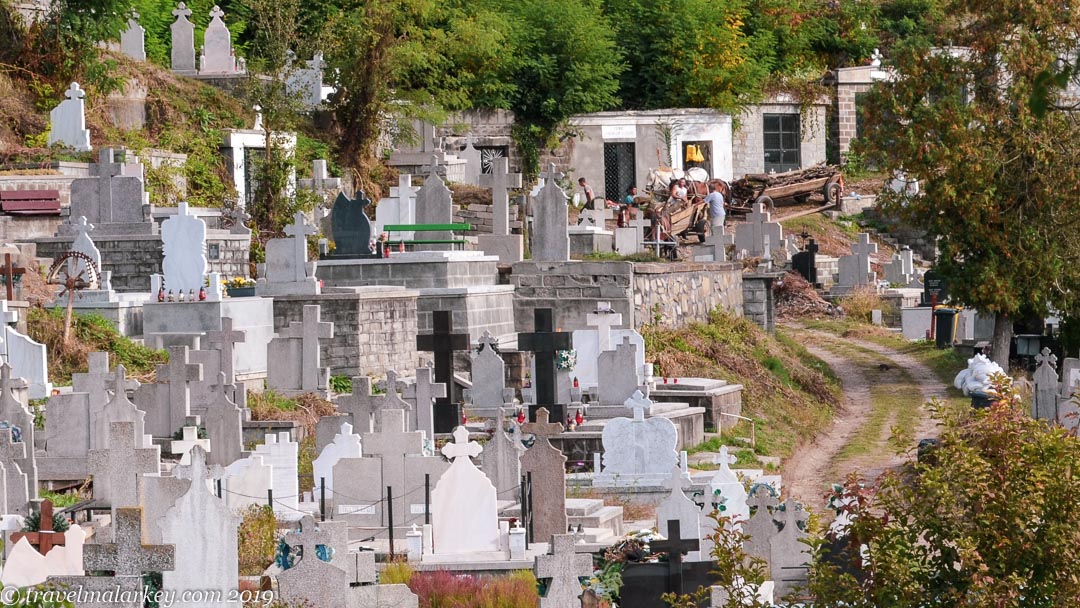 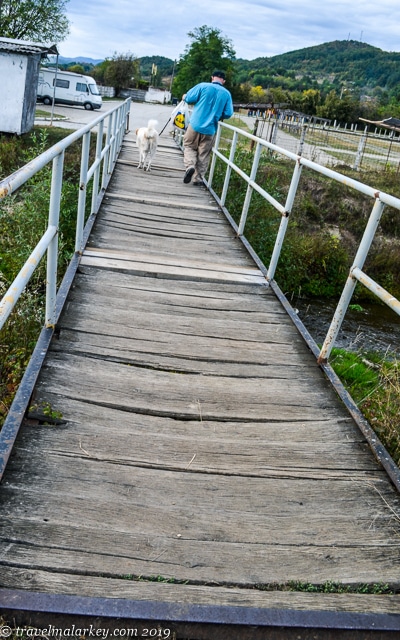 Then we made dinner, watched Carnival Row on Netflix, stuffed the gaps in the flyscreen with tissue to keep out the clouds of mosquitoes. The local teens came out for a party. Loud music and screaming girls that lasted for an hour then went elsewhere. Perhaps home, curfew reached for the evening.

The silence returned and we drained the last drops from our glasses and turned in for the night. The sound of breathing from Jay and Marley slowed, softened and all that remained was the sweet, rythmic, churp, churp, churp of the crickets… 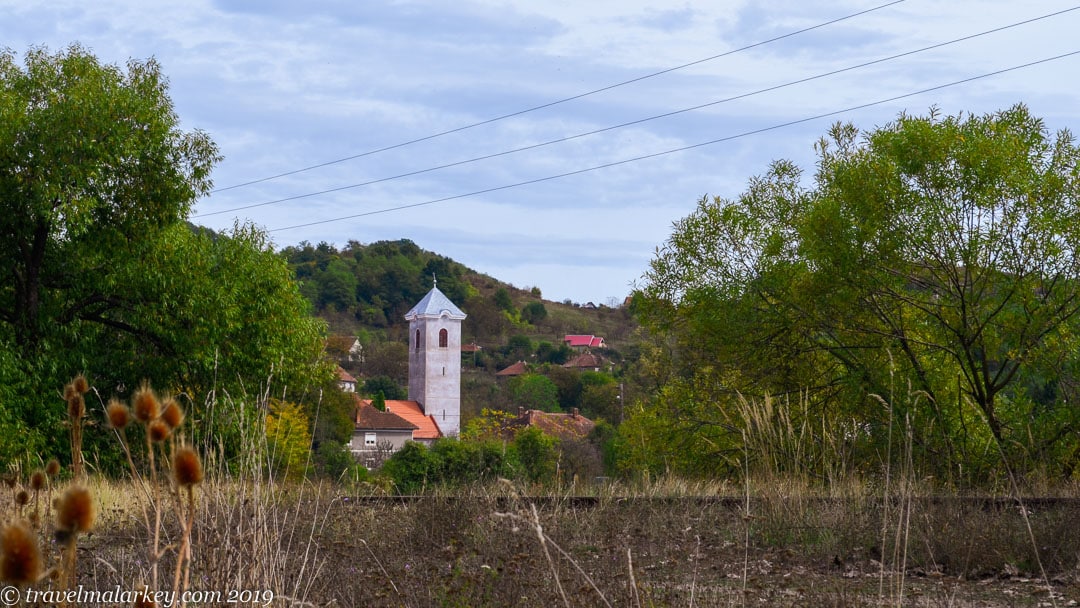