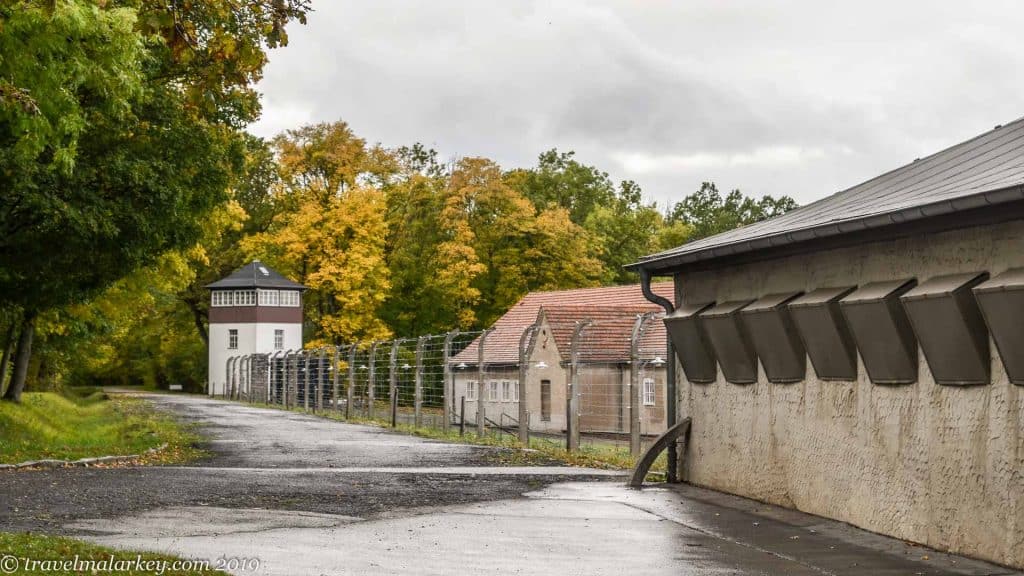 The first thing that struck me about Buchenwald was the sheer ordinariness of it. No medieval castle dungeons here. Dripping dank water, atmospherically, down ancient stone walls. Just some squat, grey, featurless walls, a long wire fence, and a big open space dotted with the foundation bases of old buildings that were no longer there.

Nondescript was the word that came first to my mind. Not a word I would have thought to associate with an infamous Nazi concentration camp. I tried to conjure in my mind the fifty-six thousand men, women and children who were murdered – by one means or another – within this seemingly simple and innocuous compound. Wondered if the stark, business like, ordinariness of the surroundings had been apparent to them too? To all the three hundred and seven thousand, and eight hundred souls, who were brought to this shameful, nightmare of a place?

Or did the curved, barbed, electrocuted wires of the fence seem a little less industrial – a little more threatening – when they were lined, every 100 metres, by armed watchtowers? With more Nazi soldiers pacing continously around the base of the fence? Surrounding it completely, two deep, whenever a group of inmates was being taken in or out of the compound. On their way to gruelling, forced labour perhaps. Maybe in the neighbouring towns, or being transported to other labour camps further away. And for some to the death transports, bound for that other, distant hell, that was Auschwitz.

Did it still look so nondescript with the long lines of bunkers in the middle of the field? With thousands of emaciated, half starved men standing in squared off groups across the muster square?

Did it still feel innocuous with the smoke from the crematorium building tainting the air?

The horror of Buchenwald today is a slow burn kind of a thing. It doesn’t reach up and grab you by the throat as soon as you arrive on this peaceful hillside in Germany. Most people will be familiar with what happened in these camps. Like me they will walk through these gates knowing that the Nazis murdered somewhere in the region of seventeen million people. Six million of them were Jews. The other eleven million were any other people that didn’t fit the Nazi idea of fit and proper people.

All a person had to do to be forced at gunpoint through the gates of Buchenwald was to disagree with the state. Or to have spent time in other countries. To be Black. To be one of the innocents with Downs Syndrome or any other learning disability. To be Gay, to be Roma, Sinti, Polish, Soviet, Jew…the list was long.

I carried the knowledge of this with me as I walked through the gate, under the sign that declares “Jedem Das Seine” – “Everyone gets what he deserves”. But I wondered what knowledge the innocents brought here by the Nazis carried in with them? Did they know? Had they heard rumours? Seen others murdered? Were they hopeless? Defiant? Resigned? Determined? Terrified? Angry? Heartbroken? Confused?

The information recommends two and a half hours to visit the inmates camp at Buchenwald, and that is about how long we took for our visit. But if we hadn’t had Marley waiting for us in the van I think it would have taken us more like three and a half to four hours to walk around the compound. Every step is a step through invisible, long spent, blood. And these steps, for me, had to be taken slowly. Calling the captive and the slain to mind with every footfall and every pause. Trying to imagine them in my head.

It is hard to imagine horror in a green field, surrounded by the beautiful colours of autumn woods. But the plaques telling what buildings stood where helped make it real. Here stood the “bunkers”. There was the infirmary corner. Where some were helped, and more were murdered for being sick.

These foundations held the building where inmates were subjected to lethal typhoid experiments. This one was where female prisoners were brought and forced into sexual slavery. Sold numerous times every day as “special rewards” for male prisoners who pleased their captors.

The brothel and the”Small Camp “quarrantine” area where the childrens’ hut was housed were two of the three worst things in the camp.

Buchenwald, as I have said, was a slow burn of a horror experience. For such a place to ever have existed is beyond all sanity. To be incarcerated there a horror beyond the worst imaginings of our minds. To be daily, repeatedly, raped by your fellow victims is unendurable. And to bring children here? What can the human mind do when faced with seeing children as young as two years old incarcerated to die in such a place as Buchenwald?

We had walked clockwise around the compound and all that was left now was the old Depot building that housed the museum displays and, finally, the Crematorium.

It was in the Depot that we realised we needed much more time. There are not a huge number of displays, and they are not difficult to understand. Everything is written clearly in both German and English and they start at the beginning of Buchenwald – before the war had even begun – and tell, very simply, the story of this place, the nearby town, the guards, the inmates, the liberation of the camp and the aftermath.

The courage of the inmates who fought back in any tiny way they could against the people and the regime who did this to them. Who stole cameras, built radios, protected other inmates, sabotaged armaments.

The courage, the defiance, the anger, the bemusement in the eyes of the men in the slideshow of photos. Pictures taken of the prisoners as they were registered on their arrival at Buchenwald. Before they were shorn, disinfected, deprived of their clothes, their belongings and thrown whatever pieces of rough spun, blue striped, prisoner clothing was to hand. Coloured triangles assigned depending on their classification. Brown for Roma, red for political prisoners, the infamous two yellow triangles, worn Star of David style, for the Jews.

My mind does not know what to do with these different images. The cruelty and horror on the one hand. The bravery, the insistence of hope and stuggle against impossible odds on the other. How do we even begin to think of these things? To comprehend them in a way that is real? Real and not just a way of pushing them to one side? Making ourselves feel more comfortable?

And then there was nothing left but the crematorium.

In the first area people were measured, weighed, and shot. Bodies heaped in large wheeled carts and pushed outside.

In another area there was a line of ovens in the center of a room. Trolley like contraptions pushed the bodies of the murdered prisoners into the flames.

Below it all was a cellar. With a chute that could just as easily have been used for rolling beer barrells down. Or rubbish. But the prisoners’ bodies were the refuse that were tipped down this chute. Then dragged to a lift which raised them up to the incinerator room above.

All around the tops of the high cellar walls large metal hooks were built into the walls. A sign told us over a thousand people were hung on these hooks to choke to death.

Outside a large photograph showed the courtyard full of bodies. The information plaque told us this was how the US army liberators found it when they arrived on April 11th 1944.

And then we were done, and we were out. We were walking out the gates that fifty-six thousand men, women and children before us walked in and never got to walk out again. And we didn’t really talk about it. And we maybe never really will.

I can’t say what I want you, you the person reading this, to get from these words. But whatever it is, please don’t let it be hate. Don’t let it be a feeling of difference, or a feeling of being “better than”. Please don’t use it to build walls in your heart or your mind. Because those are the very things that lead to the building of places like Buchenwald. And without those things it would never have been built.

There are many things I do not know. But that one thing, that, I know to be truth.