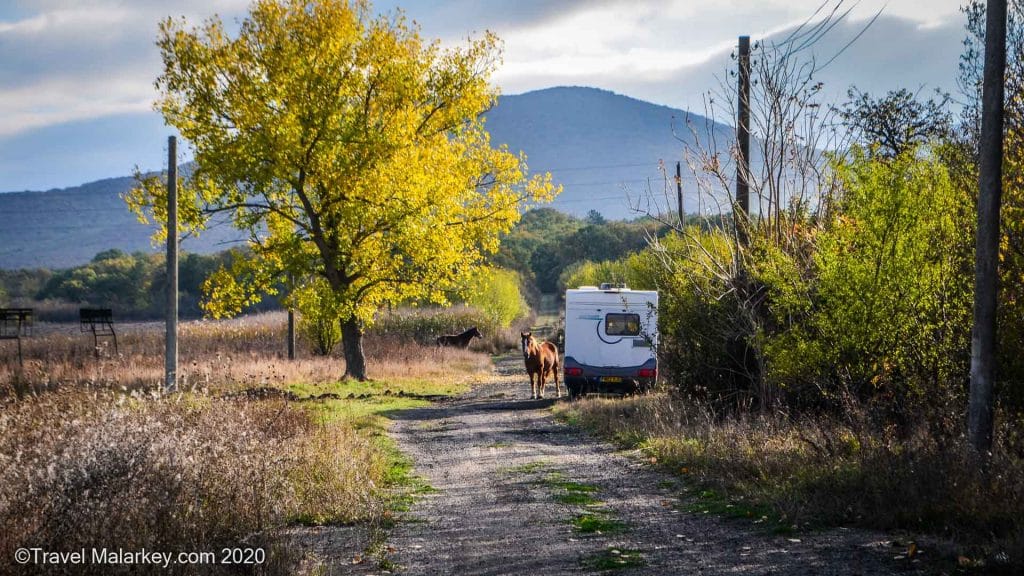 Life, as the saying goes, is an awfully big adventure. A deep, swirling pool of unknown, unseen new moments. Waiting… just round that next bend in the river.

Yes. That bend! That one right there. The one beside that old Hymer motorhome. Parked in a quiet spot on the banks of the river Struma in Blagoevgrad, Bulgaria. Where Jay and Marley walk along the dusty track past the little farm shacks. And Fi sits inside in the warm. Nursing a sore face from her migraine, and clack, clack, clacking at her laptop keys. While the shepherd slowly passes by in a chiming song of sheep bells. 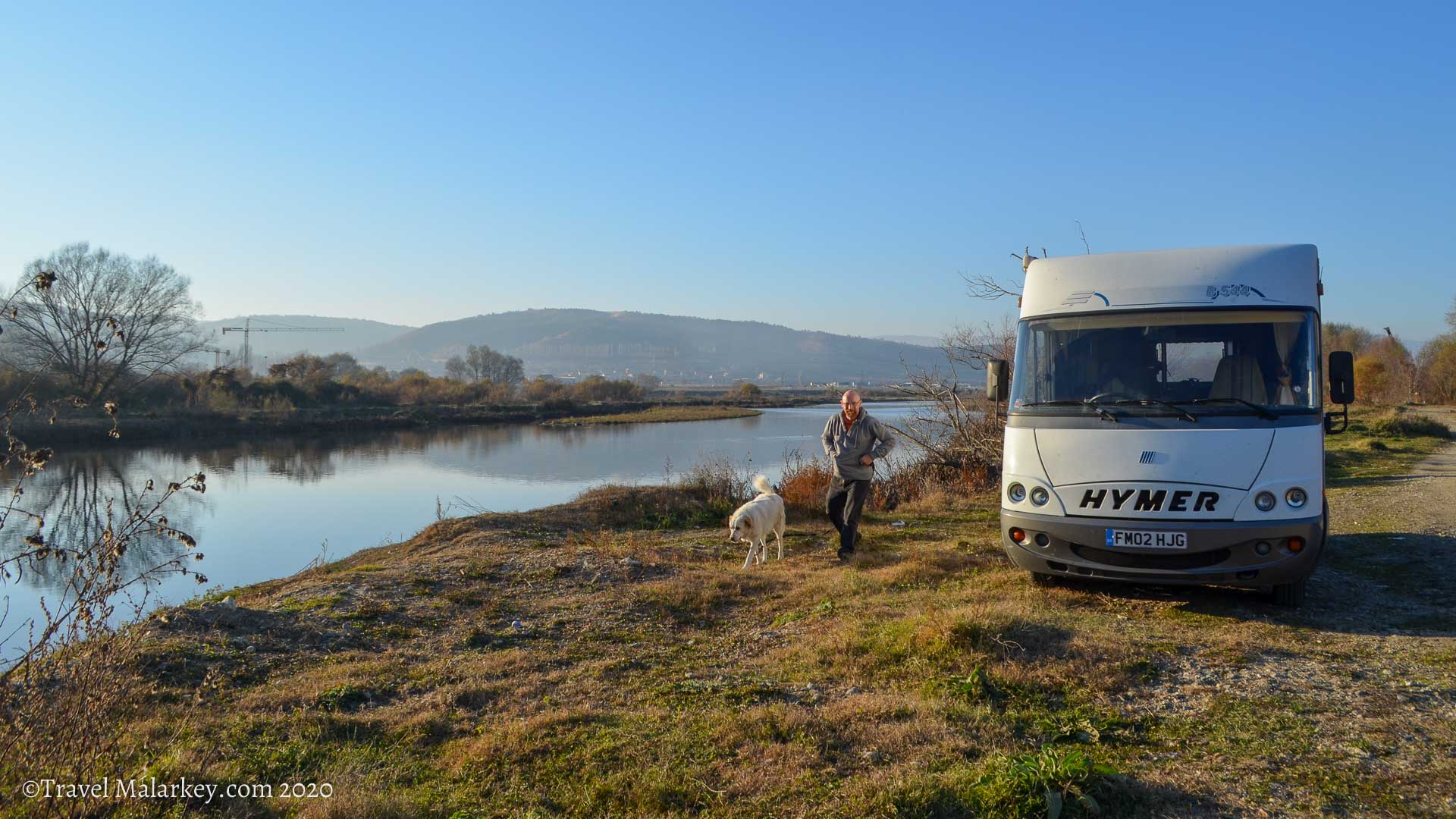 Setting up for the night by the river Struma

It’s an old song, this song of the flocks. Sung for thousands of years across the lands that our ancestors wandered. As we came this way – all of us “Caucasians” – wending our way out from Asia. All across the great plains and mountain passes of Europe we came, and as we passed we stopped. A tribe here. A tribe there. We Celts bade ”fare ye well” to our Slavic cousins and kept on to the West. Following the sun till the ocean stopped us.

And those long distant cousins made their new homes here, by the waters of the Black Sea. On the cusp of a man made line that was yet to be drawn. Between Europe and Asia. East and West. Here they remained with one foot in each world as cultures and civilizations rose and fell around them. Half familiar to our modern Western minds. And half not. Half exotic tastes and sounds and smells. From books, films, dreams of a long forgotten ancestral home in the East.

Ah what an adventure it is to be here now. Sitting by this riverbank on a late November day. Listening to those bells and glancing at the newly acquired boxes at my feet. Boxes marked “Gasoline Chainsaw”, and “Gasoline Generator”. Boxes that whisper to me of a new bend in the river of our lives.

And when they’ve finished whispering they yell out loud…

“What have you gone and done this time?” and “Do you even know how to use us?”

The answer to the second question is an almighty, resounding, “No!”

The answer to the first question is “Terry.” and to expand on that a bit “Terry’s Place.” 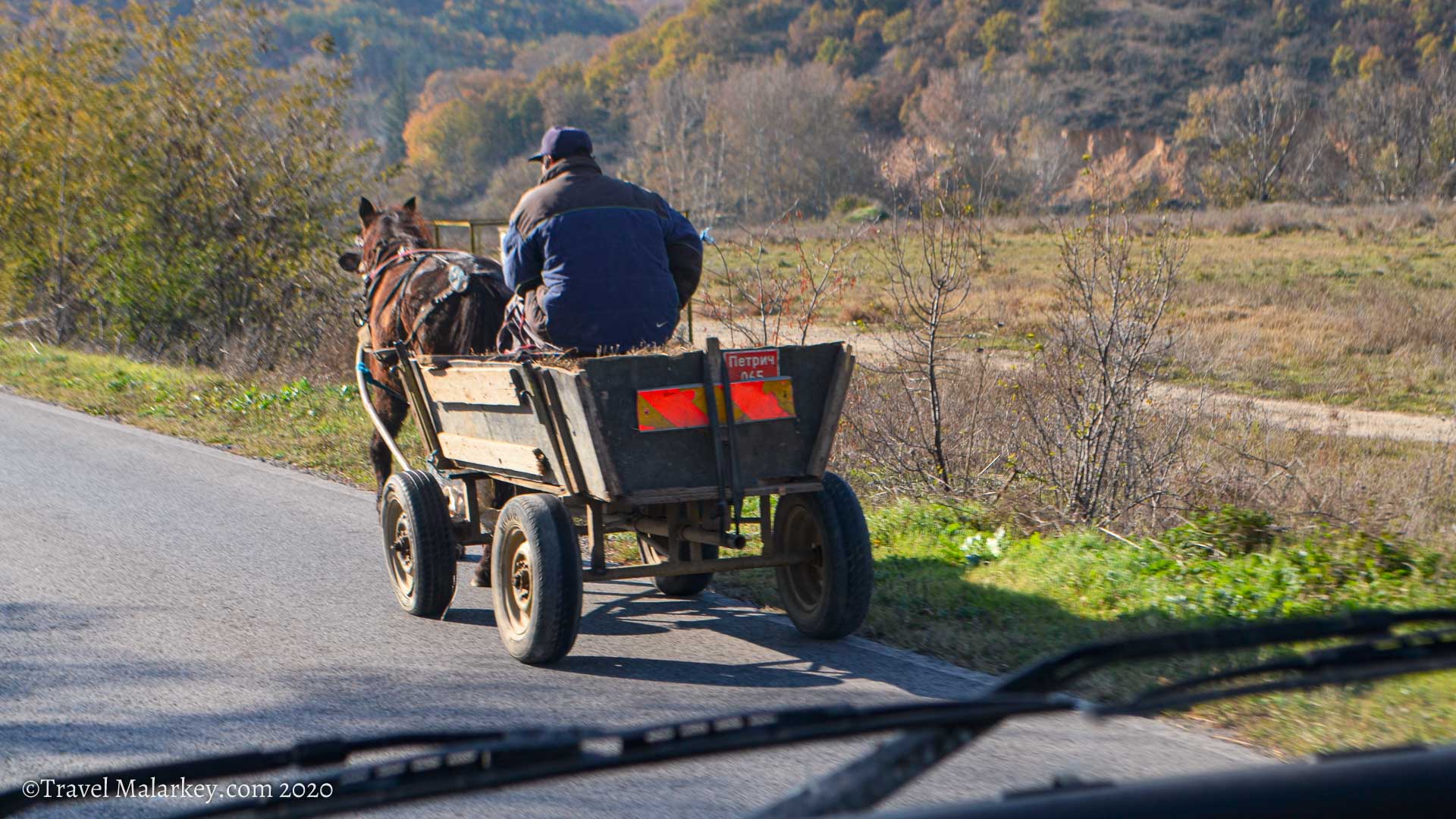 Old traditions are still everyday life for some in Bulgaria

What? You haven’t got a clue what I’m whittering on about? Who’s Terry? Why do we need a chainsaw for him? Has Jay’s nice Heisenberg beard made him a little crazy?

Is “Terry”, perchance, a member of the Russian mafia? Jay’s been making crack cocaine in the Hymer. A deal with “Terry” has gone bad. Jay accidentally shot him in self defence!! And now he needs the chainsaw to chop up the body and dispose of the pieces in the swirling, languid winter waters of the Struma!

Ermm… Nope. Much as that would definitely be a huge adventure that is not – thankfully – the story at all. 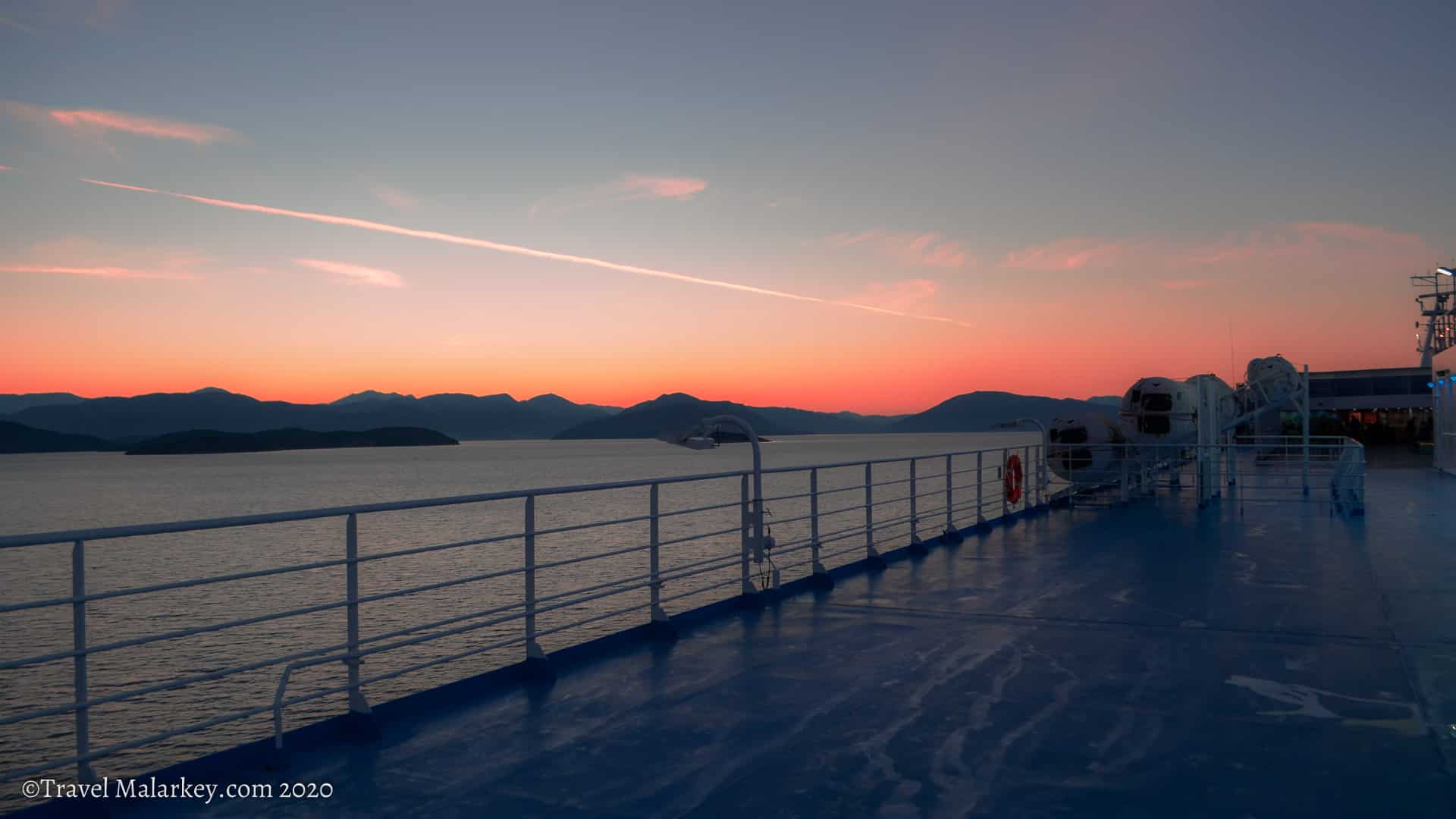 Sunrise over Greece as we arrive on the ferry from Italy

As you will already know if you’ve been following our travels on Facebook, Jay and Marley and I set off from Scotland in July to find a new base in Portugal. But once we’d got our residency papers there, and were looking for a property we realised we really wanted to make our base in Bulgaria.

Portugal was lovely. But we wanted a bigger adventure. To go somewhere that was stranger to us. That would push us a bit harder. Give us an even greater challenge. And we wanted to be based in the East. To take our travels into Turkey and beyond. See the world through different eyes than Western eyes.

And so we shot across the continent to try and get residency in Bulgaria before the Brexit clock stopped ticking at the end of the year. Our plan still being, to find a piece of land big enough for fruit trees and vegetables. To create a beautiful, organic, art garden. With chickens clucking under the trees. And make space for half a dozen campervans to stop over as they travelled.

In our dream there is an old house to renovate. Slowly, over the years. An outside kitchen, with homemade benches, and maybe a pool. Where we would while away evenings with guests. And ice cold beers, and songs sung, as I passed around my old guitar.

It was a beautiful dream. But, we hoped, one that maybe we could make come true. With just a little bit of luck, all of our meagre supply of money, and a whole heap of hard work.

And so, in between sorting out our Bulgarian residency applications, we started travelling around the country looking for “our land”. And that, my dear readers, is where Terry comes in. 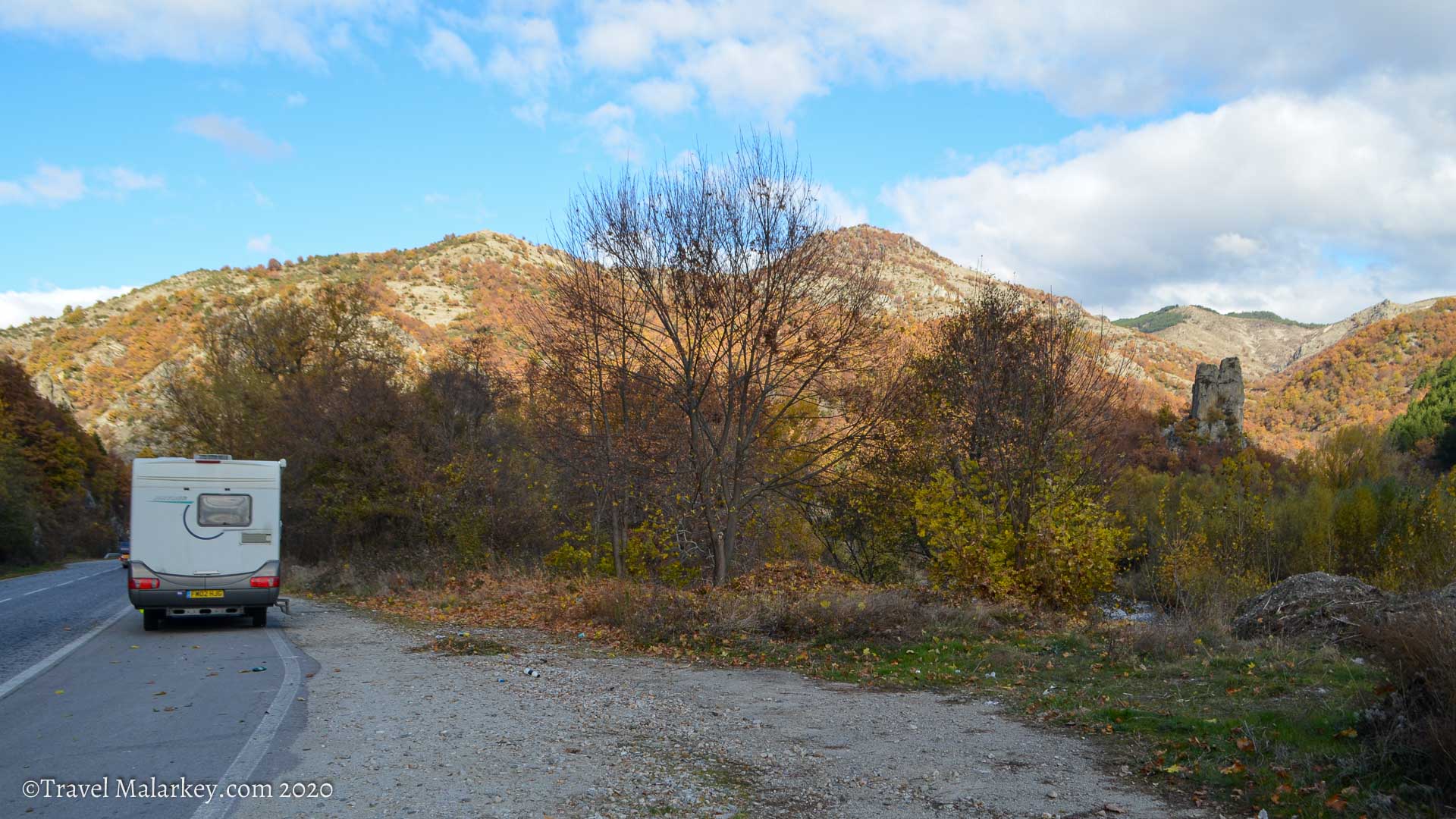 Motorhome Travel is a great way to house hunt.

Terry is a fellow Hymer owner. And not ( as far as I’m aware ) a member of the Russian mafia. Not even a little bit. Although, in fairness, I’ve never met our Terry, so it’s always possible that I could be wrong.

But, although I’ve not met him in the flesh, I’ve been talking to Terry on “Ye Olde Facebooke” for quite a few years now And he’s always struck me as a “thoroughly good egg”. As our cousins the English always say in books and movies, but never in real life. Or if they do, only if they went to school at Eton. And even then probably only as a joke.

Nevertheless Terry was, most definitely, a good egg. And also, unbeknownst to me, not just a fellow Hymer owner. Terry also just happened to be the owner of an old house with 3,000 square metres of land, in south eastern Bulgaria. And, he wasn’t using it anymore.

And when Terry, being a thoroughly good egg, saw that we were looking for something pretty much identical to what he himself had… Well he sent me a message. With some photos. And some map coordinates. And said something like;

“Go have a look if you like. I’m not going to use it. So if you’re interested you can have it. It won’t cost much.”

And so, a couple of weeks ago, we went and had a look. As Terry had said the house had not been used for many, many years and looked to be probably beyond repair. And the garden had grown into a jungle that was not, uh uh, no way, giving up it’s secrets to anyone not wielding a machete.

The house was a bigger project than we had wanted to take on. So we took some photos for Terry to see, and carried on our way. Being “sensible” and holding to the idea of what we had in our heads. While all the time “Terry’s Place” niggled away in the back of my mind.

Maybe we could do something with the old house? Salvage the materials and build something else in its place? Maybe the foundations would still be okay? Or maybe..? Maybe we could just use it for a base?

A starting point. A learning curve. Start hacking our way through that jungle. Carve out a garden. See if any of the old grapevines remained. Ask the mayor for permission to build a little place where campers could stay. To while away a hot summer’s evening by the plunge pool. A cool beer in hand. Playing tunes on my old, Scottish, guitar… 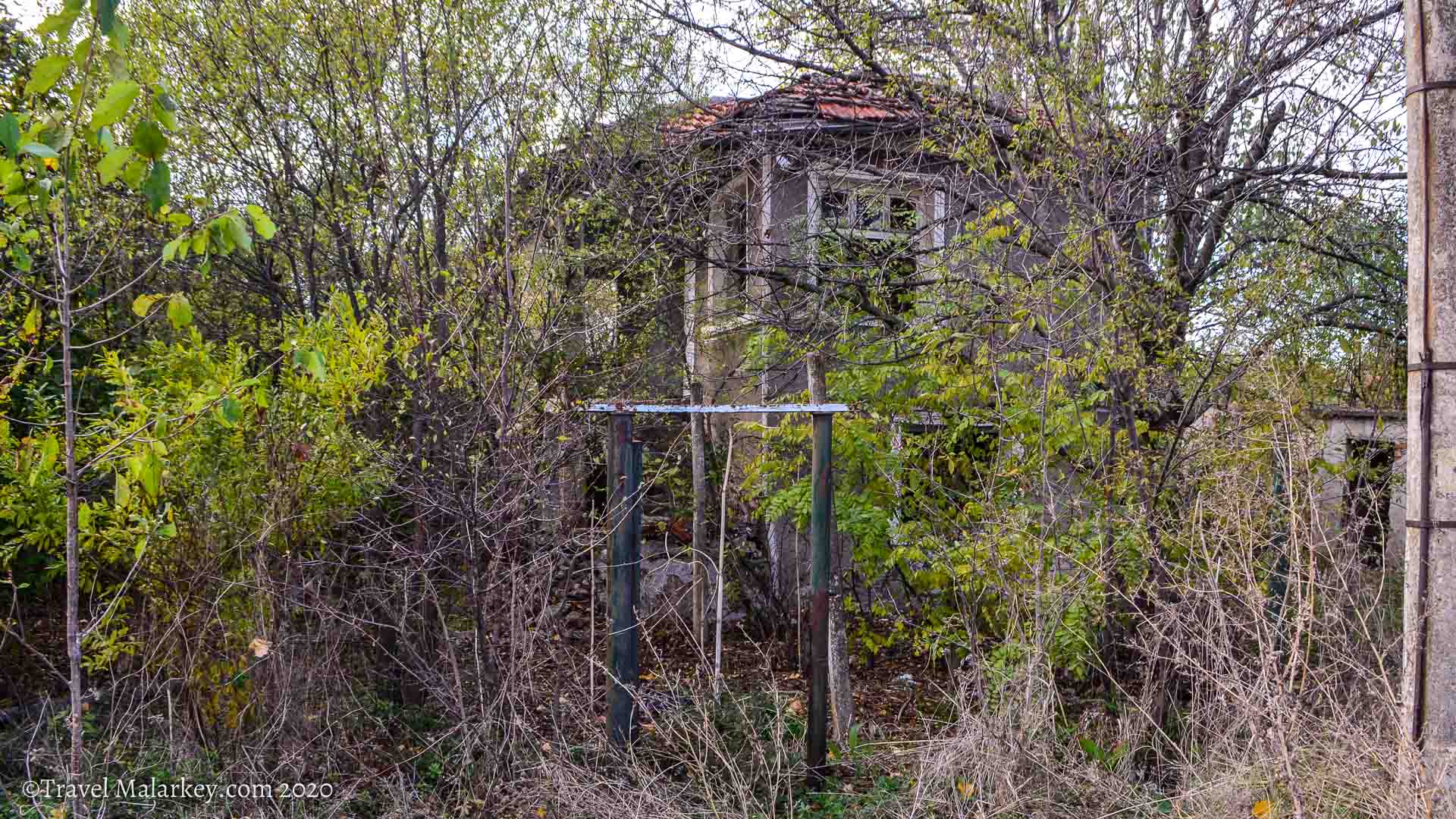 Once Upon a Time this had been very beautiful

So I messaged Terry back. Told him I’d been thinking. And we had a chat.

There’s nothing on paper yet. I need to find a lawyer to sort all that. Terry doesn’t know how it all works, and neither do I. But we have a “gentleman’s agreement”. And Terry is a good egg. As we’ve already established.

So today we went to Mr. Bricolage and bought a chainsaw. The modern equivalent to a machete. And a tiny generator for Iggy’s batteries on the days when the clouds cover the winter sun.

And we slung in some garden shears. Secateurs, big and small. An axe, a saw, a fork and spade. And a whole lorry full of laughter, love, hope and dreams.

Hmmm… I’m a bit scared of that!

Tomorrow Jay will go back to the ministry building in Blagoevgrad and collect his Bulgarian residency card. And then we’re heading East. For the little village of Miladinovsti, where a broken old house lies waiting for us, at the foot of the Monastery Hills.

We’ll spend the coming lockdown cutting some space in that garden. Finding a lawyer, speaking to the mayor, checking out water and electricity… Drawing up plans for how it’s all going to look. Where the vans will go. Where we’ll build the firepit. Where we’ll make a space to welcome you all, to our new home.

A place for all who wander. Where people are always seen as “well met”. Wherever they came from and wherever they go. Where we shall try and honour the previous owner. Put a little bit of his generosity of spirit, and kindness to his fellow man, into every bit of everything we do there.

And, of course, put right over the gate. In big carved letters for all to see as they come visit, at “Terry’s Place”. 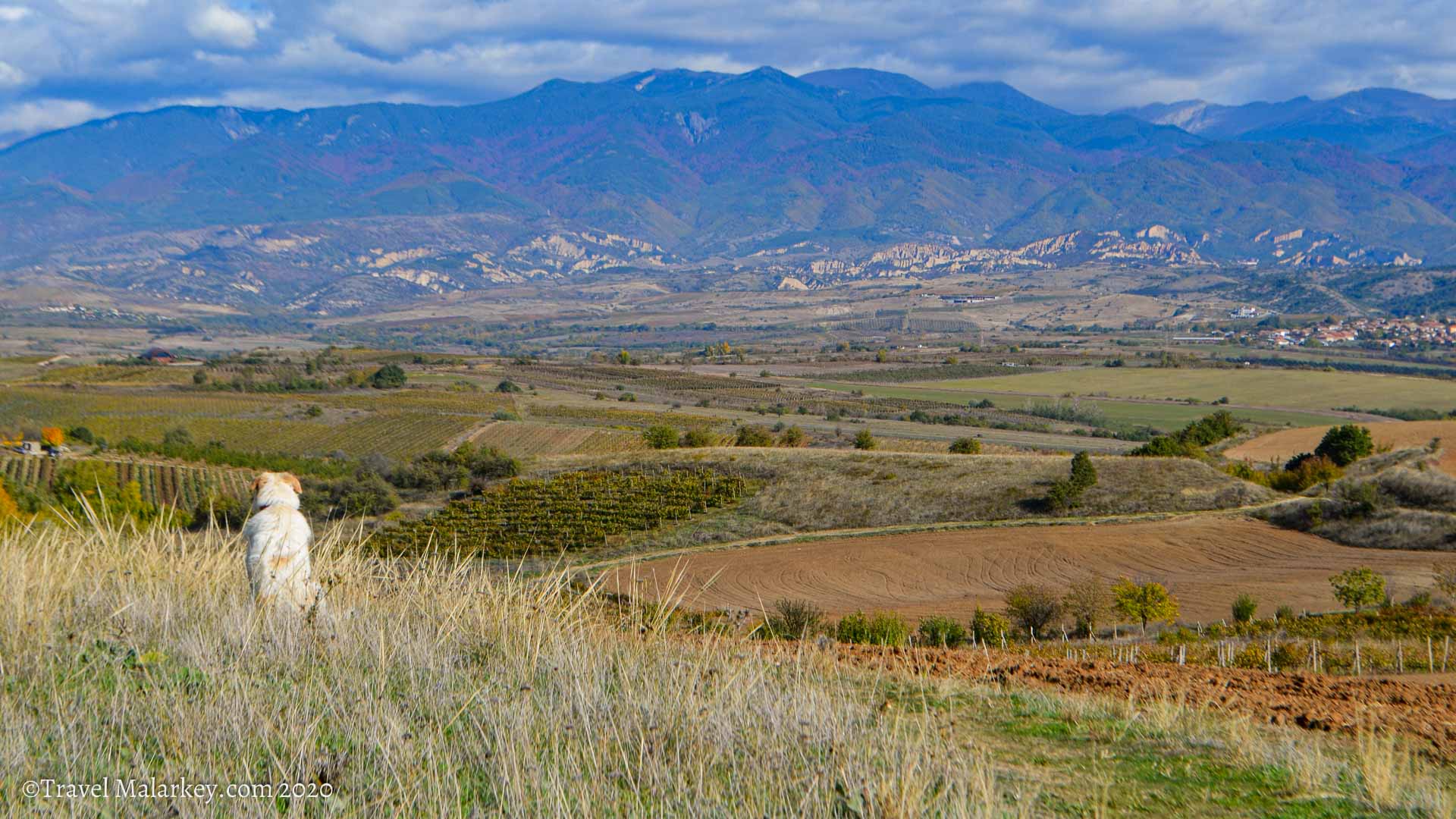