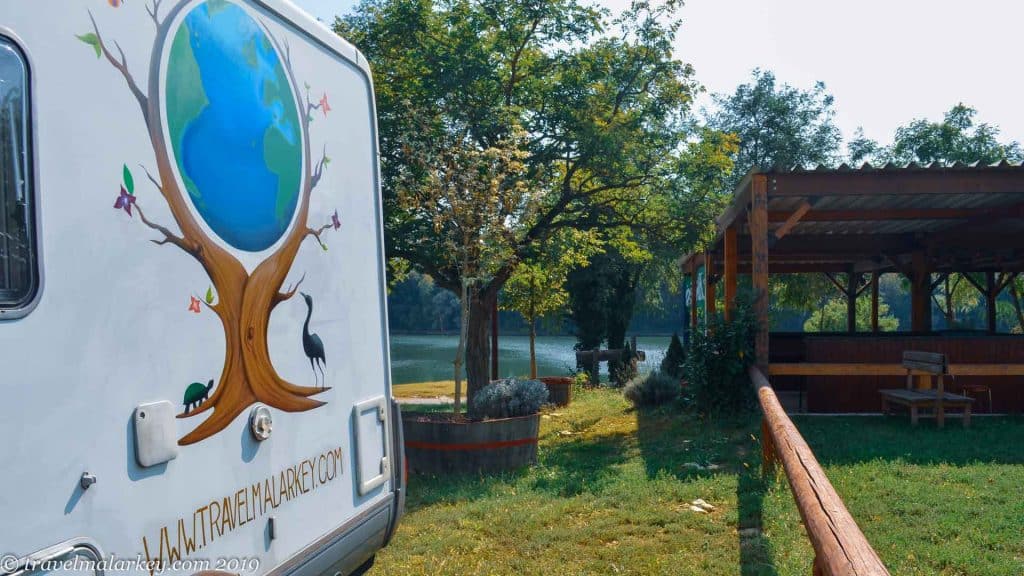 Wednesday the 11th of September and we woke, thankfully not hungover, in our hotel car park in Croatia. Today’s plan was for another long drive to a place called Camp Borovik, not too far from the Croatian border. Park4night said it was not a campsite, but a restaurant beside a lake, where campers could stay in exchange for buying a meal.

Long days of driving were becoming a habit as we trundled our way southwards for Greece. We just did not have enough time to linger, but it was still good to see what the countries were like. What to expect if we came back for a longer visit one day. Back on the road our chances of ever wanting to return to this part of Croatia were looking slight.

I’d been googling a little bit of the history of the former Yugoslavia countries as we drove. It’s a complex history, and one that I would need to do a lot more reading to even begin to have a basic grasp of. But as we drove through the flatness of north east Croatia we wondered if we were witnessing the Socialist heritage of the country. Or if this was just how things were done around here. 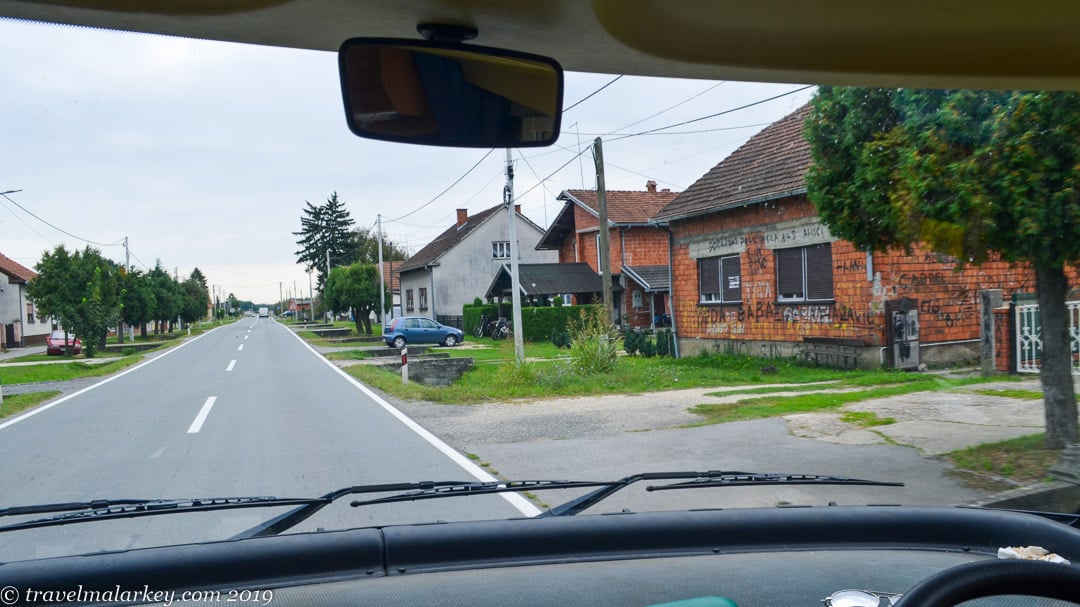 Uniformity was the word that kept swimming to the forefront of my brain. Every mile we drove was marked by a uniformity that I found uncomfortable to say the least. I’ve always been a pusher at boundaries. A non-joiner. If you wear red then I’ll almost certainly wear blue. Even though red is a colour I find myself particularly drawn too.

I was going to get my nose pierced once upon a time. But then it became fashionable. So I didn’t. I’m one of life’s natural Bohemians. Floating round the edges. Looking for paths that are just a little rougher. Just a little less travelled. Conformity makes me nervous. Gives me a feeling of being trapped.

And here in Croatia conformity seemed to have been almost a religion until recent times. The villages were all laid out in the same pattern. The same houses lined the same streets. Each with a barn, and a smallholding running down the back. The same structures. The same sizes. The same distance of grain fields and patches of wood seperating one village from the next. 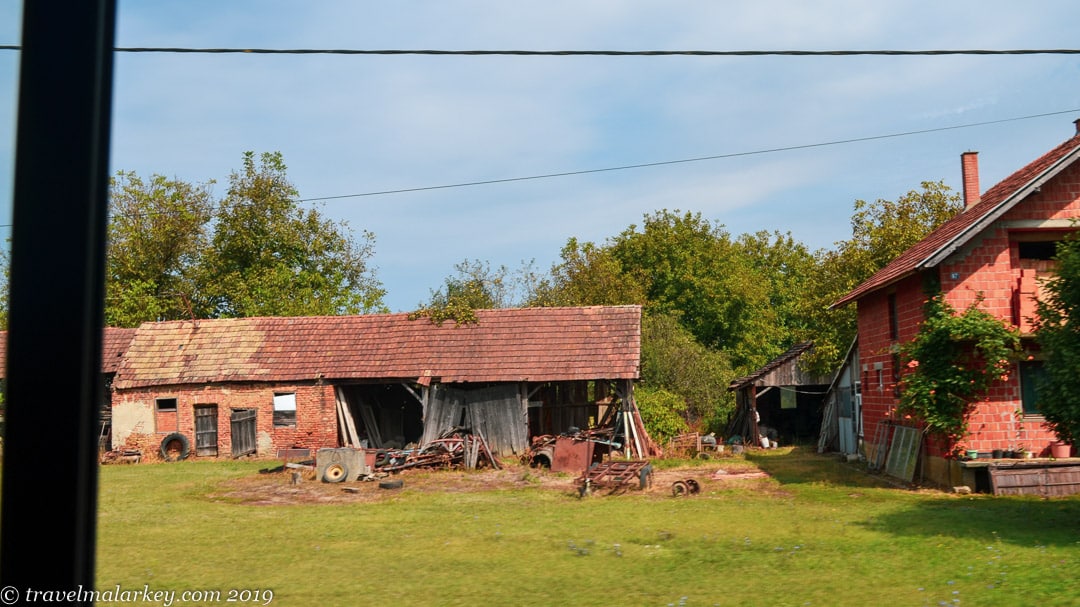 Here and there among the more modern red brick buildings, there were dotted much older ones. It looked to us as though at some point the land had all been equally parcelled out. New smallholdings built to mirror the traditional ones. And all laid out in uniform lines on either side of uniform streets. It was fascinating. But it kind of gave me the heebie-jeebies at the same time.

And here and there people were laying their mark of individuality on their homes. And on their towns too. This house was painted yellow. This one blue. Some houses had garden ornaments cemented every few inches around the walls. This village had silhouttes painted round the walls of the school and the shop. This other village had a giant painted egg on the street. 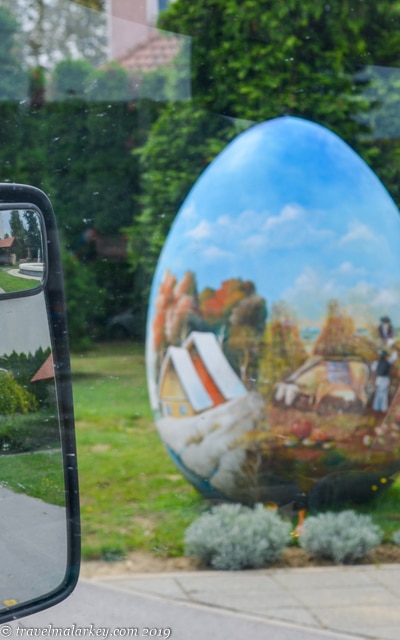 But mostly there was just the fascinating, slightly eerie, uniformity. 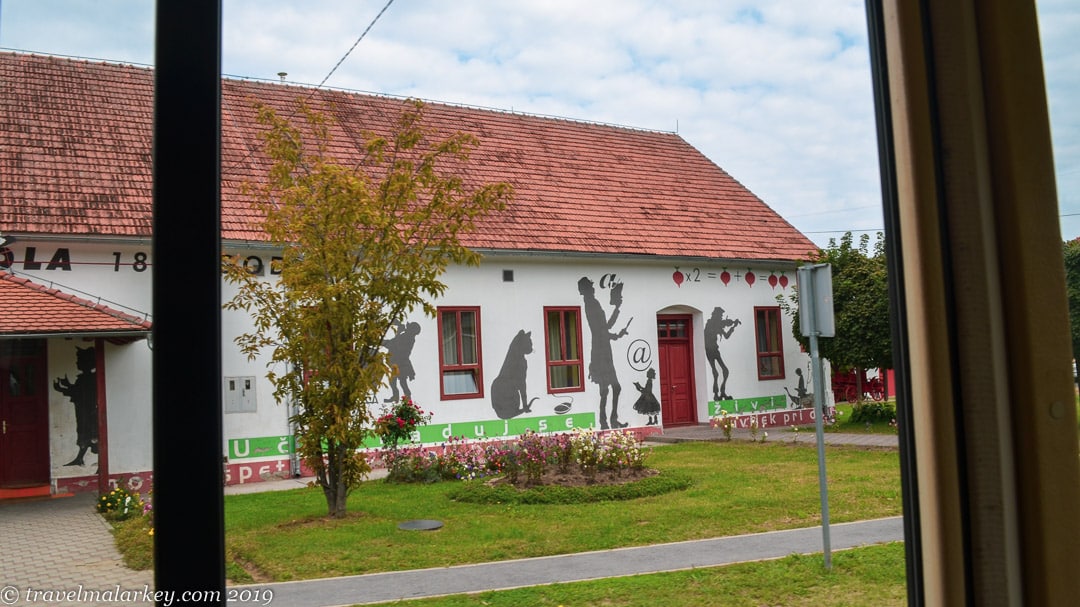 Time ticked on, and we were getting closer to where the main road would turn off onto a smaller one for the lake and Camp Borovik. Suddenly the identical house lined road under Iggy’s wheels became a little bit less identical. The metalled surface was gone, dug up by the heavy machinery we could see ahead. The road was being re-laid, but there were no signs, no detours. A white van was driving down the road in front of us. A yellow one was coming towards us, one side of the road blocked by diggers and such, merrily carrying on working as the van slipped narrowly past them through the gap they had left.

The white van waited, and we waited behind. But as the yellow van came through the gap, the road building machinery filled up the space. A man in dusty jeans and t-shirt shook his head at us and the driver of the white van. Go back – he signalled. The road is now closed.

Another fifteen minutes of driving around a town with no detour or road closed signs, but two more closed roads, and I directed Jay onto the last possible escape route. Or the last one that could connect us back onto our route anyway.

We had that sinking sort of feeling that maybe we were going to have to drive fifty miles backwards, just to go forwards. But surely not? Surely the last route south east would still be open? 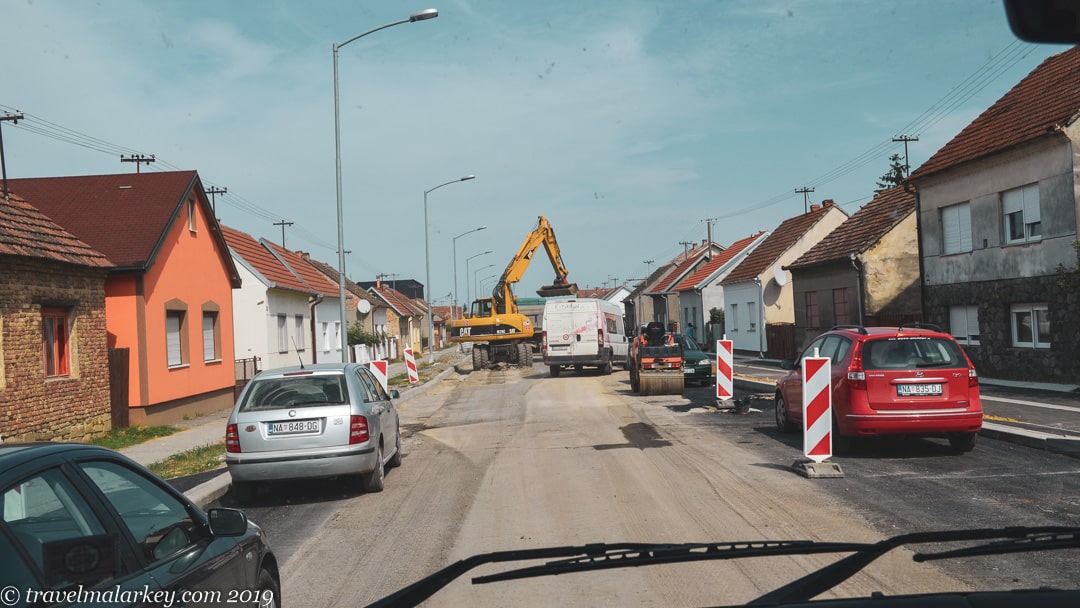 As we approached the junction we could see a HGV turning the same way. That was a good sign. And then a car followed. And another truck. Our turn came and hallelujah, we could see traffic coming towards us too. And a good few HGVs which is always a good sign that a road is open, and passable.

Sure enough the way was clear ahead, and before much longer we were on the last road to Camp Borovik. The land began to swell into rolling, forest covered hills. The road stayed easily passable. And then the lake appeared in front of us. We swung just to the right as we reached it, and there was Jesus. Standing, arms stretched wide, to welcome us in. 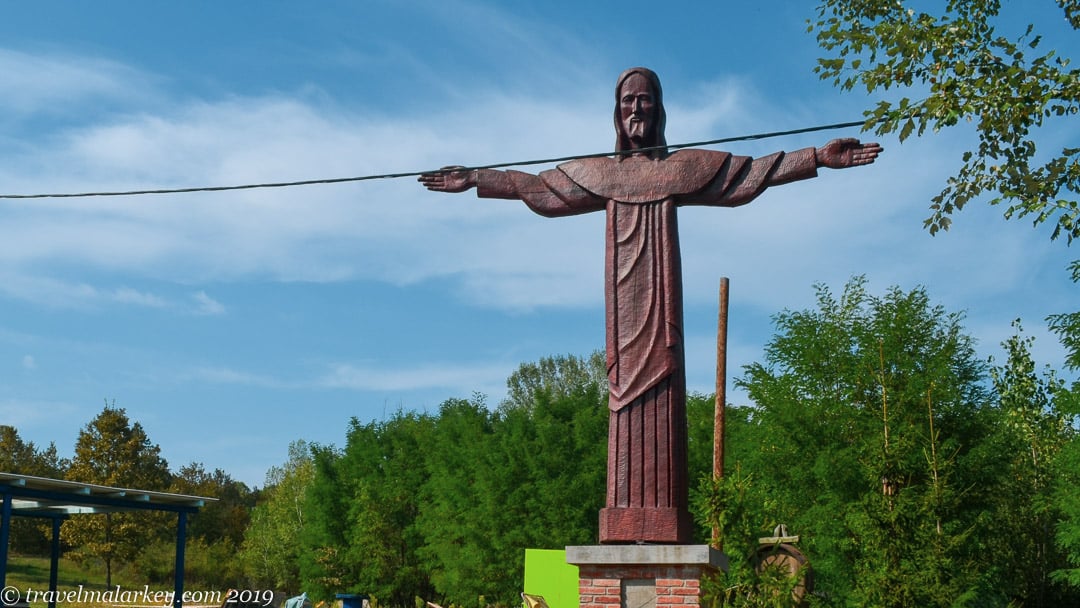 Camp Borovik wouldn’t be everybody’s cup of tea. But if you like a little bit quirky, a little bit ramshackle, a little bit NOT health and safety, and a big bit beautiful lake, then it would be right up your street. 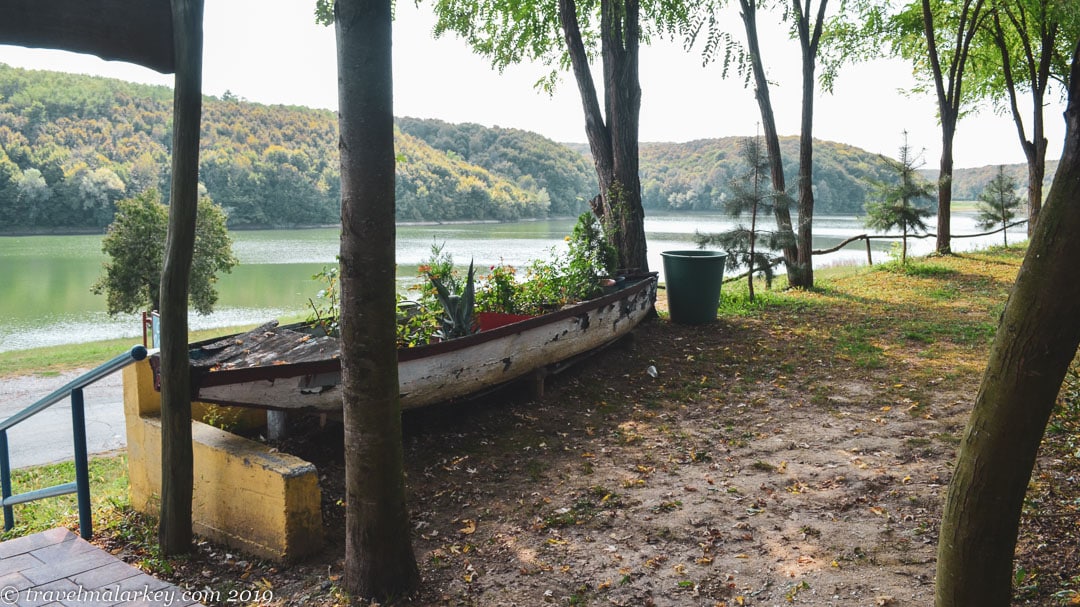 It has the appearance of a project constantly in the making. Though in fairness to the owners it looked like a lot of pre-winter work was being done. A group of workmen were installing huge windows around the walls of one of the massive outdoor eating areas. Archery targets, and funny mirrors, outdoor games, barbecues and all manner of things were moved to the side for painting and maintenance. 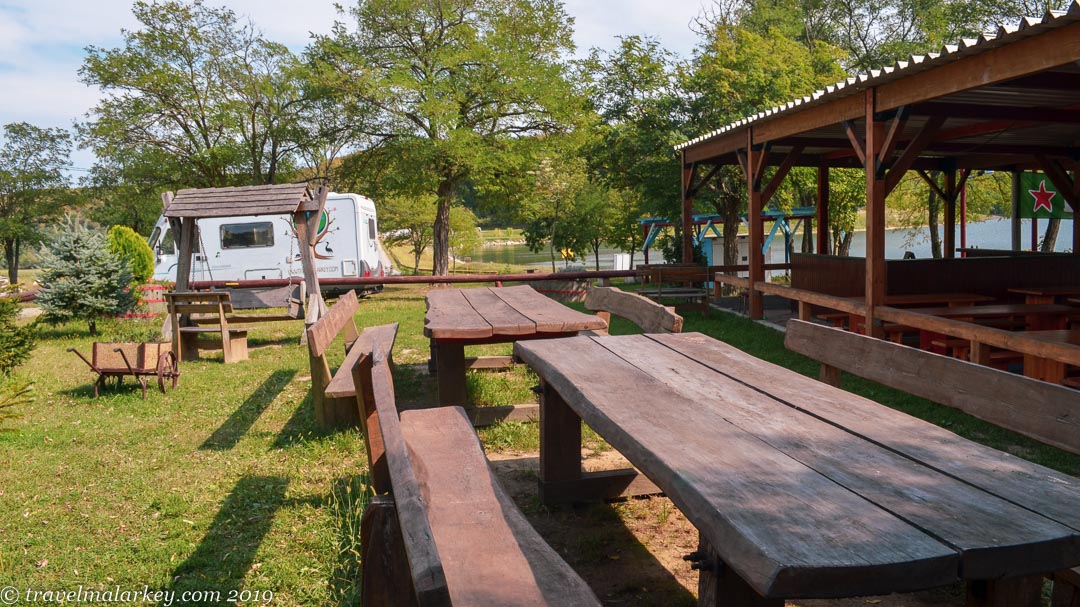 But the enormous carved Jesus was just great. The beautiful sturdy swing seat. The giant sized slabs of outdoor tables and benches. The friendly welcome. The “No problem” response to our request to stay in return for dinner. The childrens’ play park. The cosy indoor area at the bar. The position of everything – overlooking that beautiful lake. 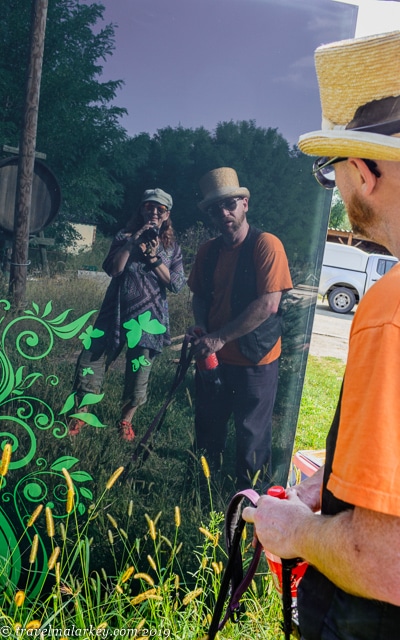 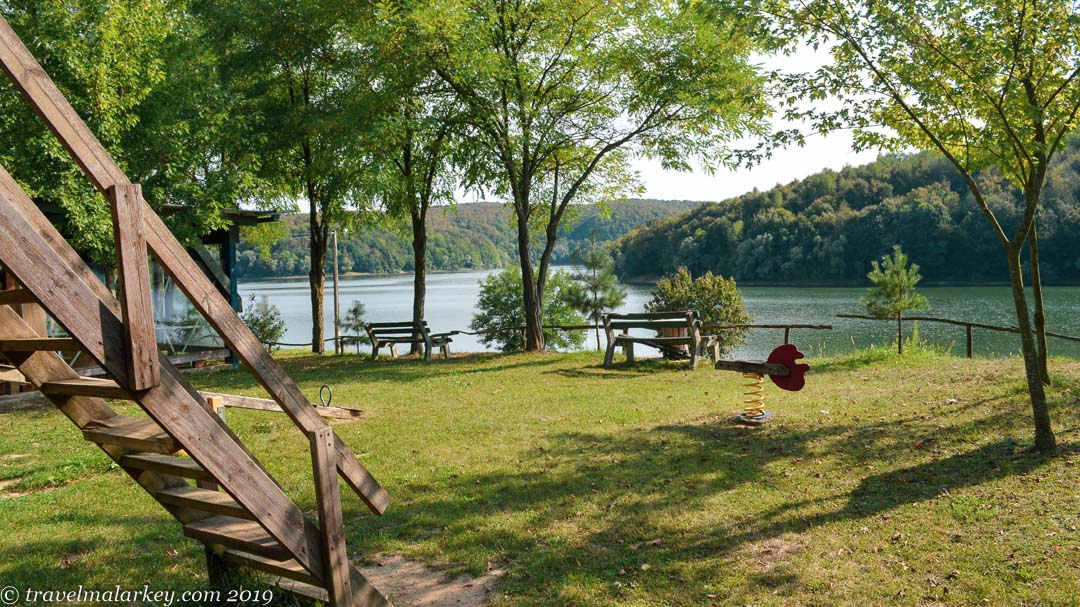 View from the playpark at Camp Borovik

We took Marley for a walk around the water, and she shot off like an arrow. Straight into the lake to ease off the heat of the day, then bounding round the shore, paws happily in mud. And just as happily back home again, to the smell of grilling meat at Camp Borovik. 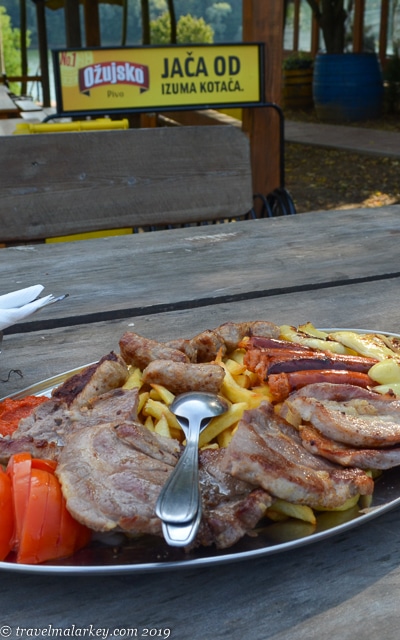 Once we could move again we went for one last stroll along the lake as the sun sank slowly downwards. Tomorrow we would leave Croatia behind, and continue our journey, on and into Serbia.

For tonight it was good to just be here. To wander home with the first bats darting around our heads. Sit on the big, old swing seat with another cold beer in our hands, catching every breathe of breeze that we could against the still hot evening. And finally to sleep. Every window open, every mosquito screen closed. The sound of the fans birring softly in the dark, warm, night. 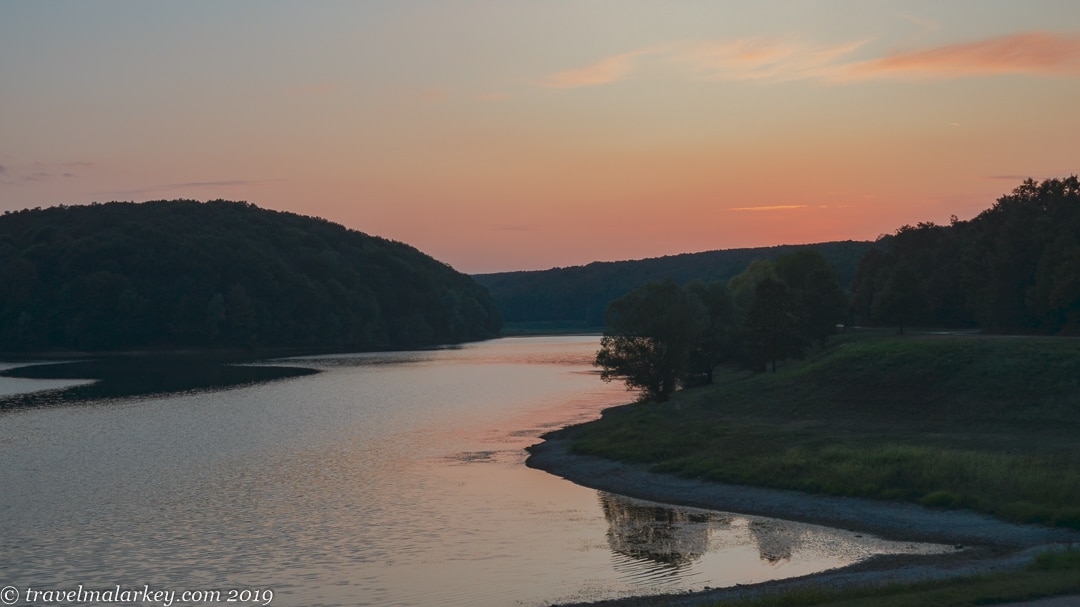