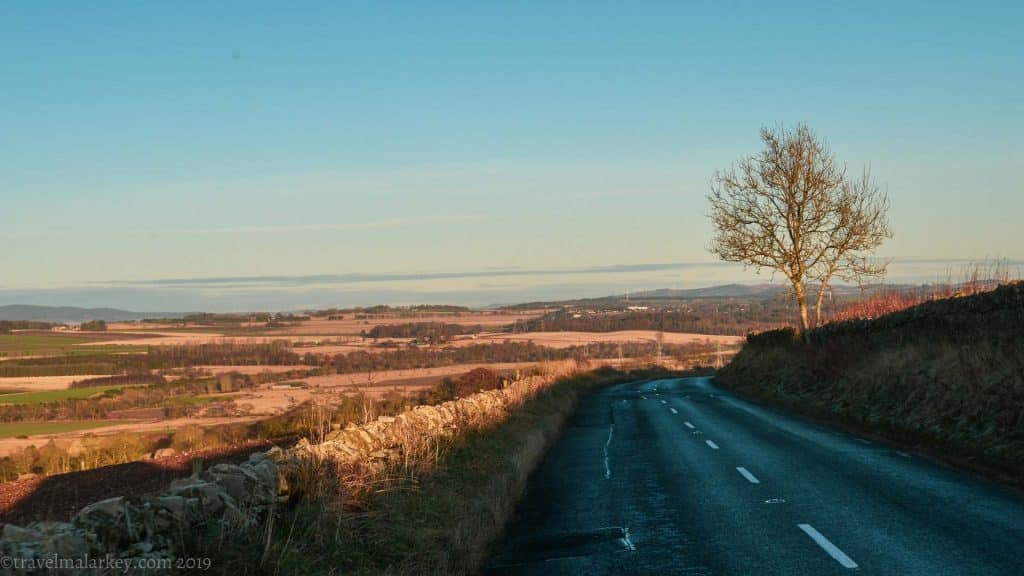 It’s four in the morning of Monday the 23rd of December 2019 and I am lying, wide awake, in my comfy drop down bed in Iggy the Hymer. Jay is off working a twelve hour nightshift, and Marley is dreaming doggy dreams beneath me. The night birds are twittering across the way, and from time to time an owl hoots softly in the city night. It is, in all ways, a normal day in our modern nomad lives.

Or as normal as a day can get when tight in the grip of a two week bout of insomnia, that has turned night to day, and day to night. I blame the shortness of the winter days up here above the 56th parallel, in Edinburgh and beyond. I blame the migraine that heralded this zombie like sleeplessness. I blame the skydiving, trapeze flying, helter-skelter, zig-zagging, sabotaging, perimenopausal, hormone fluctuations that cause the migraines.

The hormones laugh, and pull my body this way and that like a puppet on a string. The migraines ripple round the corners of my eyes. Twitching my eyelids open whenever I attempt to sleep. Night after night I try in vain. Day after day I fall asleep after Marley’s morning walk. By the time I wake up, the darkness of Scotland in December has fallen once again. 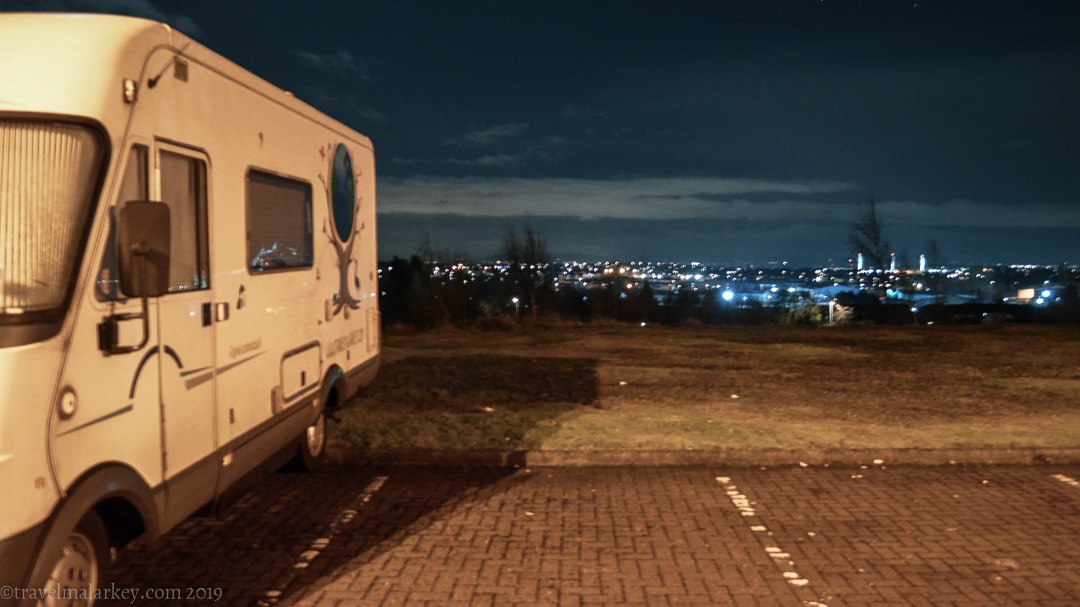 That’ll be five p.m. in Scotland then!

Every day I think longingly of writing the blog. Tomorrow. Tomorrow I’ll drag myself awake earlier and get out and about before the night comes. Take pictures, explore, find something to write about.

But inevitably, come the morning, the migraine switches from full zombie, vampire alertness, to a sleep so deep you’d have more chance of getting a four minute mile out of a sloth than of getting me out from under my covers. And my laptop sits, sadly, forlornly, abandoned in the cold, dark depths of our “Tech cupboard”.

I’ve been a long time at this writing game, and I should have realised sooner what was going on with my inability to write the blog. Yes the insomnia was real, the migraine, the horrible hormones. But I’ve had these things before, and written ten times more than ever. None of these things stop me from writing. Pretty much nothing stops me from writing. I love writing. Writing is my happy place. My go to. My raison d’être. There is only one thing that stops me from writing… The dreaded Writer’s Block.

It’s a rare thing for me this writer’s block thingummy wotsit. The apparent complete inability to physically put words into being on a page. But I’ve found over the years that – for me anyway – it seems to herald some kind of a change. A change in me. A growth spurt I suppose you might say. Like the pains we used to get in our shins as children. Writer’s block seems to be a shutter that surrounds creativity during a period of transformation – of moving from one phase of life, one phase of being to the next. 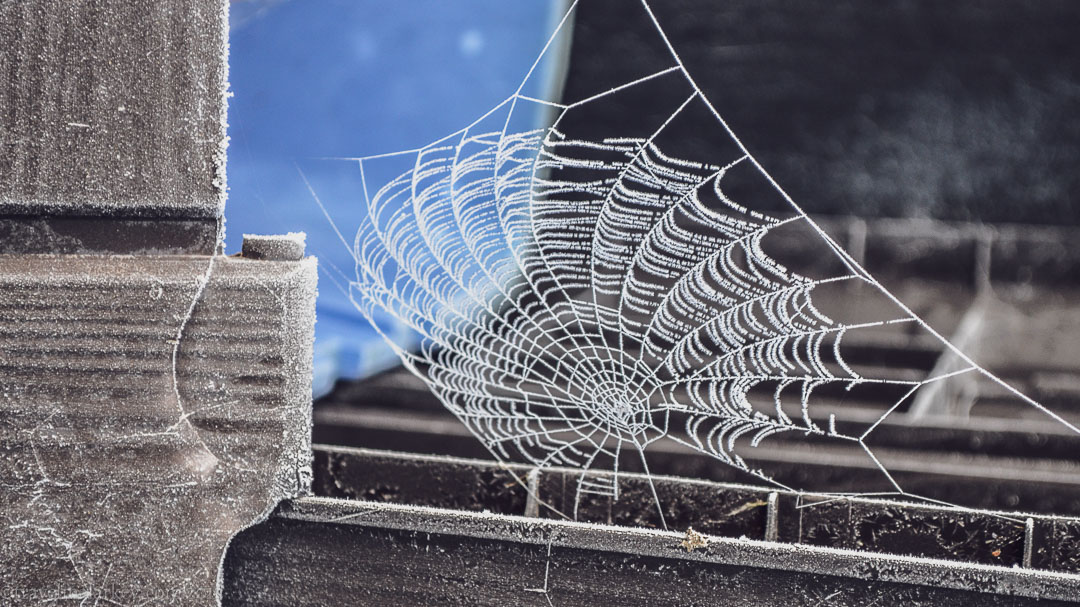 I must have seen something worth writing about!

And so, this winter’s afternoon, as soon as I realised I was in a block I knew I had to start writing. Put fingers to keyboard and just write. Anything! Just get things moving again. But what could I write about? What was I doing that would make an interesting story? I couldn’t think of anything at all to say. There was just me. Me, and Marley, and Jay. Trundling around in our ordinary little day to day lives in Iggy.

And boom! Just like that a wave of realisation washed over me. Or crept over me slowly perhaps. More a soft, warm, cobwebby blanket of a thing really. Slipping upwards from my toes. Snuggling in like a purring cat and whispering in my ear…

“This is normal now. You’ve changed. You’re not a house person anymore. You’re a nomad.”

A nomad. And there we have it, the change, the transformation, the reason for my writer’s block. After 977 amazing days, our extraordinary, wonderful adventure, had become our everyday. And somehow I had come to believe that our “everyday” was no longer a tale worth the telling. I mean to say! Why would anyone want to hear the details of our ordinary days? 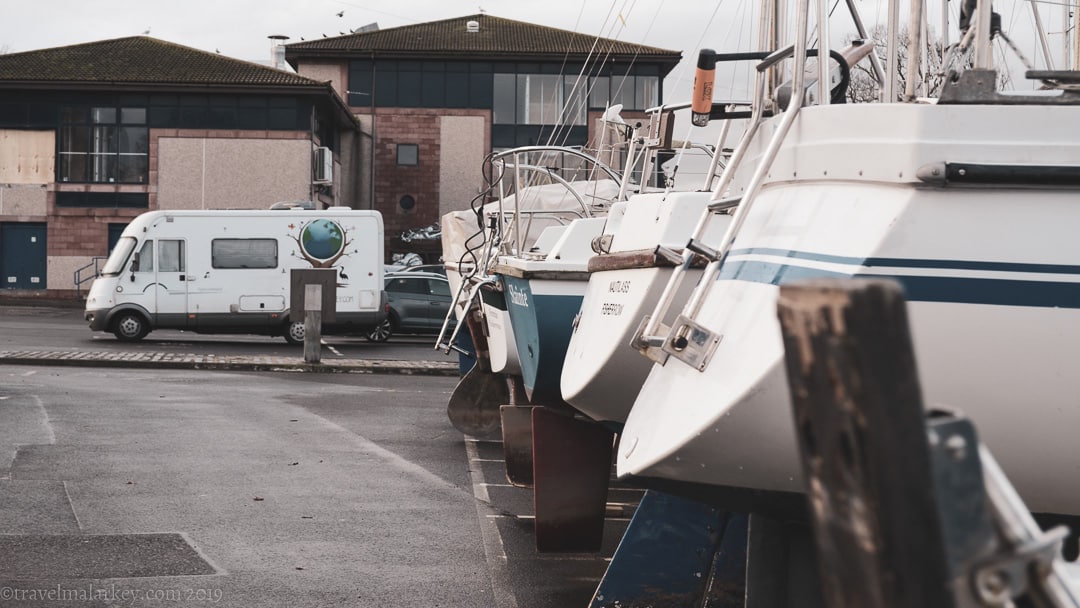 Just nipping down the harbour for some water. As you do.

It is later now, just past eight o’clock and Jay has returned from his night shift, bringing the smell of talcum powder, soap, and fresh morning air. I let him take Marley for a quick walk, not letting on that she and I have already been out this morning. Ghosts slipping through the five a.m. quietness of the docklands where we’re parked. Up along the cycle paths, veins of green where the old railways used to run across the city. The birds singing enthusiastically for a dawn still some hours over the horizon.

The morning traffic was starting to build up as we made our way back to Iggy. I needed to charge my laptop to finish writing my story, and ran the engine for a fifteen minute boost to the batteries while the Mocca pot gurgled up morning coffee on the stove. The laptop is too powerful to use while it’s charging off our small 120 watt inverter, so I made the breakfast porridge, and cleaned down the cooker while I waited. 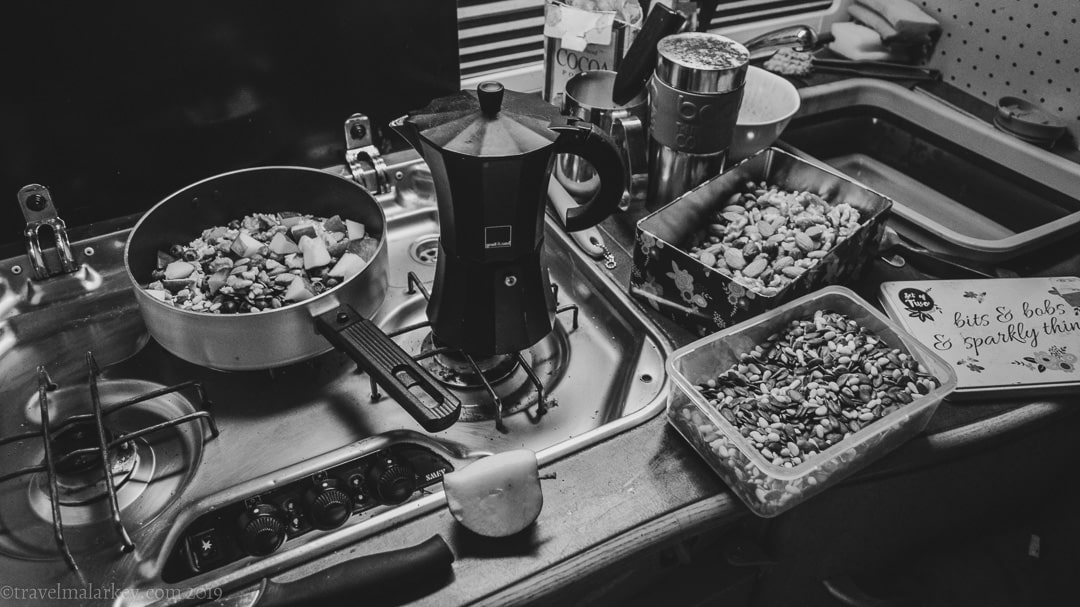 Normal. Everyday. We don’t think about it much anymore. Checking the batteries. Checking the water tank. Counting the days since the gas was filled up. Is that the first toilet cassette we’re using? Or the stand by? Is there enough water for a shower? How little does it take to wash the dishes? Are there bins in this town? Do we need to find a launderette? Or are there clothes enough for another few days?

It’s not so much that we don’t think about it anymore, but that thinking about it has become second nature. We know when to check, and when we don’t need to. People in houses look in the fridge and shout to each other “Can you pick up some milk today?” Our domestic chat goes more like…

“Jay where were we when we got gas?”

“Erm.. Not sure. Was it Livingstone?”

“Oh yeah. It was, ’cause we went to the launderette after. What day was that?”

“Dunno. The day I got that nightshift in Arbroath? Tuesday?”

“Yeah I think you’re right. Will we grab some today then? When we’re passing that Shell on the way to Hawick? We’re still on the big bottle, but it’s been five days. Must be about due to run out by now.”

We think about it all the time. But we don’t notice it the same way. It’s not different. It’s not… so exhilirating. It’s not mind blowingly novel anymore. It’s just normal now.

Like waking up in the night as the wind gets up and starts to rock the van. Like not being able to hear the movie because the rain is so loud on the roof. Like not having a heart attack because the dog has covered the sofa in mud. Like sitting quietly when some stranger bangs on the side of the van – knowing they’ll most likely just giggle and run away. Like feeling guilty having a “house” shower and using so much water! 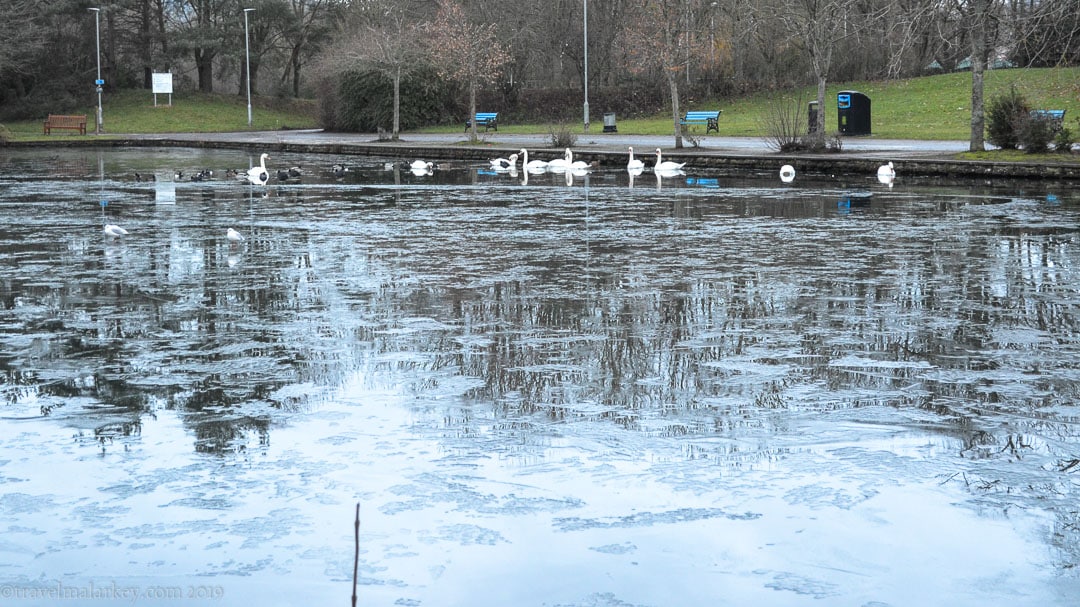 Banging on the van in the night. This in the morning. Normal Nomad life.

Normal is missing family. Finding myself someplace I used to go, and knowing I’m a stranger now. Walking past the bars and cafes full of friends meeting up for a drink, a meal, a chat… and being okay with not being part of all that anymore. Normal is treasuring each moment we do have with friends and loved ones. Breathing it in whole and sucking it into our hearts. Normal is big, tight, hugs goodbye.

And normal… is changing all the time.

I wonder what it will bring us tomorrow? 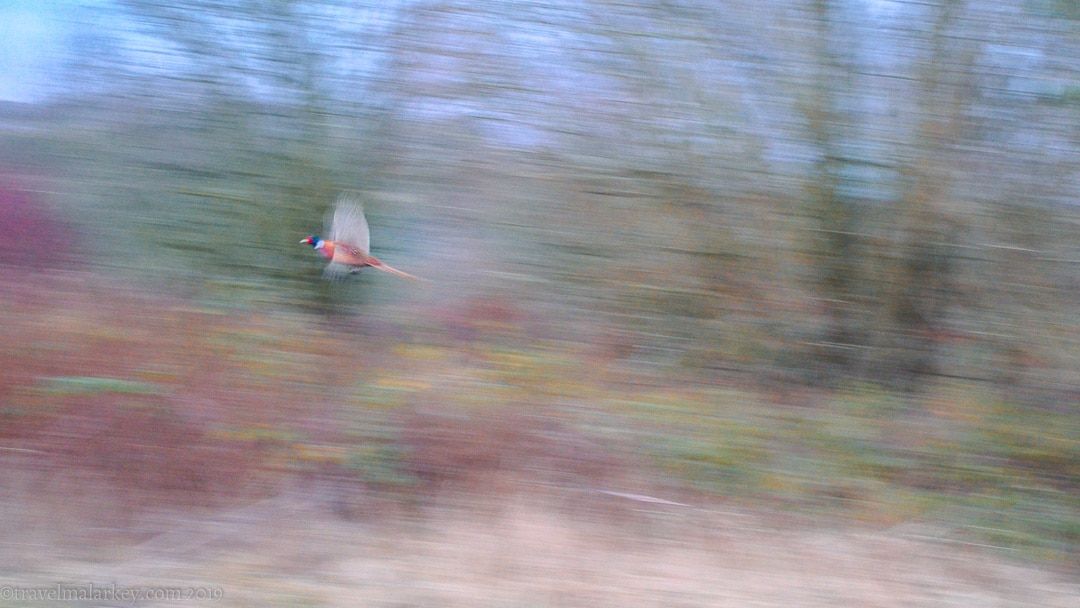