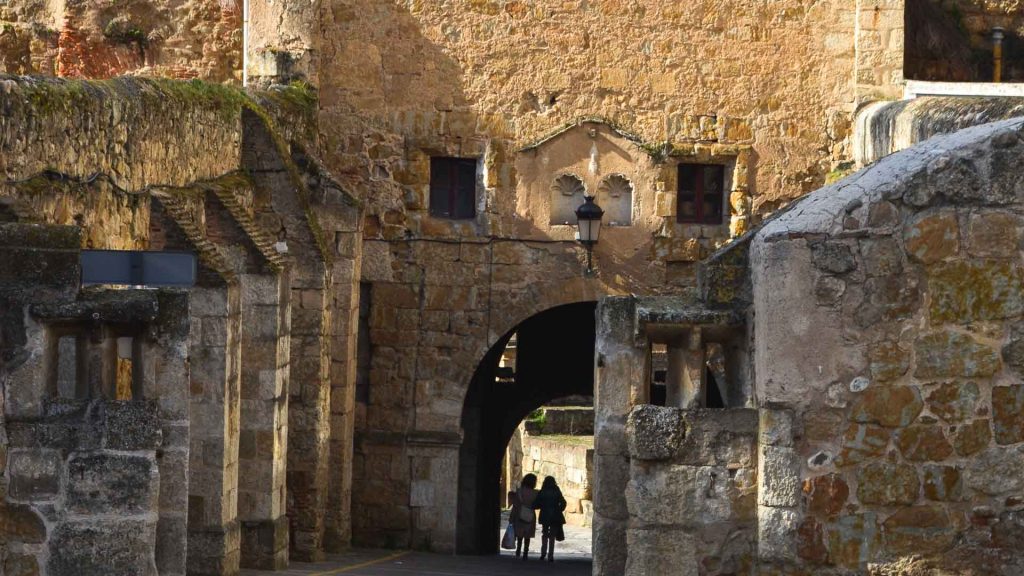 Iggy the Hymer motorhome started today  bathing in the smell of fresh brewed coffee in a carpark in Salamanca. Jay was making cappucinos for breakfast to go with the Canas de chocolate, and oranges that I had fetched from the nearby store.

It was a dull morning, but mild, and the sun was working hard to burn away the clouds overhead. Marley and I had been for a walk along the river – minus camera unfortuntely – as groups of herons, egrets and cormorants all burst from the banks around us and took morning flight across the water.

Yesterday we had asked everyone on our facebook page should we keep heading South?  For Cadiz and Gibraltar? Or take a West turn and follow the beckoning signs for Portugal?

The result has been a pretty emphatic two to one in favour of Portugal! So as soon as breakfast was over and everything snugly stowed away then West we went young man! Or middle aged man, woman, huge dog and one, very noisy, mouse…

And so it was that just an hour later Iggy trundled his way into Ciudad Rodrigo. An ancient fortress town an hour’s drive west of Salamanca and just 30 kilometres from the Portuguese border.

We were hoping to park up in the market square, just outside the historical city walls,but a fair was setting up and we would definitely have been in the way. 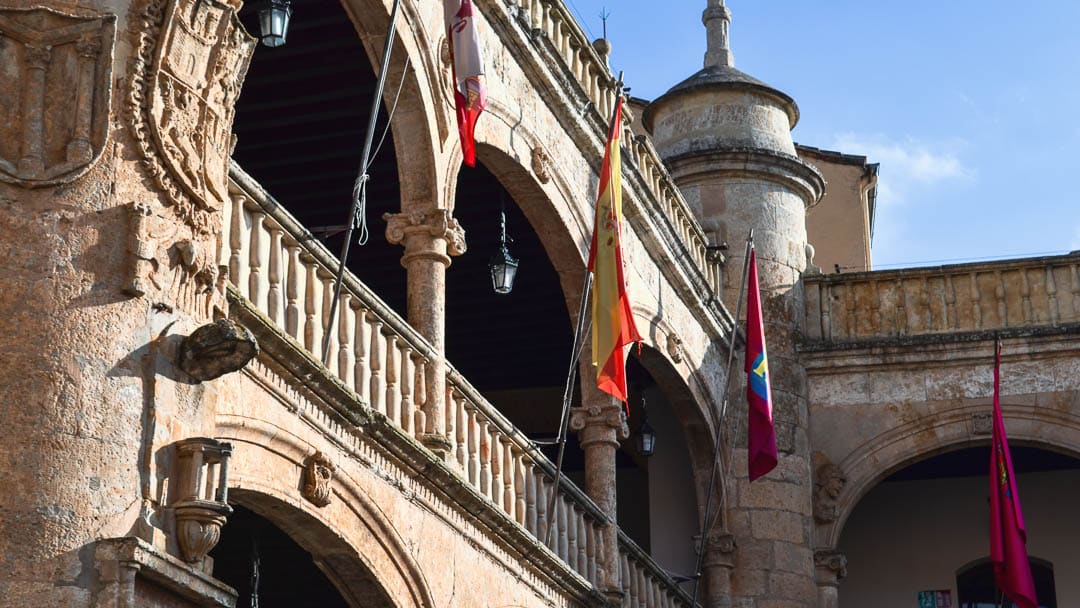 Ciudad Rodrigo had looked like a nice stopover for our last night before switching countries. I had a lot of writing to catch up on, and it looked interesting without being too time consuming. Oh me and my “not too interesting” spots!

I should have known by now that the chances of getting away with doing not a lot, were going to be pretty slim unless we just parked up in a modern, suburban supermarket for the night! Even then it would probably be the annual clown festival day! Hosted by the supermarket. In their carpark! 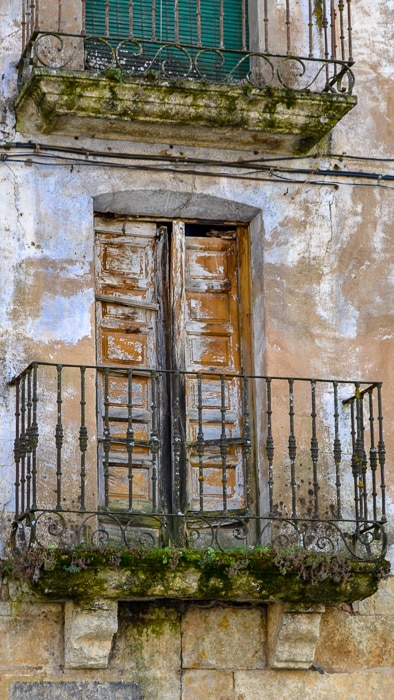 Ciudad Rodrigo then, naturally, proved to be a fascinating ancient city. Still nestled securely inside it’s fully intact 12th century stone walls, the entrance to the city is through the outer fortifications and moat. Immediately our attention was taken by the strange metal barriers running either side of the approach road into the old city. What were these? 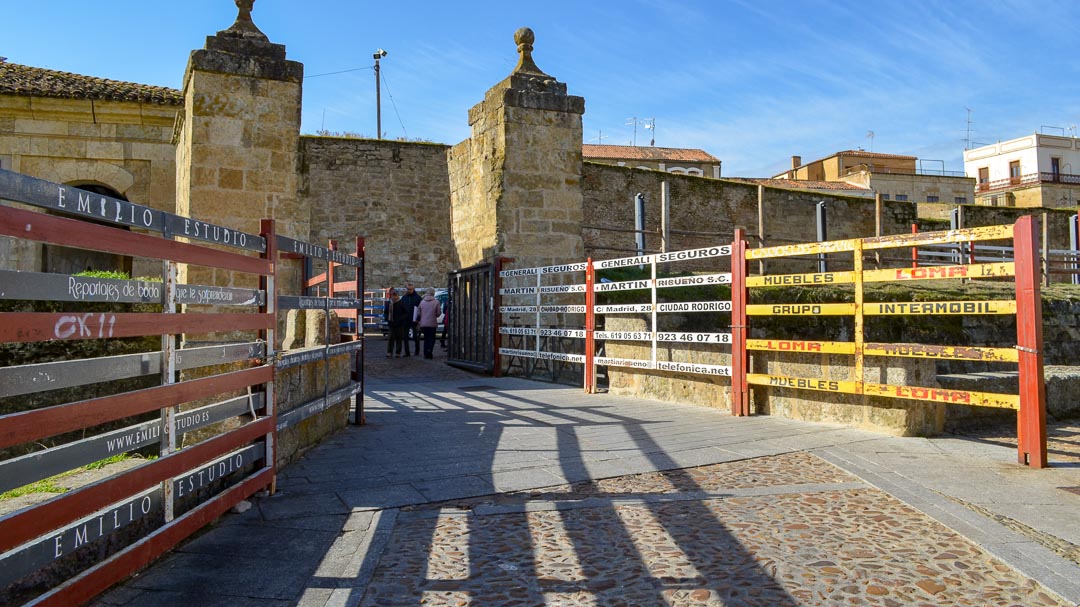 It didn’t take long for the answer to pop into our heads. Fences for a Bull Run. Either some kind of full on Bull torturing festivities had either just taken place or were shortly going to happen. The metal fences were covered in the names of local companies, we were in Spain, and there was a fair in town. Two and two was definitely looking a bit like four.

With a festival of the Bovine variety our top guess we proceeded on through the long, narrow entrance tunnel otherwise known as the City Gate. Or one city gate. There were, in true fairytale style four entrance gates, of various sizes, and all shared by people and vehicles alike. We waited for a car to drive through and then dodged hastily along the cobbles in the wake of an elderly Spanish local. 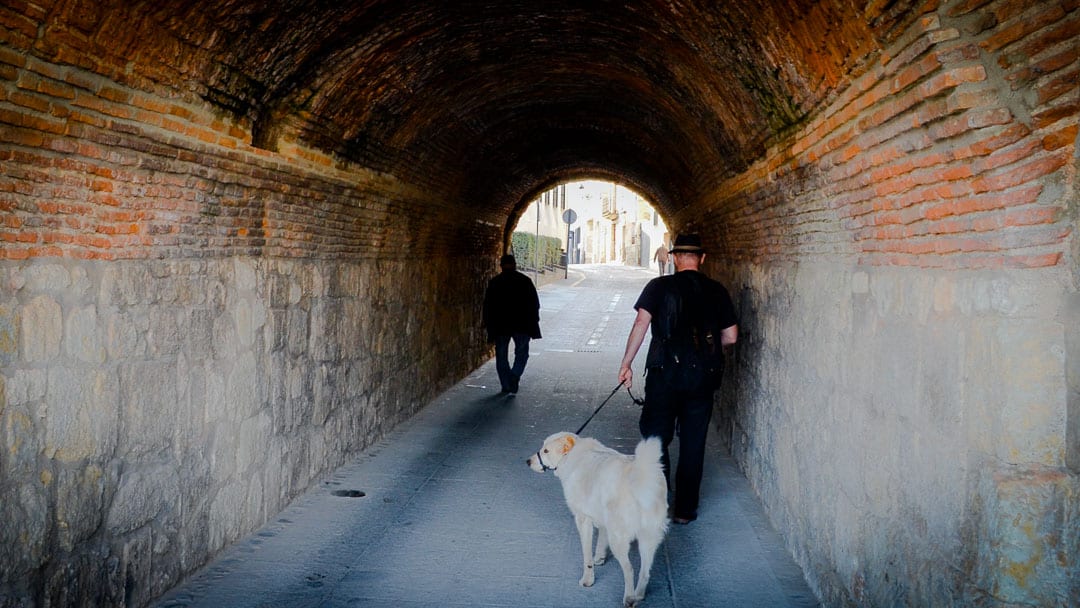 Quick! Don’t let him get too far in front!!

Our usual cowardly technique of avoiding death by traffic by stalking pensioners has proven pretty effective so far. There seems to be a general reluctance to run old folk over – no matter how crazy the driving! Though the habit of said old folk of apparently just throwing themselves into the path of oncoming vehicles without so much as a look can be a bit daunting to emulate!

This strategy has always worked so far though, and this time was no exception. We made it safely through the long, pavement-less, tunnel of potential death, and back out into the bright sunlight of the ancient city beyond. 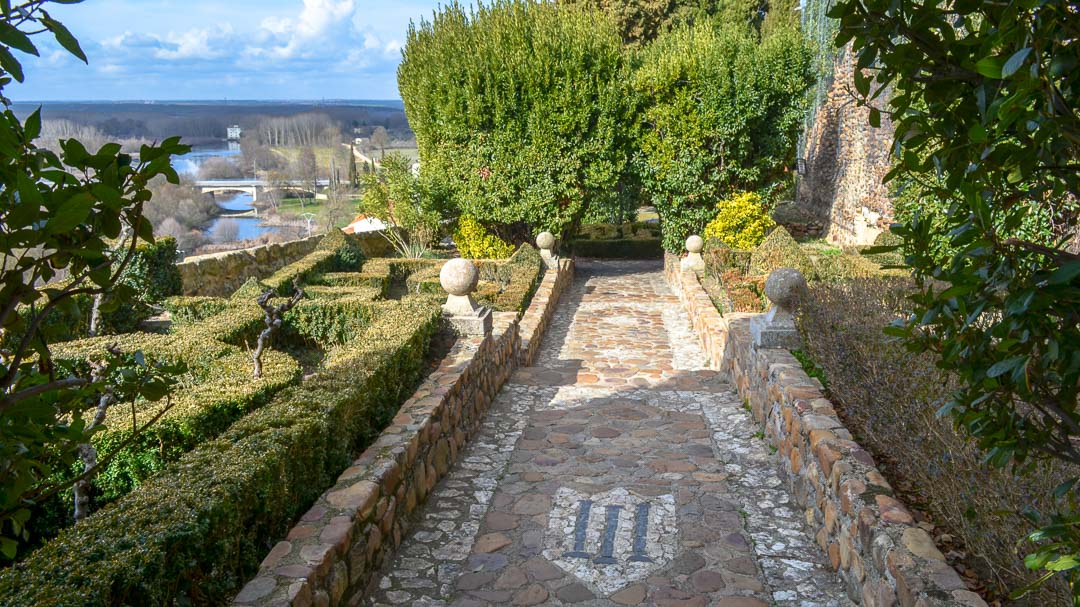 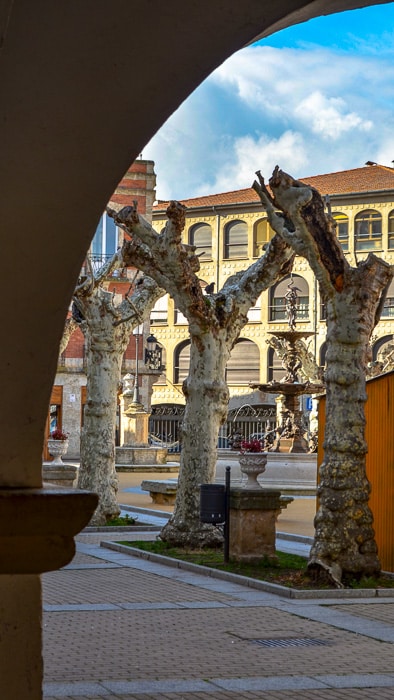 The desire to drop to my knees and embrace the life giving yellow orb in the sky was strong in me. Sadly my knees aren’t quite as keen on these shenanigans as they were thirty odd years ago, so I settled for taking lots and lots of photographs instead!

Tis a pretty old town without really trying to be is Ciudad Rodrigo. Encased in metres thick, 900 year old walls, and even longer history, I guess it doesn’t have to make any attempts to impress. It kind of manages that just by existing at all. 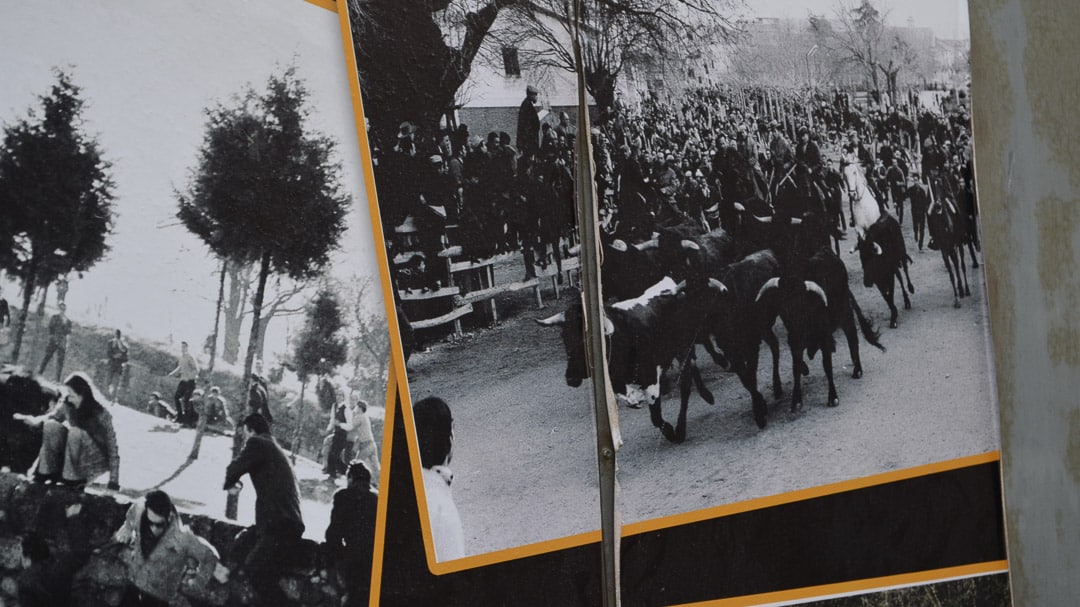 Old posters of bull torture throughout the years

Although we’d never heard of the city before, it was clearly on some kind of tourist path judging by the small, but noticeable, numbers of visitors for a February afternoon. More bull fences, and structures in the making around the streets and the main square, numerous posters and a quick glance at the town website confirmed that Ciudad Rodrigo is a bit of a contender on the Bull Festivities circuit.

There had been Bull Run/Fight events in the region, and the city, throughout February, and there was a three day Bull Carnival at the beginning of March. Ciudad Rodrigo had a history and tradition of the bulls being driven through the runs by men on horseback, and a beautiful statue outside the gates attests to this.

As we wandered the cobbled maze of the old city, past all the hints of the “festivities” to come I could only feel happy that we’d not arrived just a few days later. That we had not witnessed this undeniably cruel practice. Although the reporter in me, as always, would like to bear witness.

The smell is days old but as sharp as new. On Saturday, when the bulls return, it will be overpowering. 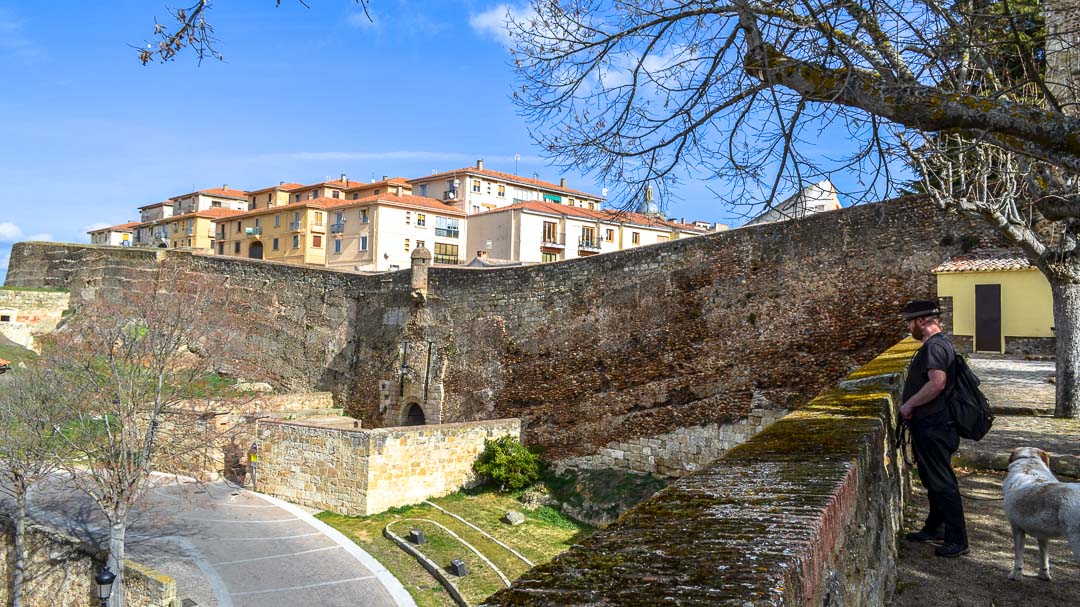 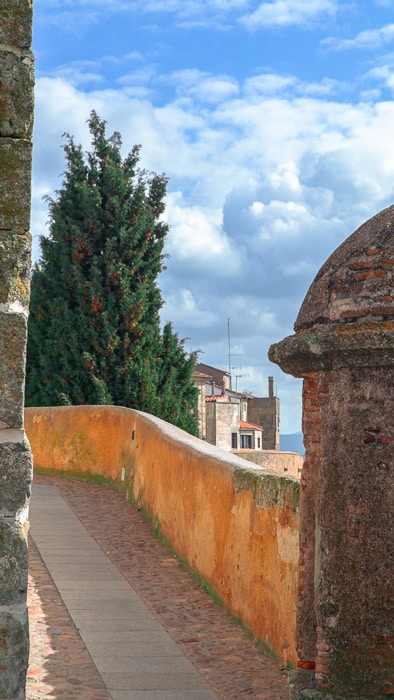 There is no smell inside the city walls on this day though. We spend five minutes squeezed against the side, on top of the walls, as an endless tour group of Spanish pensioners passes by.

Every third one stops to exclaim over Marley and stroke her velvet soft ears. People further ahead shout for the others to hurry up. A few more pass. They stop to stroke Marley. Repeat. Smile. Love life. Repeat.

Finally the long, “When I’m ready”, line of happy wanderers passes, and we continue our stroll. Storks clatter their beaks in accompaniment to our footsteps. Butterflies flit, will-o-the-wisp fashion, teasing us to follow, and a darting, gleaming, family of tiny wall lizards scatters from their afternoon feast of ants as we approach. 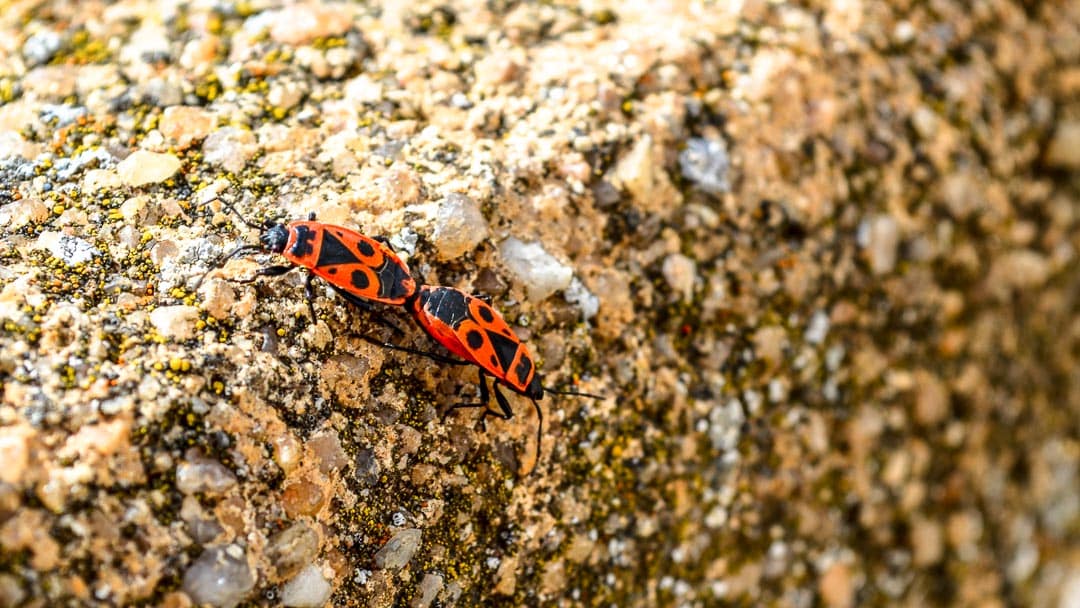 Back in the main square we sip wine and talk about bull runs until the couple at the next table join our conversation. Married for fifty years and in their late 70s, they hailed from Durham, and were touring by car and hotel on their way to a family visit near Nerja.

One glass of wine turned to three as the hours slipped by and they filled our ears with stories of their travels across the continent. First with caravan, then motorhome and now the car and hotels as they found it easier these days. 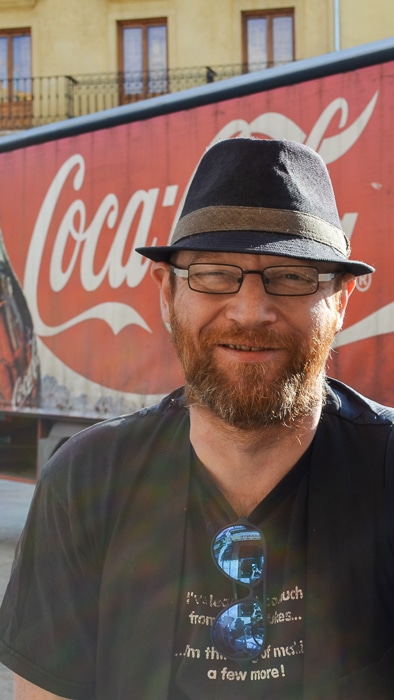 Sometimes photographs and details, and even names don’t matter. Sometimes all that matters is the old rock and ancient olive trees, the afternoon sun, the ruby shine of the wine, and the passing of time in good company. 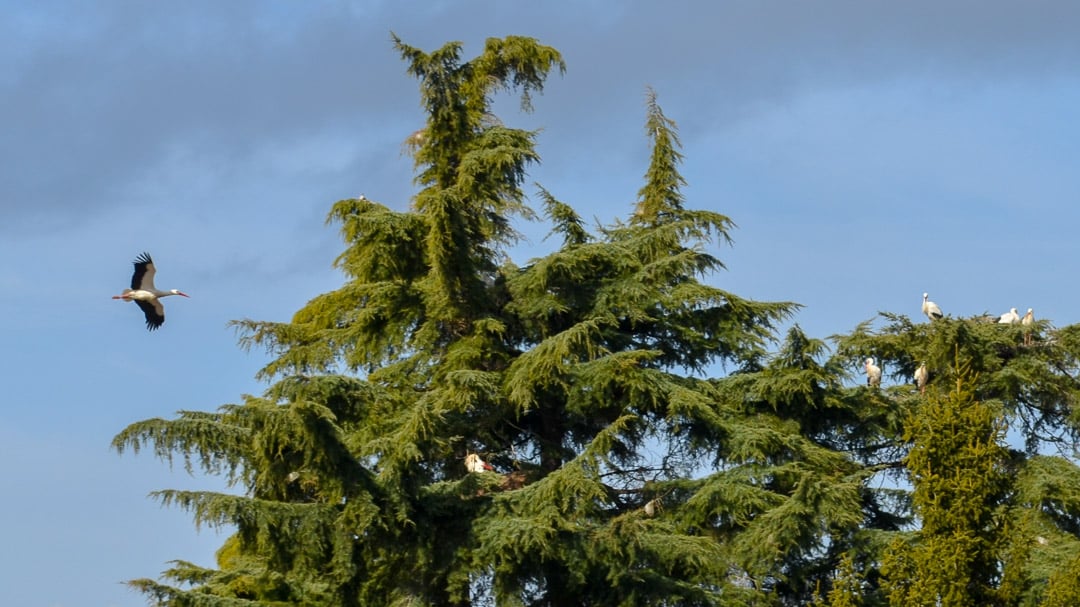 Want To Get All Our Latest Motorhome Travel Tips, Articles, Location Info & Exclusive Content?
We promise to send you no more than one email each week. We will never give your Email Address to anyone else. Easy unsubscribe at anytime.