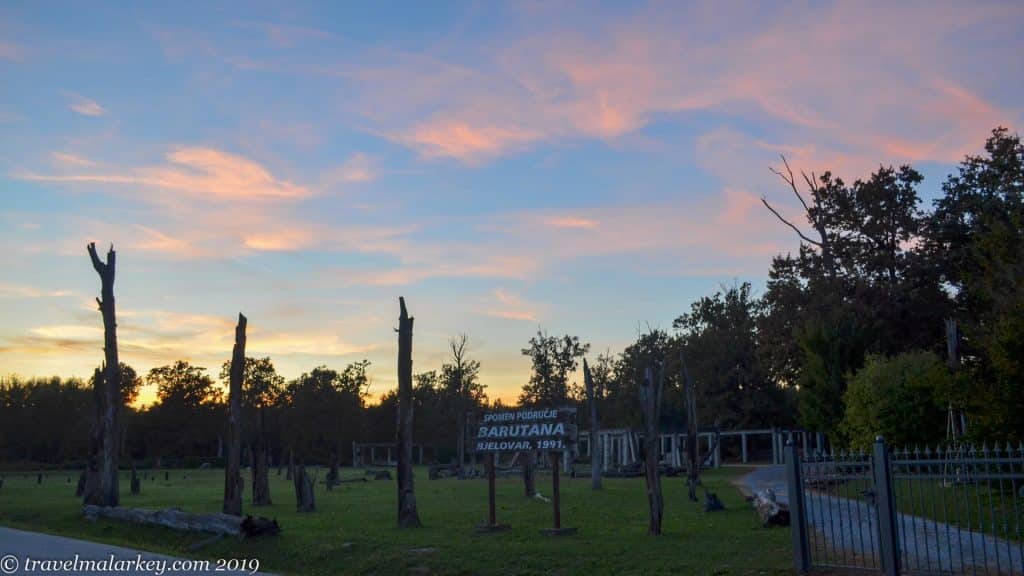 On Tuesday the 10th of September Iggy the Hymer motorhome took his own sweet time getting ready to leave the free motorhome stopover in Sevnica, and get on the road for Croatia. Though, in fairness to Iggy, our slow departure probably had a lot to do with our reluctance to leave at all. We had both really enjoyed our time here and weren’t inclined to leave Slovenia at all, never mind our little haven at Grad Sevnica.

Eventually though we could procrastinate no longer. The call of the road was, as ever, stronger in my bones than any pretty hamlet I’ve yet to meet. Croatia lay just an hour or so drive away. Country number seven and one I was having second thoughts about driving through.

We knew wild camping was banned in Croatia, and had heard many stories of people being fined even for leaving their vans in car parks for a few hours while seeing sights. While the legality of such fines is highly dubious I wasn’t keen on getting into an argument about it with a Croatian policeman. And we’ve never knowingly illegally parked anyway. We weren’t planning on starting now.

However the route through Croatia to Serbia was mostly drawing big blanks for places to stay. I’d looked on Park4night, I’d looked on CamperContact. I’d googled for campsites. Looked at a few Croatian campsite websites, searched on Google maps. But I was pretty much drawing a blank. Down along the Adriatic coast, yes, there were plenty. But in the north east area, running between Bosnia and Hungary, there was almost nothing.

The few places we could find were either ridiculously expensive for a spot to sleep in, or nowhere near either a route we wanted to take, or a town to visit. Just expensive parking in the countryside with all the facilities we already had on board.

We did find one place nearer the Serbian side of the country that looked good, but it was too far away for one day’s drive unless we took the toll road. And we really didn’t want to just zoom through the country in just one day.

So with nothing to be found we decided to just start driving and try and find a tavern on the way that would let us park up for the night in exchange for buying food or drinks. It should be easy enough to find somewhere. The world was full of bars looking for a little extra money through their tills. 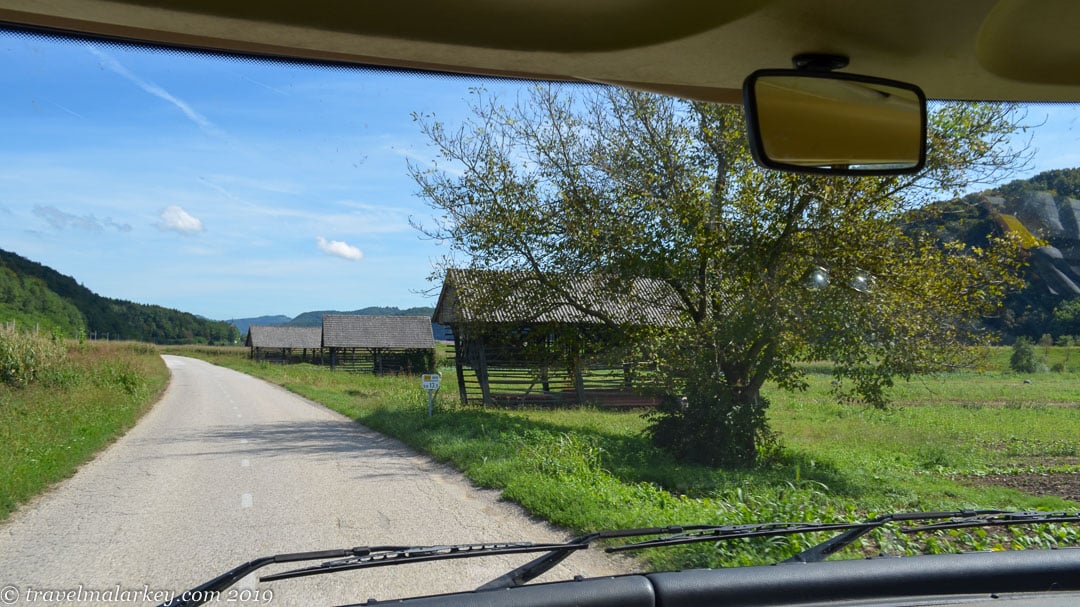 The traditional Slovenian barns are everywhere

So thinking we finally swung Iggy down the hill and out of Snevica. The drive to the border was through a lovely national park area, and the villages and barns and rolling hills seemed an epitome of prettiness as we passed through them and on our way.

Much too soon we came to the border. Croatia isn’t in the Schengen Zone so passports were actually required here. But there was nothing but a quick glance by the Border police and we were on our way.

At first the rolling countryside continued much the same on the Croatian side of the line as it had on The Slovenian one. We stopped to let Marley stretch her legs at a beauty spot by a gurgling little river. Butterflies and dragonflies danced around us and life seemed idyllic as we lingered just long enough to make coffee before getting back on the road. We had no destination in mind, but we wanted to get at least half way to tomorrow’s spot at Camp Borovik before we stopped. Off the toll roads that meant a full day’s drive. 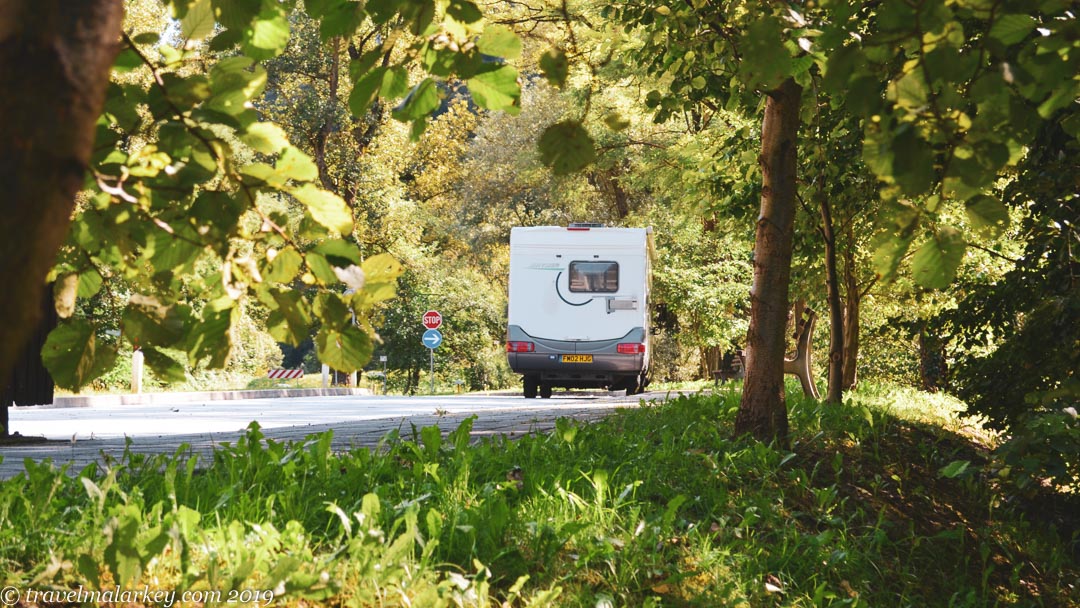 Iggy finds a perfect spot for a coffee break in Croatia

It wasn’t long before the rolling hills passed away behind us and the landscape flattened out. We were back in the plains again. Field after field of grain crops, and straight lined Croatian villages, began to fill the world around us as the hours passed and Iggy’s wheels turned, and turned some more. 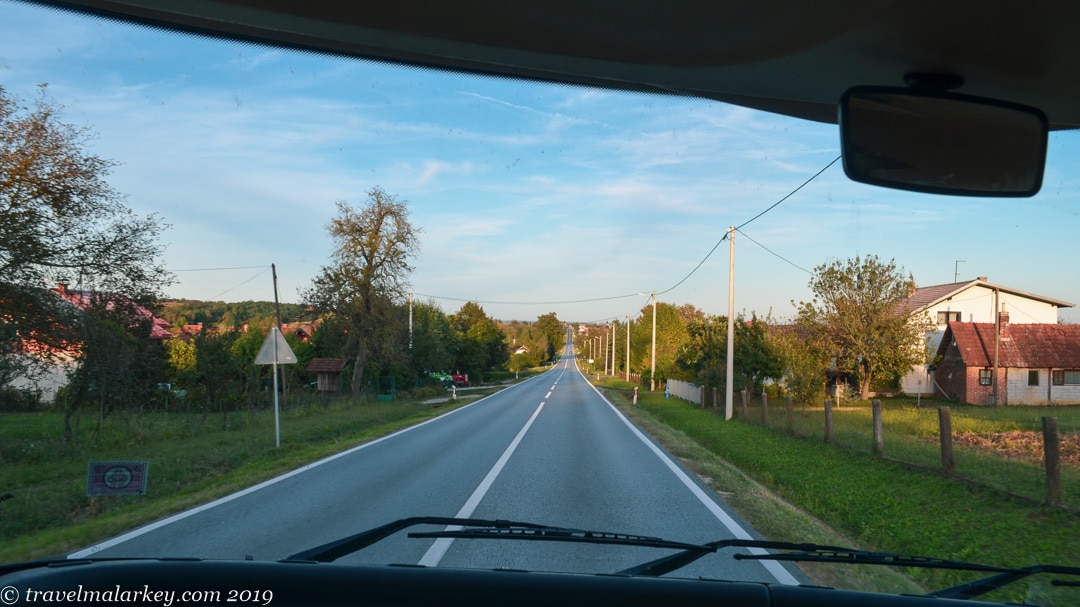 Straight lines of villages parade either side of  the road.

We passed through a few utilitarian looking towns, not seeing anywhere at all that took our fancy as somewhere to try and stop. The sun was getting lower in the sky and we needed to get a move on with finding somewhere when we passed what looked to be ruins of some sort just outside Bjelovar. But as we turned back for a second look we realised it looked more bombed out than old.

It was a strange place to wander around. A memorial site from the Yugoslav Wars, and, to me at least, the strangest war memorial I have seen to date. According to a Croatian wiki  article (perhaps a little biased, but interesting reading) Serbian forces were located in a barracks here and were planning on attacking Bjelovar. The Croatian forces attacked and won, and left this battlefield of stricken trees and ruined buildings as a memorial for the Croatian soldiers who died in the battle. 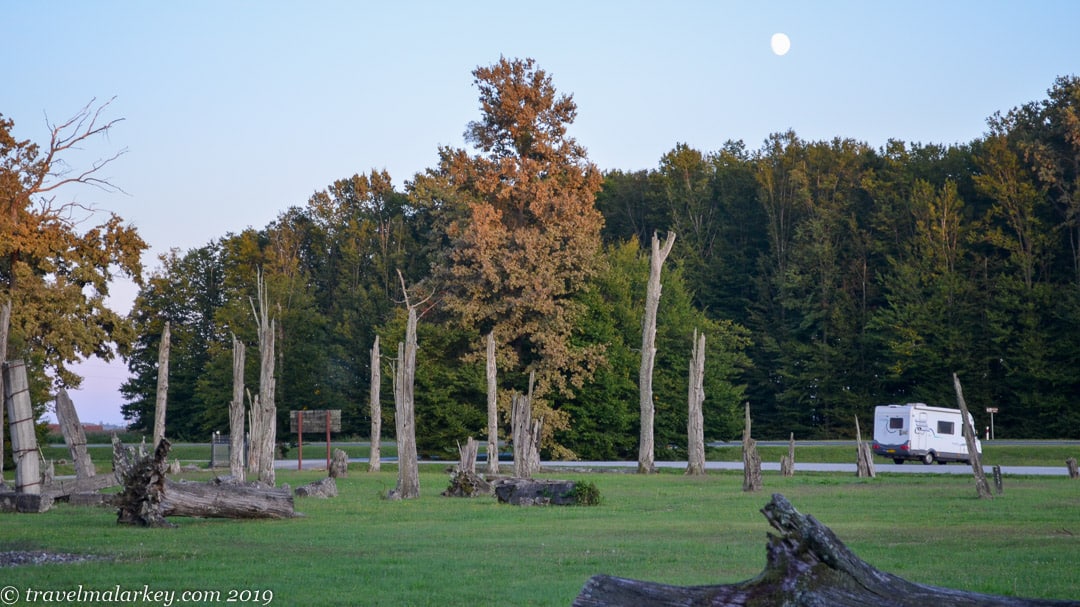 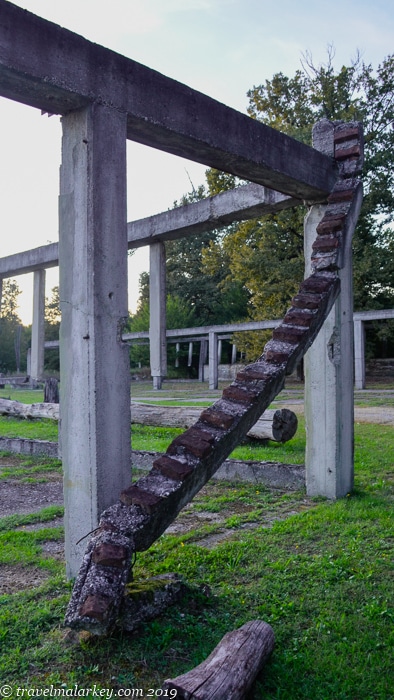 It is a better way perhaps to show young men the realities of war, than magnificent monuments. Though there are monuments to the dead here too. The splintered remains of the trees said more of wanton destruction to me than the blasted buildings, and flower be-decked crosses. A few mad men become obsessed with taking what they do not need. And everything is destroyed in their path. Even the very land and resources that they covet.

We left the eerie place as the sun sank beneath the horizon, and drove on into darkness still trying to find a place to stop for the night. It had been a long day, we were tired and getting nippy. We really needed to find somewhere soon, and I was searching google as well as the road when I saw a sign saying parking for trucks and cars. 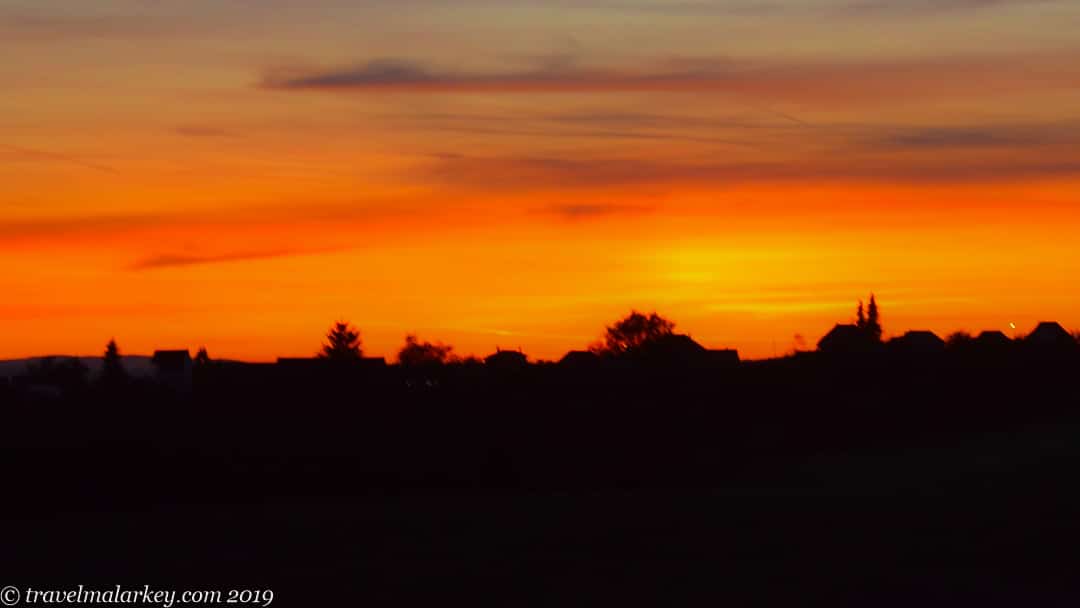 This Croatian sunset definitely had that wow factor

“There!” I pointed as a roadside hotel swung momentarily into view. Jay barely had time to see it as it appeared out of the trees. But still he just managed to slow enough to swing Iggy into the car park before we shot past. Now to find out if they would let us stay the night in return for buying a meal or some drinks. And also if they took cards because we had no Croatian cash at all. 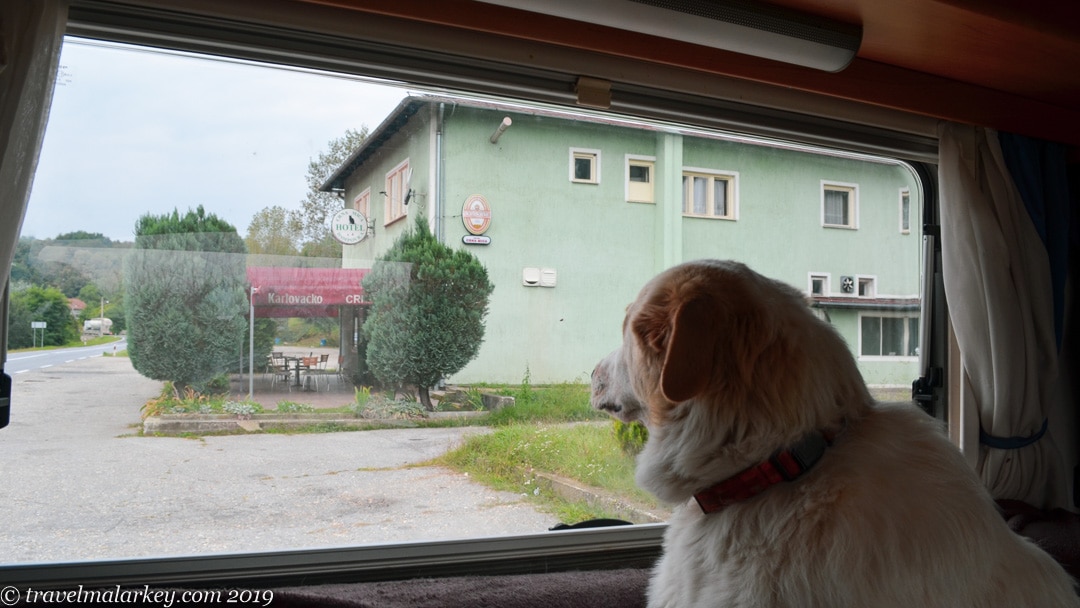 The hotel in the morning once there was light to see it.

“There!” I pointed as a roadside hotel swung momentarily into view. Jay barely had time to see it as it appeared out of the trees. But still he just managed to slow enough to swing Iggy into the car park before we shot past. Now to find out if they would let us stay the night in return for buying a meal or some drinks. And also if they took cards because we had no Croatian cash at all.

There was a woman serving in the bar and half a dozen eastern european truck drivers. She spoke no English, the truck drivers had a few words between them. Our Croatian was limited to Yes, No and Thanks.

Still it’s amazing what can be done with body language, facial expressions, and Yes, No and Thank You.

First the woman “said” we would have to pay for a room in the hotel.

No, says I, we want to sleep in the van, but we will drink.

Okay says the woman, you can stay in the van and drink.

But then came the matter of the money. They did not take cards. A bit strange I thought, for a roadside hotel to not take cards, but such is Croatia I guess. They also would not take Euros so that left us needing to find a bank machine.

The truck driver said it was twenty minutes to the nearest ATM. Google maps told me it was 6 minutes each way. The woman said it’s okay, never mind, just stay anyway and have a drink.

Staggered by this hospitality. That she would let us stay, and give us a free drink to boot, we set off to the nearest bank machine, and were back in twenty minutes with some cash. Everyone laughed and cheered as we walked triumphantly back through the door, waving money in the air like lottery winners.

Beer and wine were ordered and drunk, three times over, while we chatted and laughed using facebook photos and good old google translate.

The Hotel bar was open till midnight, but the alcohol seemed very potent there, and after three drinks we felt we had paid our dues and teetered, definitely worse for the wear, back to Iggy.

It had been a long hard day, in a landscape that had rewarded us little for our effort to see it. But the hospitality of strangers is a wonderful thing. And so it was that we were feeling a little more inclined to like Croatia than we had before, as we fell into bed and to sleep. And  to sleep some more. 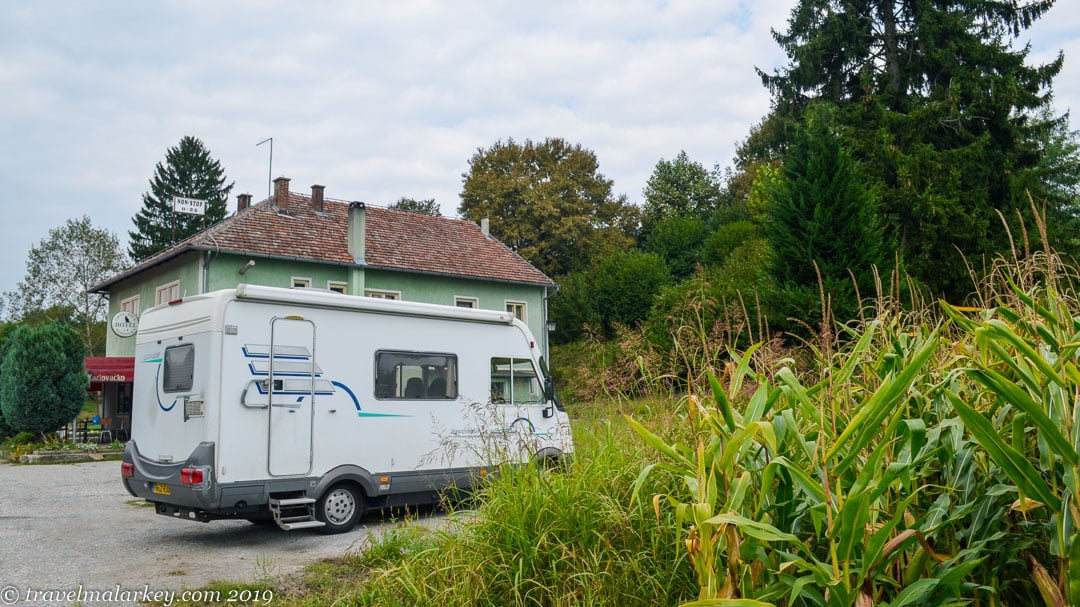