For Auld Acquaintance & Finally the Ferry 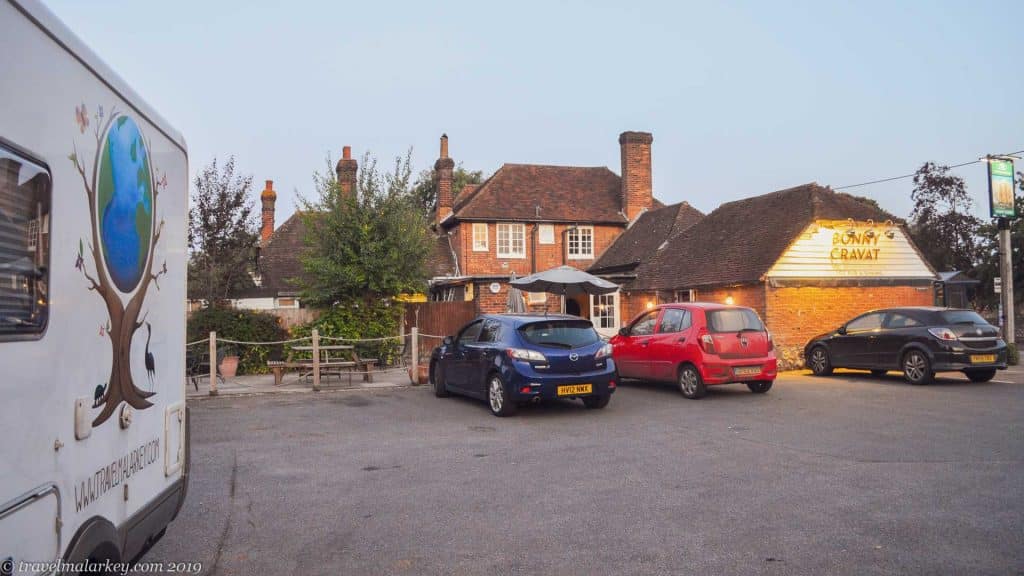 Yggdrasil the Hymer motorhome begins today, as he ended yesterday. In the familiar and welcoming space of the Cite Europe motorhome parking in Calais. (50.932598,1.811900 ).  The ferry has been caught, the channel has been crossed, and we are resting, briefly, in France. 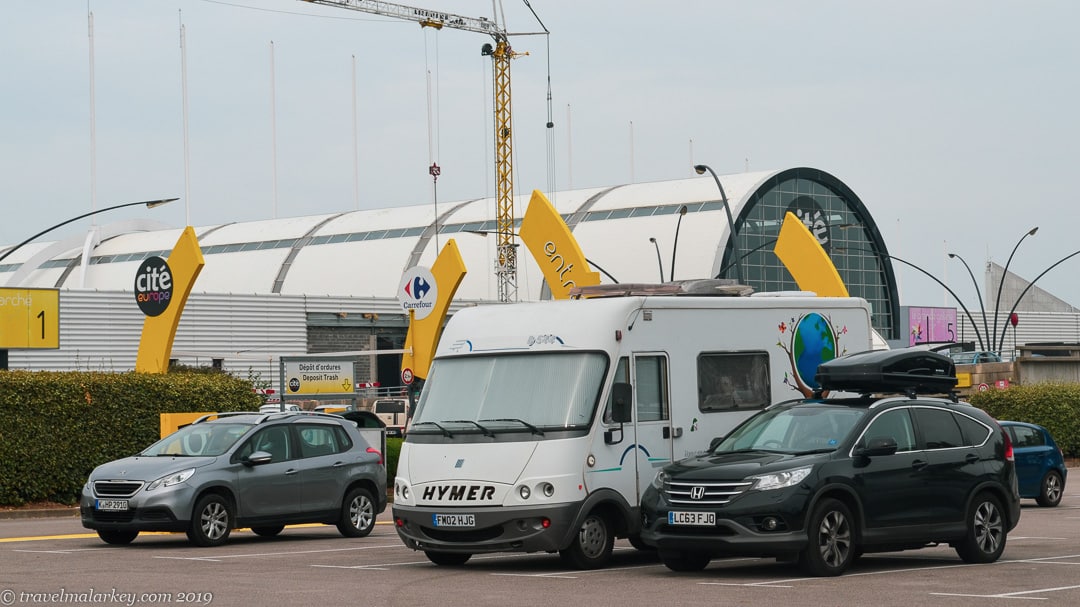 It’s been a busy old time for Yggdrasil these last two days. First of course was where we left you last post. Down in East Sussex with artist Luke Brabants getting his Tree of Life painting on his side.

But this was just the start of Iggy’s tree. The next step was going to happen the very next day when we met up with an old school friend of mine who happens to live in Kent. 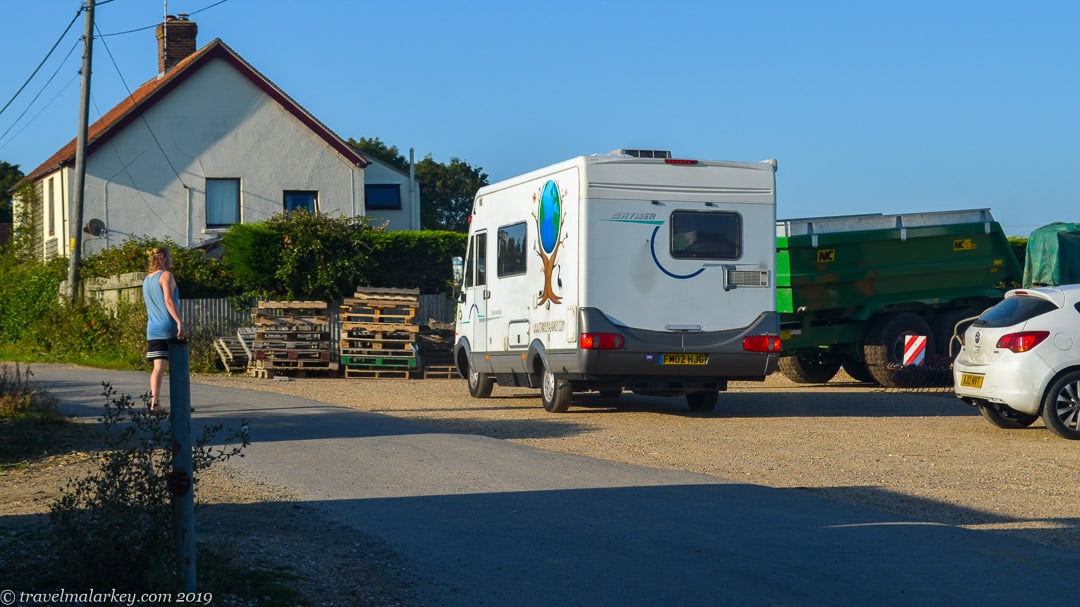 Ideally we would just have stayed at Sylvia’s, but Yggdrasil is a bit too big for her driveway. Plus which she had only just returned from holiday, and we were shattered! The best plan for tonight would be to find a likely looking place to stop where she could come and meet us tomorrow. 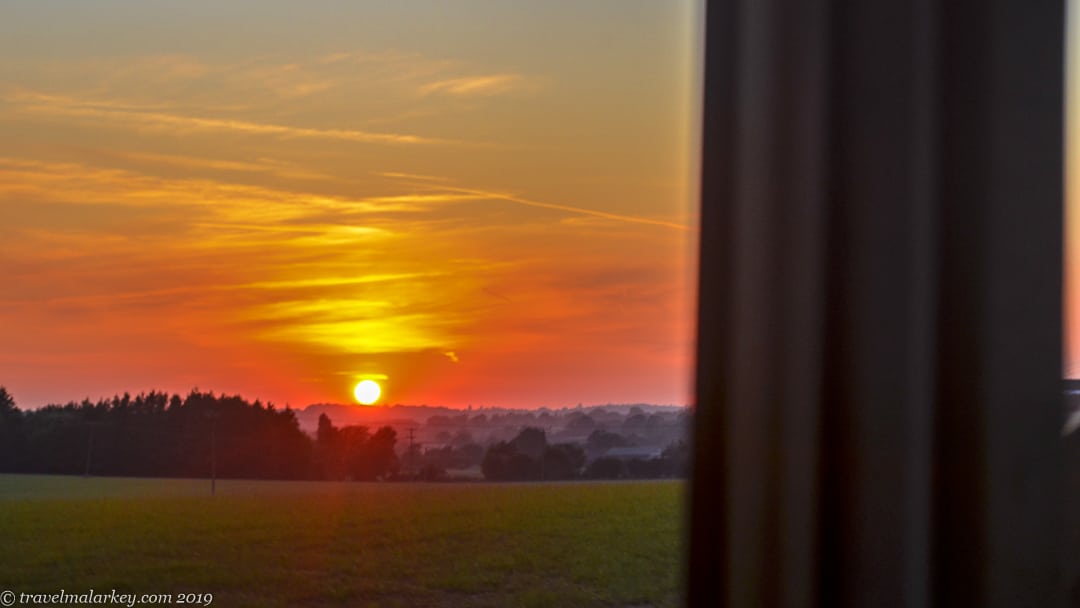 The only shot I could catch of the sunset. Beautiful!

I was sick when the day started. And I was even sicker now after hours of heat, filming, excitement… As soon as we left Luke’s the tiredness swamped me completely. And that is never a good state to be trying to navigate around in a 3.5 tonne motorhome.

As an incredible sunset flooded the sky around us I frantically searched on the maps and apps trying to find a good spot. But I just couldn’t seem to find anywhere. Three times I picked somewhere only to have Jay take a wrong turn and twist us deeper and deeper into the lanes. Or to find out that the pub we were heading for was closed for the bank holiday.

It was getting late and I was getting more and more stressed. Jay pulled over at an electrical substation to let me look at the maps while we weren’t constantly changing directions. And to pull myself together. Tired and sick I was on the brink of tears and tantrums. 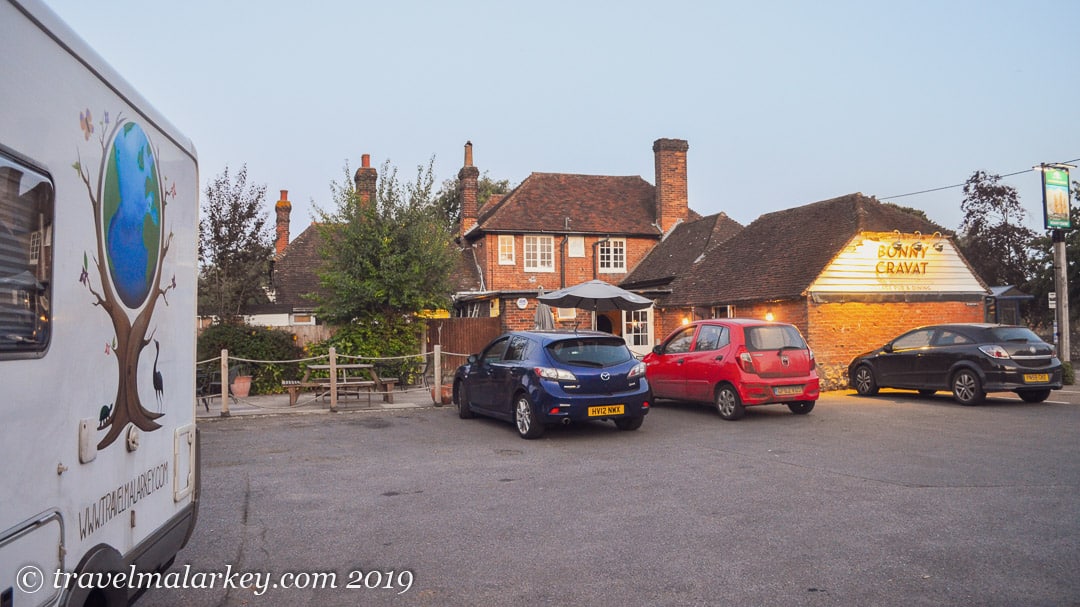 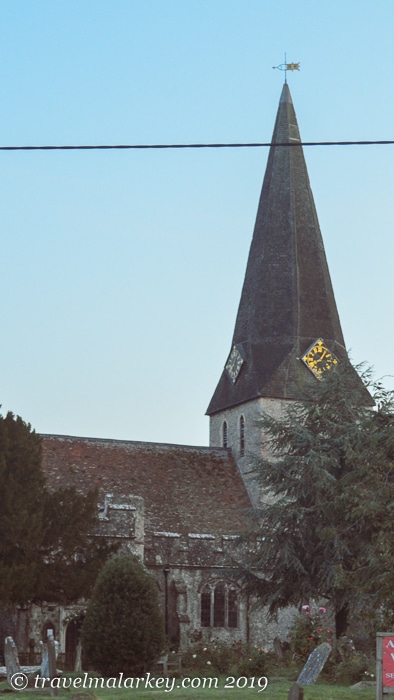 Pulling over worked wonders on my frayed nerves and I quickly found us another spot, and told Jay if we saw a likely looking pub on the way there to pull in. And the motorhome fairies must have been listening because five minutes later and we passed a pub with car park spaces in the tiny village of Woodchurch.

The Landlord of the Bonny Cravat is, as it happens, thinking about setting up a small motorhome stopover in his back field, and welcomed us with open arms.

Such is the way of the nomadic life. One moment all is tiredness and just too much. And then, from nowhere, the kindness of strangers wraps you in warmth, safety, good food, tales and laughter.

They were a lovely bunch at the pub. Before we knew it the night had passed and Sylvia was pulling into the car park for lunch and a catch up.

I’ve known Sylvia since we met at school when we were fourteen. She’s one of the people on my “favourite people in the world” list. Or she would be, if I had those kind of lists.

It doesn’t matter how long it’s been since we’ve seen each other. It’s like it’s been five minutes. Like one of us just stepped out of the room and the chat just picks up where we left off.

So this will be a short post, because the main thing that happened that day was Sylvia and I did an awful lot of talking. But, eventually, the sun began to drop in the sky and we turned to the van. 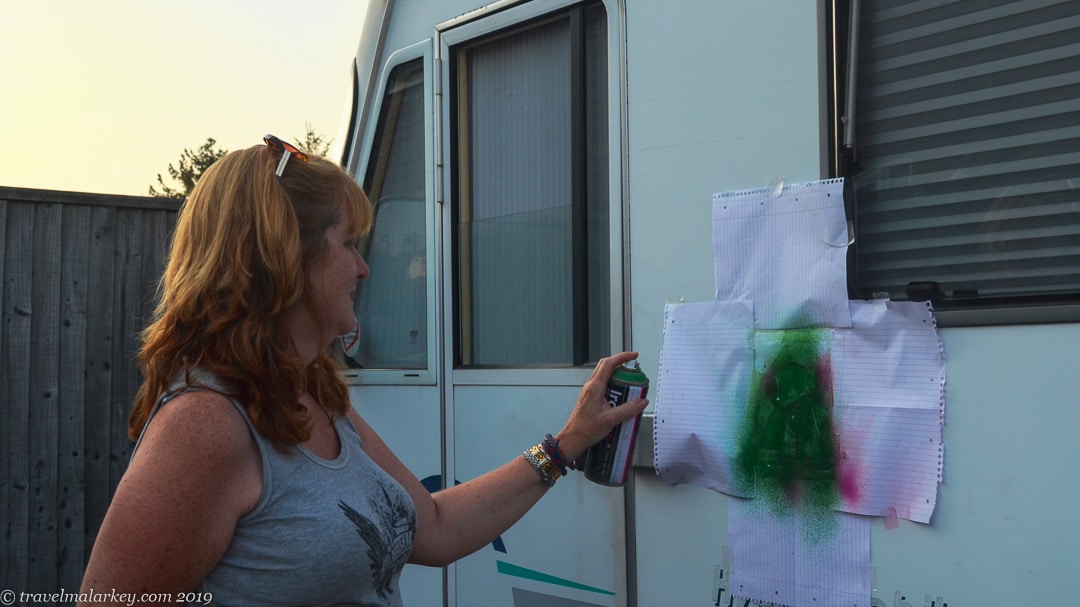 Sylvia sprays paint on my van like a Graffiti master

I had, of course, asked Sylvia if she would add to my tree, and she had come prepared with a stencil to spray on her design. Even better her son David had made the actual stencil. So both of them would be part of this first leaf on our tree. They worked out the design idea between them. David drew it and worked it out as a stencil. And finally Sylvia would paint it on the van.

None of us had ever done this before, so we were all just a tiny bit terrified! Especially Jay, who – until this very moment – hadn’t really thought about all the things that could go wrong.

Sylvia and I were a bit more nonchalant, in that way of old friends used to getting into scrapes together – and getting back out again too. We were more worried that we might mess up David’s stencil after all his hard work. Now that would be a disaster. 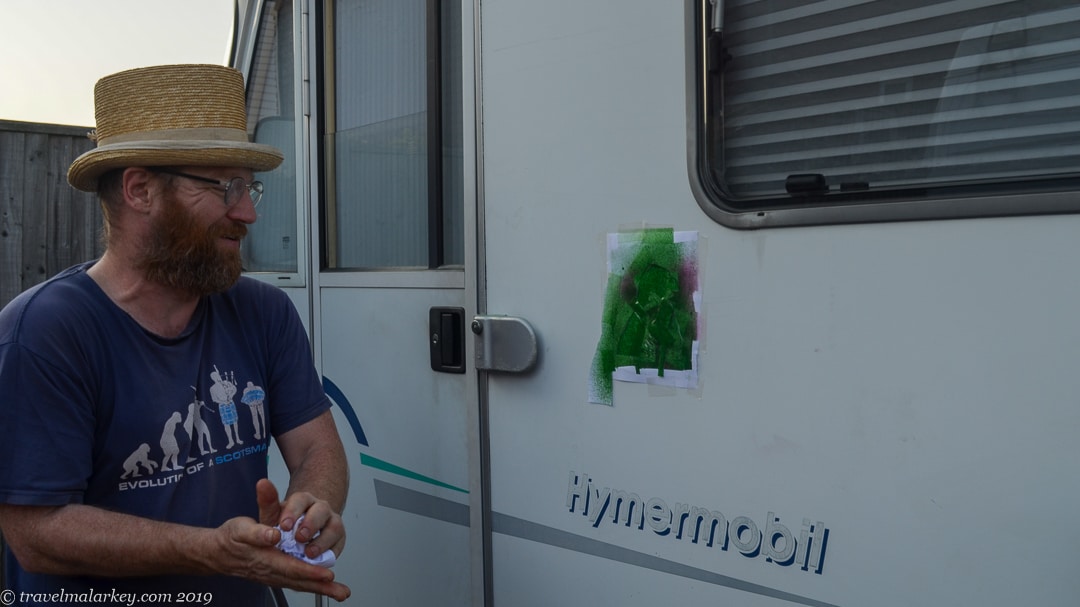 Jay takes the masking paper off for the big reveal

After a lot of fiddling with paper and tape. And some very careful paint spraying from Sylvia. It was time to find out if it had worked. We all held our breath as Jay stripped off the masking paper, and finally pulled back the stencil to reveal Sylvia and David’s handiwork. 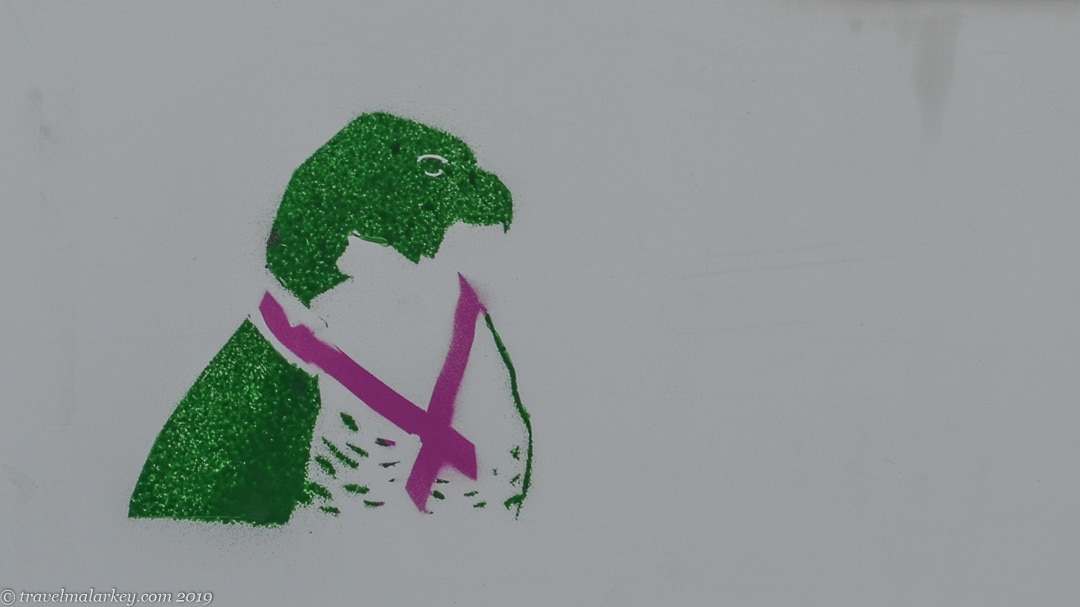 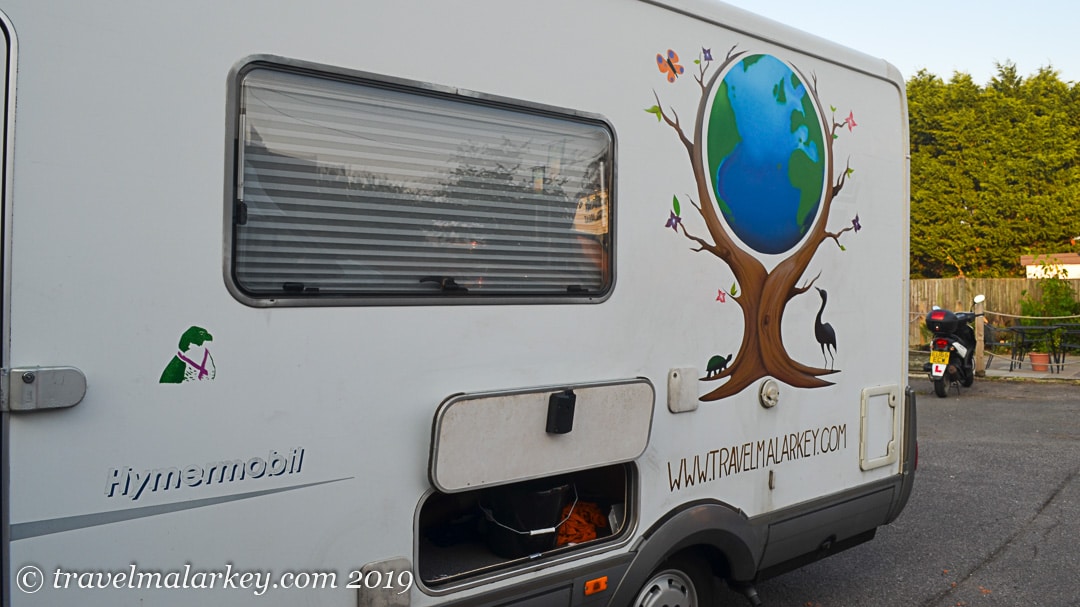 We just couldn’t get over how perfect it looked. Good job David!

Sylvia is an avid bird photographer and David had drawn a Falcon – her favourite bird. At Sylvia’s request he had also included a Breast Cancer Ribbon.  It’s a perfect combination for Sylvia, for both of them maybe. Sylvia is currently clear of cancer after being diagnosed just a few years ago.

It’s been a difficult journey for both of them, and I can’t begin to pretend to know what that means, or how it feels or affects them. I realise now, which I didn’t know, that even if you get better, it remains with you. A hanging threat, the unwelcome house guest who may turn up, unexpectedly, at anytime, and you never know if they’ll leave.

I’m so happy that she and David are the first new leaves on Our Tree. 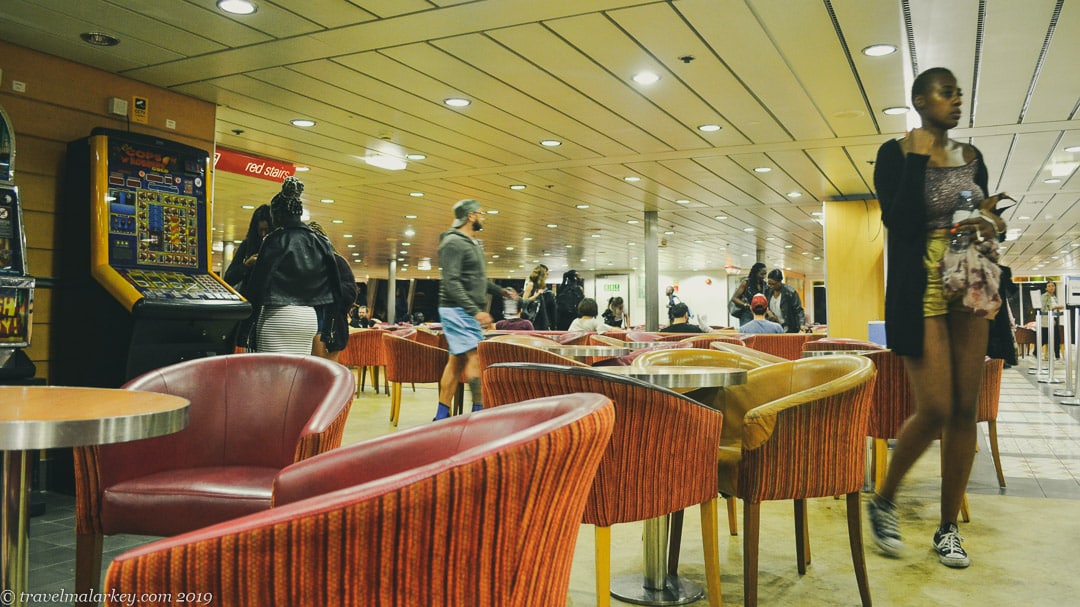 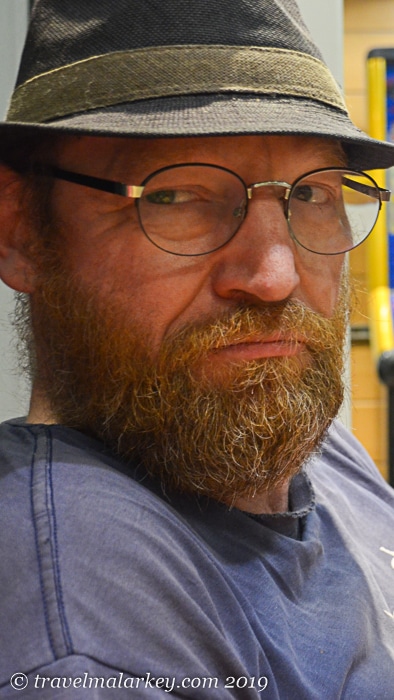 And then David texted to say he was on his way home from his friend’s. The day was over. It was time to say goodbye. Hugs that were too short. Farewells that would always be better not to happen. And Sylvia was gone, and so were we.

An hour’s drive to Dover on quiet roads and we parked down by the shore for two hours until it was time to check in for our ferry.

Somehow it had all come too soon, and we weren’t prepared to be heading overseas. Passports were dug out in a fluster as Border Control at the ferry port waited patiently. Everything was swift, done, dusted, and we were on board for the hour and a half trip to Calais.

I amused myself as always with pointing the camera at everything that moved. And, mostly, at Jay. He shook his head at me and, also as always,  put up with it.

And then, before you knew it, we were in France. Yggdrasil rolling into the free motorhome parking at Cite Europe. Marley gulping in the different tasting French air. And then nothing but three sets of quiet breathing as we all went softly to sleep.

p.s. this is the charity that Sylvia’s sister fund raises for… Breast Cancer Now