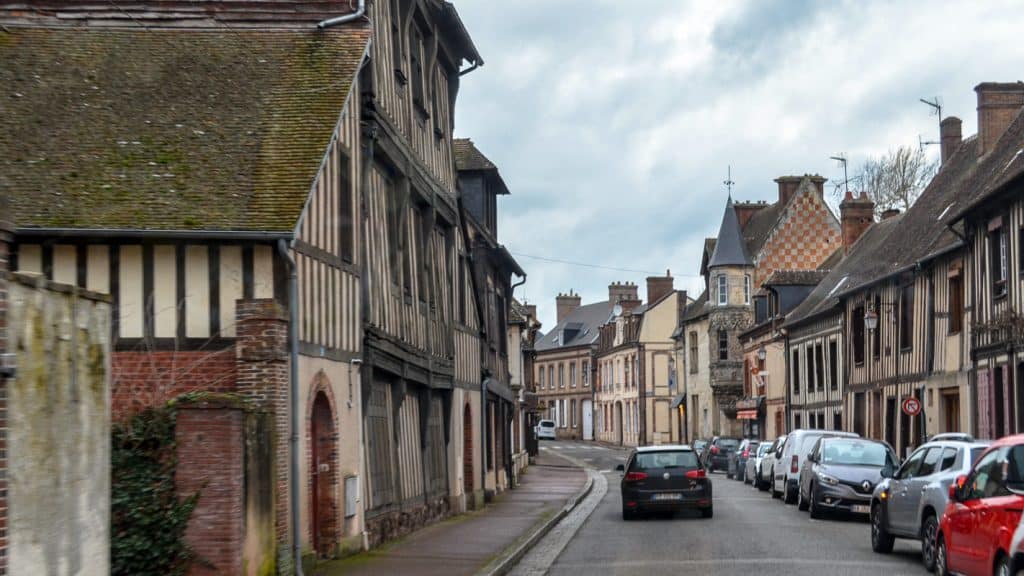 It is, without a doubt, one of my most favourite things in the world.  Ever.  The closing stages of a voyage.  Standing on a darkened boat deck, the first pale glimmers of a new day flickering in the East.  And the new land swimming into focus at the far reach of the waves.

And it was just so that we arrived in Calais, tired, worn and exhilarated beyond words as we clattered down to the car deck with the long distance truckers.  This was it!  The dream was truly, fully, made true, as Iggy rumbled down the ramp and onto the beautiful, entrancing, oh so chic land, that is France.

It was a beautiful moment indeed.  Or would have been if I wasn’t frantically scrabbling at the Satnav and my mobile phone trying to get the coordinates for the motorhome stopover where we’d planned on getting a few hours shut eye!

Still, at least it made for a memorable arrival! Jay constantly squealing “What way!  What way!” as he steered our diminutive three and a half tonne motorhome between the towering juggernauts thundering for the autoroute; my phone shutting down unexpectedly as I tried to turn roaming back on; and our TomTom Satnav willfully refusing to be able to connect to the satellite, just because it had spent an hour and a half in the bowels of a huge metal ferry.

Are we having fun yet?

Time, as it always does in these scenarios, froze in place, as the dock roads slipped past and a decision making junction arrived.

I screamed as calmly as possible,

“Take the road for Calais!”

“What?” Jay screamed back lovingly, “The trucks are all going that way!!”

Decision made and turning taken, time slipped smoothly back into place as if it had never stopped.  The co-ordinates for the motorhome stopover flicked lazily into place on my phone screen. Satnav and the satellite clicked back into seamless connectivity, and we found ourselves on a fifteen minute detour, through the sleeping streets of Calais town centre, on our way to the Cite Europe Hypermarket – who so kindly allow motorhomes to stop over in one of their car parks. 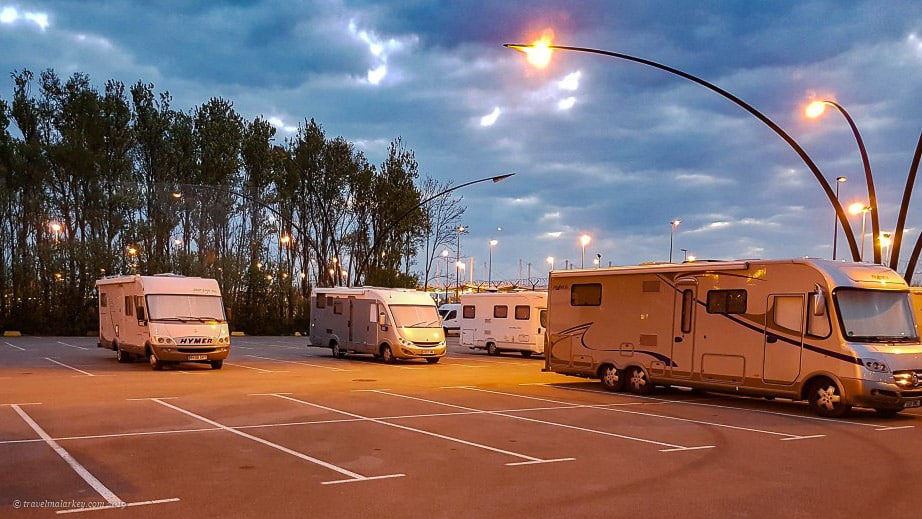 And it truly was bliss to see, for our very first time, that universal European sign of welcome,  a little blue sign with a motorhome on it to indicate we could stay here.  Come on in weary travellers!  It’s good to see you!  Or as they say in France – Bienvenue! (N. 50.93259, E1.8119)

After only a few nights “wild camping” in the UK it was such a delight to know this spot was for us.  To glide Iggy in among the other vans and feel, for the first time, that sense of community and belonging.

Needless to say, gas on, shutters shut, bed down…and we slept like babies.

How good did we feel when we woke up a few hours later?  That moment of confusion – where where we?  Iggy.  We were in Iggy.

Where was Iggy…??  France!  Calais!  Outside a giant Carrefour!!  Pastries and French coffee for breakfast!!

We fell out of bed and through the doors of the hypermarket faster than the Cheshire Cat’s vanishing grin.  Buying a water hose was our main excuse for shopping as we still didn’t have one.  But really we just wanted to “Ooh!” and “Ah!” at all the goodies in the French supermarket.  Marvelously cheap red wine and a packet of Apericube were at the top of my list.  Jay just wanted beer, cake and chocolate.  Jay always just wants beer, cake and chocolate.  He’s a man of simple needs is our Jay.

Two hours later we re-emerged from Carrefour with the slightly crazed expressions of the over shopped and  a trolley full of serious goodies to cram into Iggy’s creaking cupboards.  We’d even got the hose!  And so it was with a justifiable sense of success and good humour, that we eased Iggy away from his first French Aire and happily headed South.

We had 9 days to get to Portugal and the world was looking pretty wonderful.  So much time!  So much freedom!  We drove for an hour or so and then pulled in to put the kettle on.  Just because we could.  No expensive services needed for us!  We were like the proverbial kids in a sweety shop, doing all these things for the first time.  The sky was grey, but we didn’t care.  Our joy seemed un-dimmable!  Ah what surprises Fate has in store for us all!

First day abroad in Iggy the Hymer Motorhome. The joy of being able to stop just about anywhere and pop the kettle on!

Break time over we got back on the road for the last hour’s drive to Rouen.  I’d found an Aire there where we planned to stop for the night.  We were taking it easy on the driving, planning on an average of two or three hours per day and looking forward to staying in as many different places as possible.

I popped “Rouen” into Google and was exclaiming to Jay about the prettiness of every passing house and tree when…
Suddenly the loudest, strangest… sort of an implosion… sort of a sound…WHOOMPHED all the way through Iggy!
What on earth!!  The engine noise was suddenly enormously loud.  The “sound” had seemed to come from the engine, under the dash.  It was definitely heard, but also, strangely, felt.  Like an implosion rather than an explosion.  Neither of us had the foggiest idea of what it was, or of what we should do.  Everything was still working.  Nothing seemed wrong apart from the really loud engine noise.  That seemed wrong.  Pretty wrong indeed!

I think it’s fair to say we panicked a little then!  What if it was something crazy that would destroy the engine if we kept driving?  Our very first day!!  We had been so happy!

The little village we were driving through was closed for Monday, so we pulled up in the bus station/car park, opposite the thankfully interesting, village church, and decided to call our Breakdown service.

We just couldn’t believe it! Five days after we got Iggy we’d had an Insurance claim because of the “Incident of the Broken Bumper”.  Now on our very first day in France we hadn’t even reached our first night’s destination without having to use our Breakdown cover!  Thank goodness it was all included with our Safeguard Motorhome Insurance!

We took a moment to feel awfully upset, disappointed and worried… …And very quickly found that not only did that not help in the slightest – but if anything it made matters far, far worse.

So we decided to “make the best of it” instead.  Doing silly, sad face photos, was a great help in making us laugh, and after that the time passed quite quickly as we had a wee wander around the outside of the “Thankfully Interesting Church” until the breakdown truck arrived. 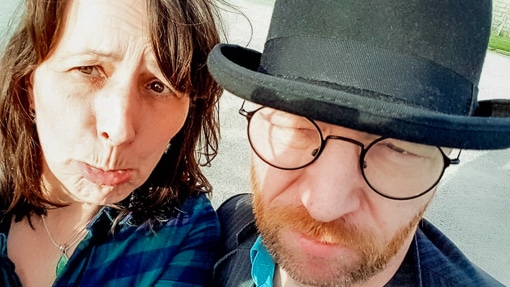 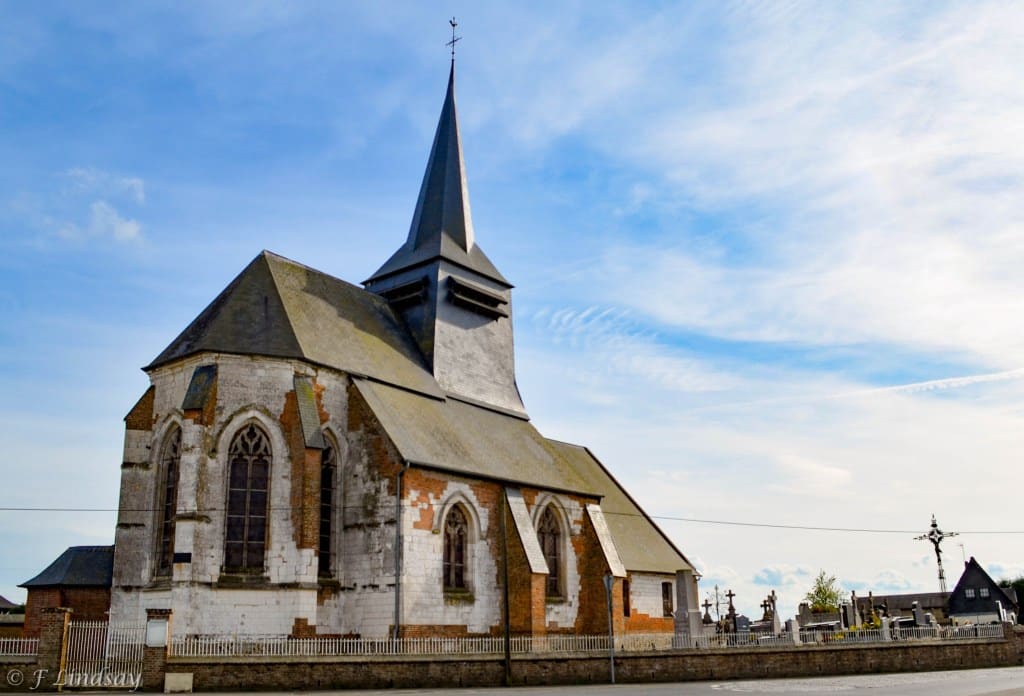 We watched Iggy being winched onto the impossibly small truck with our hearts very firmly choking the life out of us in our throats!  – Was this safe!  Ho hum!  Life is an adventure.  Tra La La.  Gulp!! – And then climbed up into the truck with the lovely and completely non-English speaking driver..

Spirits happier now we were off the roadside and had a mechanic lined up for the morning we set off to explore Oisemont.  We’d come looking for adventure and adventure was just what we were getting!  And I for one, Jay for two, and DM for a definite three were all for embracing it.

Still, try as we might to find positive delights, Oisemont is just not a town designed for the random evening visitor.  To call it one horse is a bit of an exaggeration in the horse department.  There were a few pretty buildings in the old town centre and old, closed down industrial buildings, that spoke of work that had left and gone elsewhere, as “progress” marched inexorably through the small towns and villages of Europe.

We spent a couple of hours wandering the almost deserted streets and then made our way back to Iggy for a glass of Carrefour’s finest and a DVD before bed. 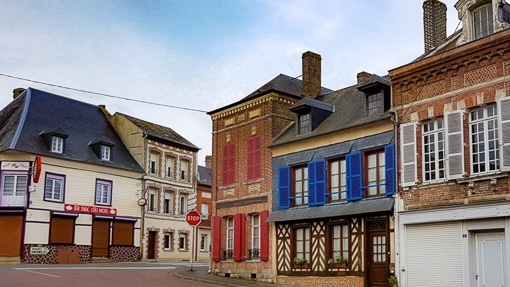 But hang on a minute!  What was this?

Earlier on I’d done a shout out on the Hymer Owners Group on Facebook, to see if anyone had an idea what might have caused this strange noise.  One of the group members had got back saying she thought she had experienced the very same thing.  The noise I had so badly described sounded exactly like what had happened to them.  Best of all, if it was, then it was simply a hose breaking free from it’s clip. An easy fix!

Bonnet up, and torch in hand, we had a quick look at the spot described, and sure enough!  There was the errant hose!  Popped it’s clip and flopping shame-facedly in all the wrong places.  A look in the manual and we could clearly see the place it should have been connected to!

With happy grins we went back into Iggy, drew the shutters and poured a glass of red.  All being well the morning would see a new clip fitted, and we would be back on our way.  There were many more corners waiting to be turned.  And all the things we would find waiting on the way…