Iggy the Hymer Blows A Fuse – An Auto Electrics Saga 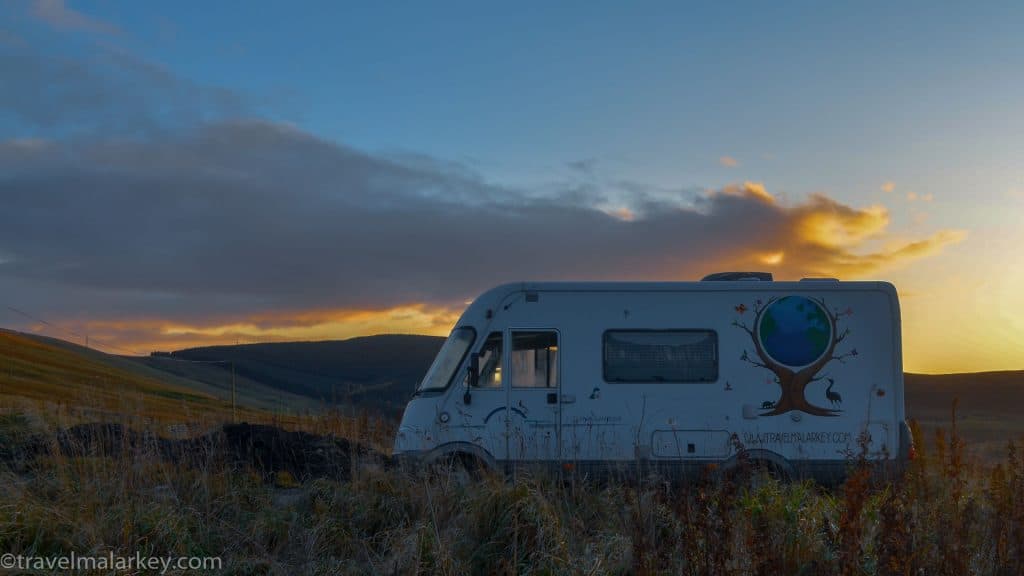 The day is Friday the 15th of November, and I’m sitting typing at the viewing window in Stainless Creations, Falkirk, Scotland. Stainless Creations, as some of you may remember, is the workshop we found to make us a brand new, custom, stainless steel exhaust for Iggy, back in August. We were so impressed with the place that we decided we were going to make them our new designated workshop for all things mechanical.

And, as it so happens, all things auto electrical too. Iggy was already fourteen, going on fifteen when we bought him back in February 2017. He’s mostly been a great van and, in the 939 days since we went fulltime, he has trundled us 35,734 miles, through 19 countries. Okay there was the time the fuel pump died outside a fortress in Serbia. And the time Jay squashed the exhaust flat trying to avoid a low bridge in France. Oh and the hose coming loose, that had us in a total newbie panic, on our very first day of our inaugral European Tour. And let’s not forget that time we broke the bumper five days after we bought him!

But apart from these, mostly self inflicted issues, Iggy is, by and large, a great van. Apart from the electrics. Oh how we’ve come to love those electrics. Said Fi and Jay together. In their most perfectly sarcastic voices ever.

Iggy’s electrics have been our one, recurring, little bug bear of a problem ever since we got him. The repetitive blinking of an engine fault light, dropping us to a gruellingly hazardous “Go slow mode” which, after an unexpected five days in a hotel in Pamplona, and numerous mechanics later, was eventually “fixed” by an auto electrician shaking our wiring loom!

Then there was the driver’s headlamp blowing three times in twelve months until our last mechanic tweaked the wiring. Followed, after a trouble free year, by the other headlamp blowing twice in the last six months.

Small problems. Fairly insignificant. But, like a disease free mosquito, buzzing you awake ten nights in a row, from somewhere in the vicinity of your left ear…Increasingly annoying with the passage of time. 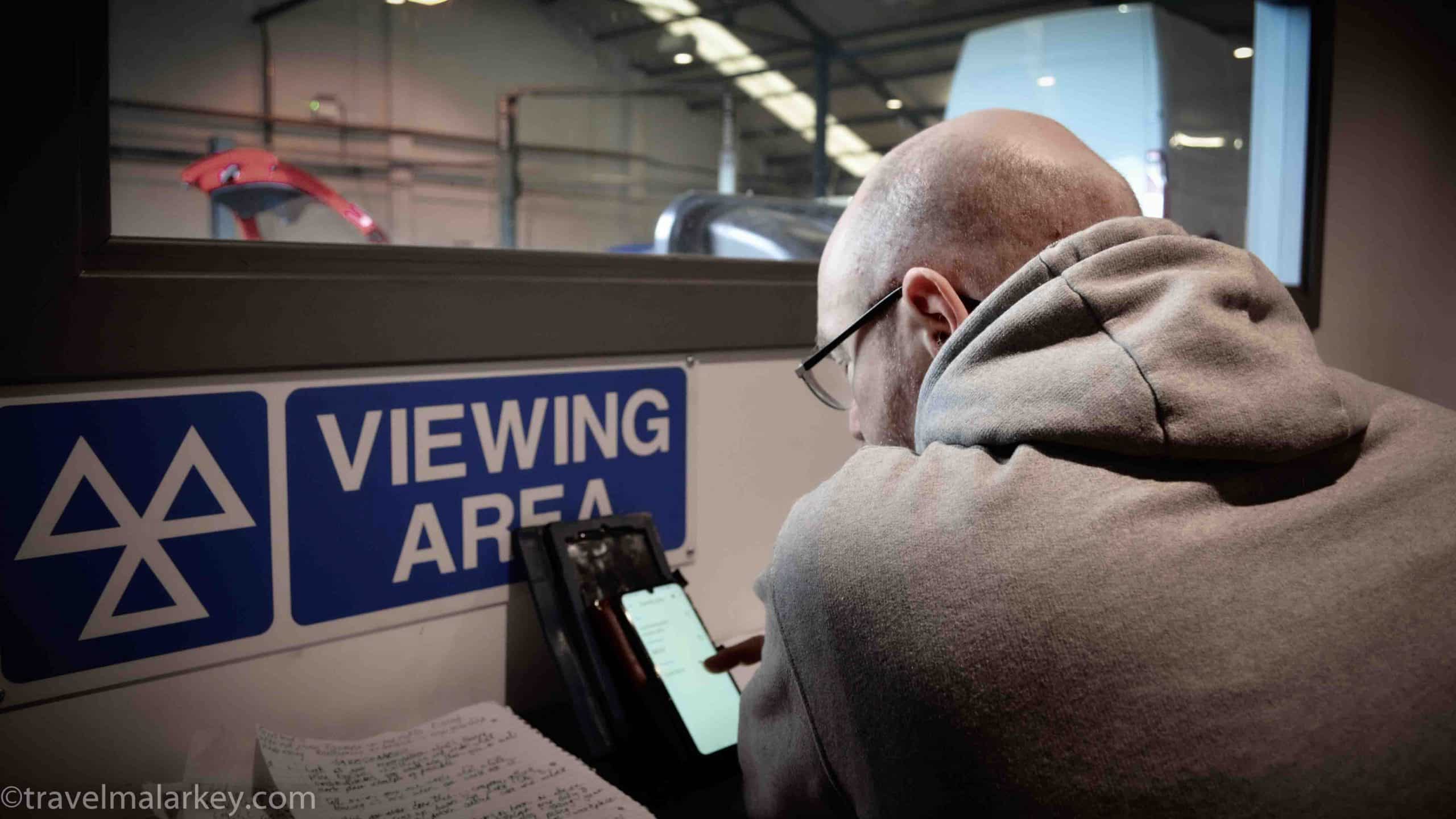 Jay works on an essay while Iggy gets his electrics checked

And so it was, that when this last bulb blew, the electrics issue most definitely moved itself up from the to do list titled “Think About It Whenever Something Goes Wrong”, and was now firmly settled in the higher placed list “Get Round To That As Soon As Nothing More Important Is Happening”.

This list has quite a few Iggy items on it, from my much wished for SOG unit, to new curtains and a new skylight for the kitchen. Every now and then we even manage to find the time and money to tick off an item or two. But more often, we find things on this list have a habit of jumping the queue, and moving themselves up to the top list titled “You Have To Fix Me Now Or You Can’t Drive Anymore.”

And, just exactly like that annoying night time mosquito does, our electrics issue decided it wasn’t messing about any longer. No amount of DEET, fly swats, or citronella candles was going to get in it’s way again. Gentle, persistent buzzing was just not doing the job here, and it was time to go in for the kill.

Or in the case of “Iggy and the Annoying Electrics” it was time to blow the cab heater. Or, to be more exact, incinerate the heater fuse, encrusting the blackened remnants of metal and plastic firmly into the fuse box connectors, and immediately try and also incinerate any attempts at replacements.

And, naturally, this had to be done on the first, frosty as a snowman, puddles iced so thick Marley could skate on them, minus three degrees centigrade, freezing fog, six a.m. start in total blackness, of this year’s delightful Scottish winter.

The two hour drive that followed was a true gift of an experience. One of those “memory days”. The ones we laugh about with friends over a glass or two of wine. Usually somewhere nice and sunny. Sitting outside with t-shirts on in January, and Jay says

“Do you remember that time the heater went? When it was absolutely freezing? And we had to tie three cloths to the broom handle to keep wiping the windscreen clear enough to see? And even so we had to pull into every second parking spot to scrape the inside clear when our breathe started icing over?”

If our attention seeking electrical system thought it could jump to the top list, by such transparently silly tomfoolery…Then it was, absolutely, one hundred and twenty seven percent, correct. 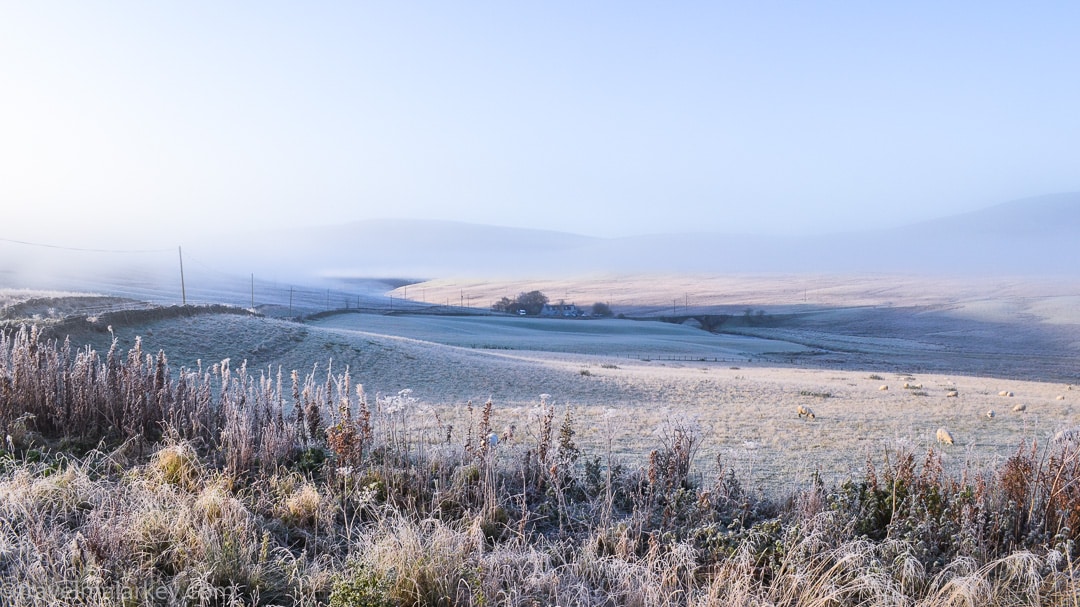 It was a beautiful morning…once we could see it

And so, today has been largely spent sitting in the “Viewing Room” at Stainless Creations in Falkirk. Iggy’s wiring has been given a good once over by the fantastic crew here, and the main diagnosis is…

Now if this was social media that last comment would have been followed by at least half a dozen lines of laughing emojis. But as this is a grown up, I’m a proper writer, website article, blog post thingummy of a jig, we don’t do those emoji type things here. No siree.

We did however all do quite a lot of real laughs in the workshop over the slightly less than formidable connections in the standard Fiat fuse box. Which, as we’ve noticed, are prone to a little bit of temperamental behaviour when you spend a lot of time rattling around pot holed back roads in Greece, Portugal, Sicily, Romania – and pretty much any road in Belgium or the UK come to think about it.

Thankfully laughing about our Fiat fuse box was not all the boys at Stainless Creations had been doing with their time. In fact, in between bringing us cups of tea, and watching Jay playing Skyrim in their reception, they’d been pretty darned busy on our behalf.

The overheating heater had been thoroughly checked over for faults which, as expected, it didn’t have. The wobbly connections which had led to the overheating had all been thoroughly strengthened, and were back to doing their job of properly conducting electricity between the places we actually wanted it to go. And the remnants of melted fuse covering that were cremated into our fuse box had been expertly cleaned out and sent to a more fitting final resting place.

Finally the bulb connections were tweaked and tightened and a new, extra long life headlamp popped into it’s basically unreachable place on Iggy’s patiently waiting nose. The job was done, and there was nothing left to do but pay the bill.

Jay was struggling to disentangle himself from killing dragons in Skyrim, so I pinched his bank card and mustered all my meagre courage for the two foot walk to the counter. We cheerfully resign ourselves to spending all our cash on keeping Iggy moving, but it’s still always good to get a cheap bill rather than an expensive one. But we trust these guys. They do good work at standard rates and we were confident we’d be getting our money’s worth. And Iggy is seriously worth every penny we spend on him.

Still… Money is tight, and it was a huge sense of relief when the guys handed me a bill for £129. Phew! That was well within normal, manageable prices. Our slowly filling travel wallets were not going to be totally depleted again after all. Thank you Stainless Creations!

The sun was starting to slide it’s way westwards again, and the new headlamp shone nicely as we rumbled our nice, warm van back out the road from Falkirk. We’d had a fun day chatting to other vanfolk who’d happened in about their vehicles while we were there. Marley had been fussed and stroked and played with. The guys had treated us like old friends they were glad to have visit. Our electrics would probably need the odd re-tighten now and then over the years to come. But nothing was terrible. Everything was manageable. And, for now, we needed nothing more than we had.

And what more could we ever ask for? 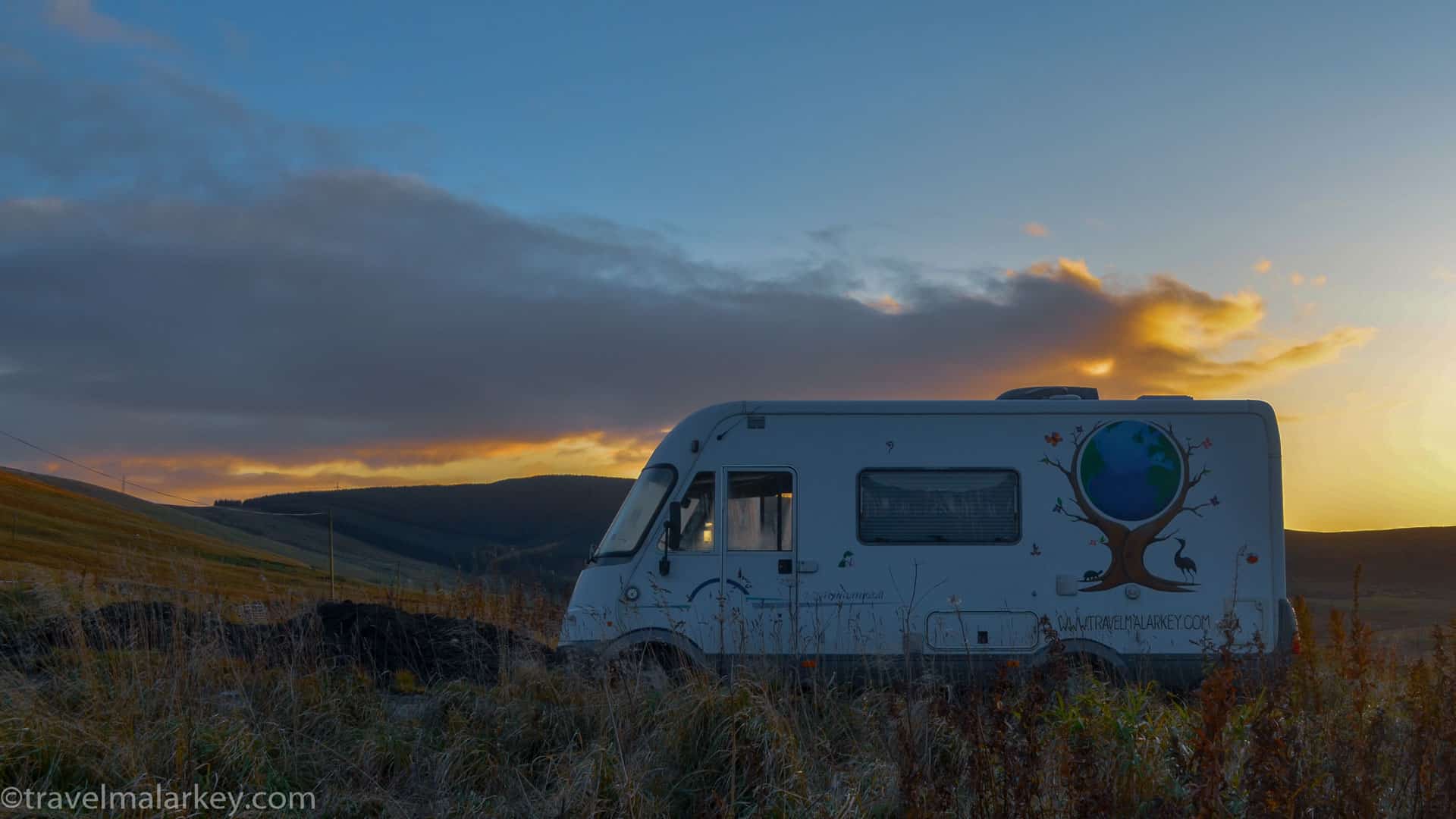