Rain on the Road to Curtea de Arges 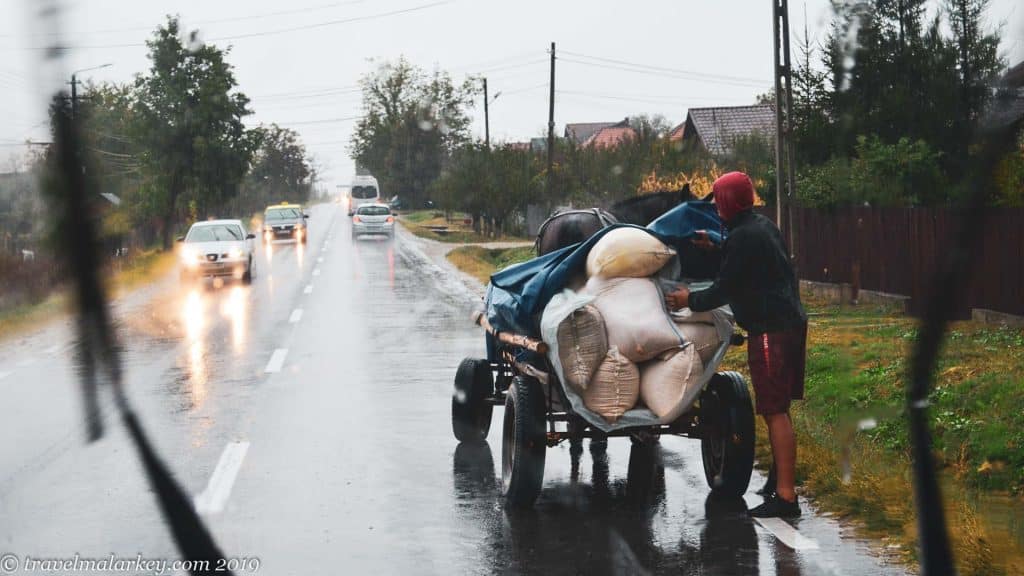 It will be a short post tonight as I write from Iggy in a rain soaked campsite just outside Curtea de Arges in Romania. ( 45.169082, 24.661836 ) Today has been one of those days that happens from time to time when travelling. A day when not a lot really happens. But it seems to take an awful lot of time and energy to not do it in.

Our plan for today had originally been to head for the interesting sounding city of Brasov. And then come here the following day, ready to drive the Transfagarasan highway the day after that. But late last night we decided to give Brasov a miss. I was stressing about getting caught up a bit with the blog, and wanted a “nothing much happening” kind of a day. Not a “Wow what an amazing place” kind of a day.

We needed to empty the toilet cassettes and there was a campsite just outside Curtea de Arges, perfectly placed at the start of the mountain highway. So with no further ado we slept in until well past ten o’clock. (Oops! ) Dog walking, breakfast and clean up later, it was half past twelve before we finally dragged ourselves into the cockpit and trundled Iggy out into the Bucharest traffic. 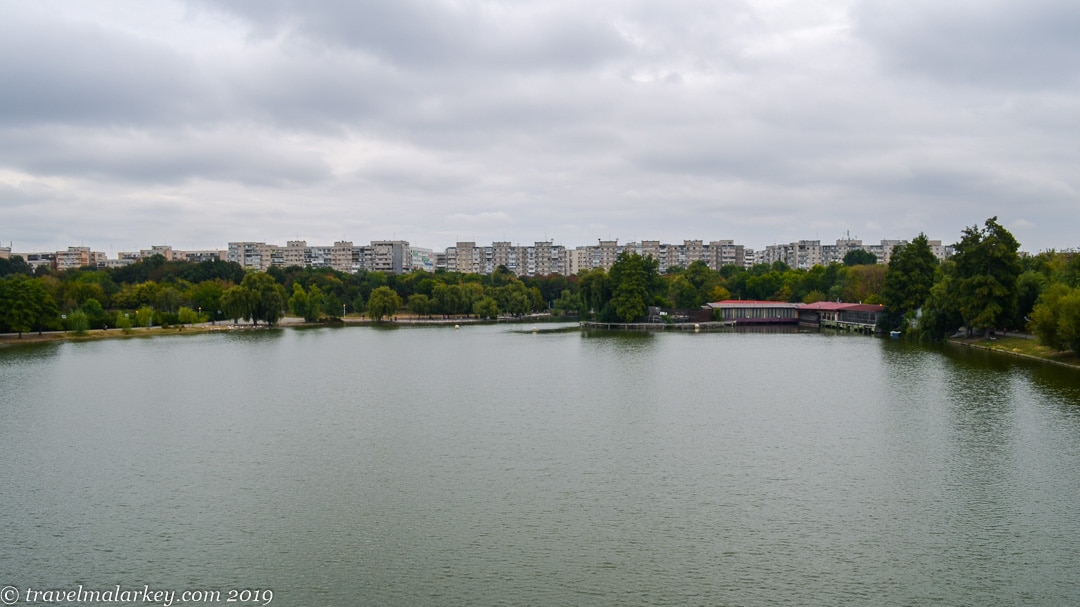 Lake in our Park stopover in Bucharest

This was, unsurprisingly by now, the point at which our easy relaxed day got a huge bit more hectic. Satnav had helpfully tried to route us right through the city centre, as the quickest way to Curtea de Arges. Who knows? It may even have been right. But having spent a couple of days wandering round the city there was no way we were taking that route.

Not that it was any less crazy where we were. But there was a lot less of Bucharest in between us and the nearest exit to the ring road, than there was on the route Satnav wanted us to take. It added a lot of distance, but it cut out an awful lot of junctions. And junctions in Bucharest were not the kind of places we liked to hang out in a three and a half tonne motorhome.

It took about thirty seconds of being out of the park and back on the roads to be really glad we’d made that decision. Driving through the city was every bit as stressful as we remembered, and time and again I was hugely thankful that Jay has spend a large part of his life driving in a capital city. Not that Edinburgh is at all comparable with Bucharest, but my boy does have a knack for knowing when to push forward and when to stop. And that is a handy knack to have when nothing gives way, and everything flies out of junctions in front of you as though you weren’t going to kill them if you couldn’t brake in time.

The estimated journey time on the satnav climbed steadily as we braked, swore, swerved, bullied and prayed our way out of the city and on to Bucharest’s pretty pathetic excuse for a ring road. One lane in each direction, broken bumpy tarmac, crazy overtaking, and the occasional grinding to a complete halt, and it felt like a lifetime until we finally escaped on to the comparitive peace and quiet of the country road to Curtea de Arges. 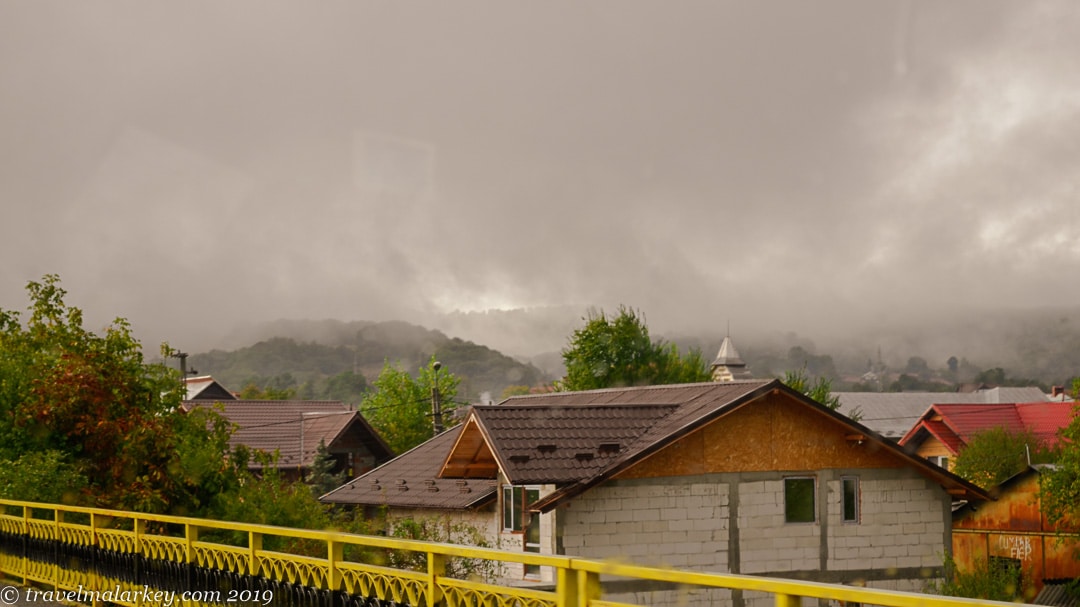 The grey overcast day had turned to drizzle as we fought our way around the city, and before long the drizzle turned to downpour. We’d thought to stop here and there along the way, but the rolling countryside did not look so appealing in the rain.

So on we drove, past a small traffic jam caused by a man having to reload fallen sacks onto his horsedrawn cart. The horse calmly and contentedly munching grass from the verge as it took advantage of the unexpected down time. 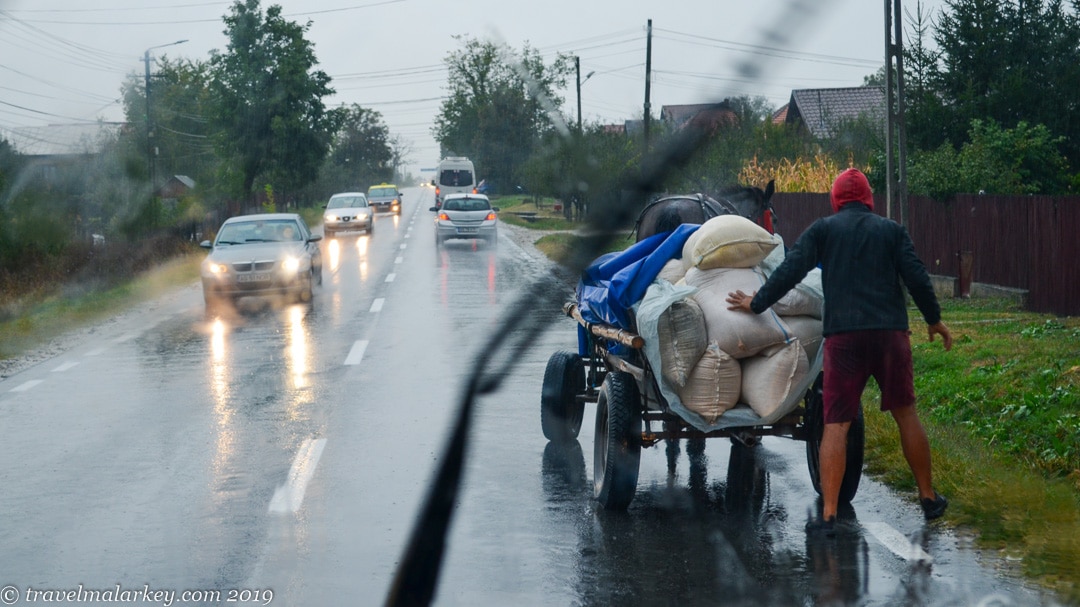 Cars and trucked carried on throwing themselves recklessly onto the wrong side of the road in suicidal overtaking bids. It seemed sometimes almost as though the less visibility they had the more likely they were to overtake. Headlights coming straight at us had become so commonplace since Croatia that I swear we barely notice these days. Only the odd times when Jay has to brake really hard to avoid being hit. Or when the overtaking vehicle cuts in so sharply it comes close to clipping our wing on it’s way.

As we came closer to our destination more and more sections of road began to submerge under light flooding, and I wondered what this would mean for our trip up the mountains in the morning. But the rain began to ease back to drizzle as we approached Curtea de Arges. Pulling back to thinning cloud as we stopped off at a supermarket to pick up some new mosquito spray and a flypaper for Iggy.

The campsite was on a trout farm so park4night had said, and I really couldn’t handle the thought of being bitten by another mosquito. We’d both picked up a few bites from our nocturnal guest in Bucharest, and yet another hot, sleepless night of humming in my ear was really not on my wishlist for today. 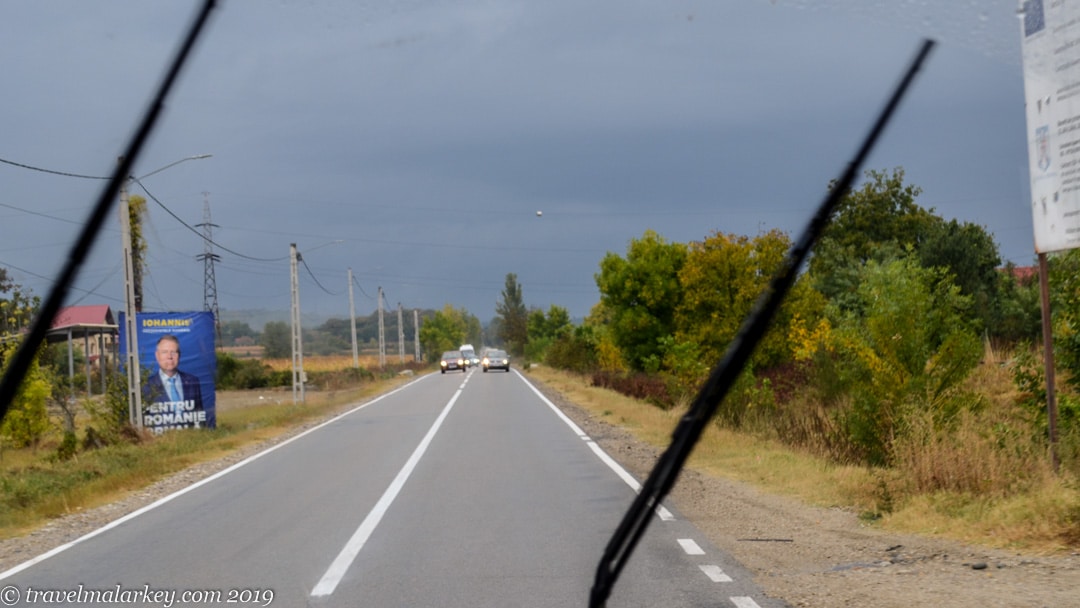 The familiar sight of headlights coming straight at us

And so, suitably armed, we eventually drove into the rain soaked campsite outside Curtea de Arges. Bucharest seemed like a lifetime ago, and our hearts fell a little at our empty, drizzly, mosquito filled surroundings. On a nice day it could be pretty here. Probably was pretty here. There were covered picnic benches for every pitch. Swing seats, a nice, cosy, communal kitchen/lounge area. The toilets were immaculate, everything was new, the small lake and cabins looked lovely. And as we wandered the misty, sunset tinged foothills were beautifully revealed by the parting clouds. 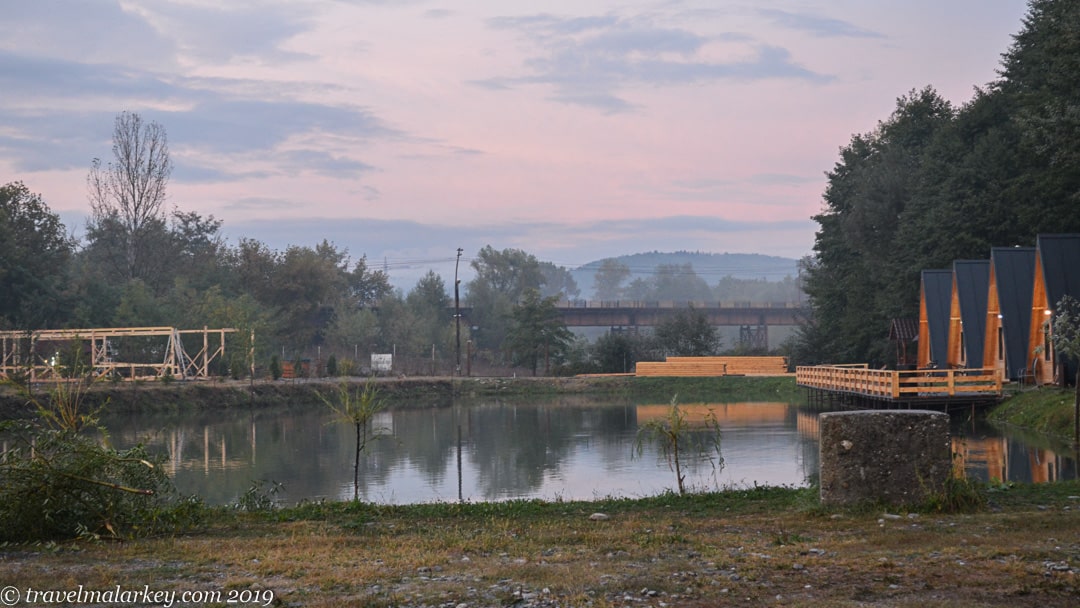 But the mosquitos were everywhere in the still, damp evening. And Marley had to stay on the lead as the campsite strays followed her everywhere we went. A friendly bunch with waggy tails who jumped back ten feet at every hint of a “Shoo!” But they were most likely full of fleas and ticks and possibly disease, so Marley couldn’t be let to roll and play with them.

I made the mistake of letting one little one coax a head rub out of me, and promptly fell in love with her. A wee sweetie of a short haired girl with beautiful, kind eyes. I want to take her with us, but know that we can’t. But she is such a love. It is hard to reject her. 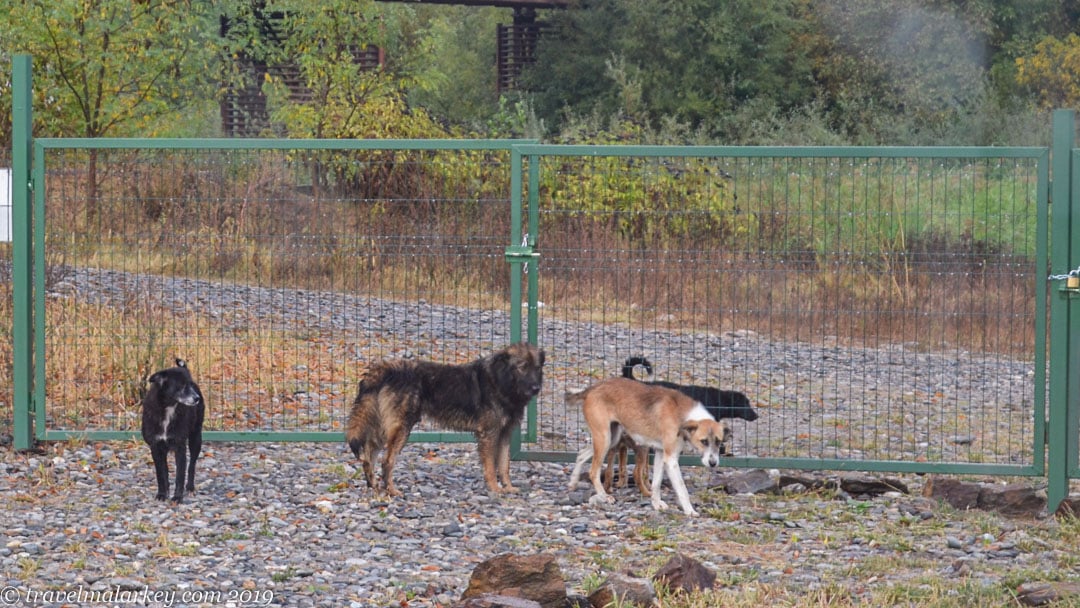 Some of the campsite dogs.

And so we retreated back to the van. Leaving the rabbits and aviary birds in the dirty pets corner to the thick, white, fog that rolled silently in from the mountains as the sun withdrew for the night. With the rain, the fog, the standing water on the roads – I thought maybe it was time I checked the forecast for the mountain pass for the next day. And it didn’t look too great. Heavy rain overnight and up until the afternoon. Lighter rain until late afternoon. 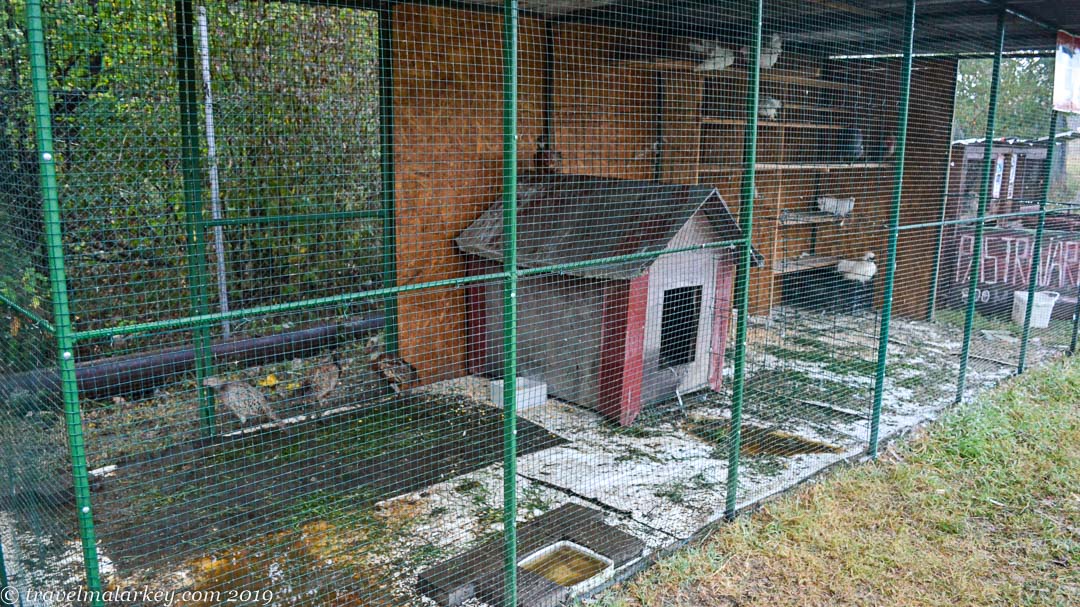 I opened the door and peered out into the fog once more. The Transfagarasan wasn’t going to be much fun with zero visibility and pouring rain. But we would wait and see what the morning would bring… 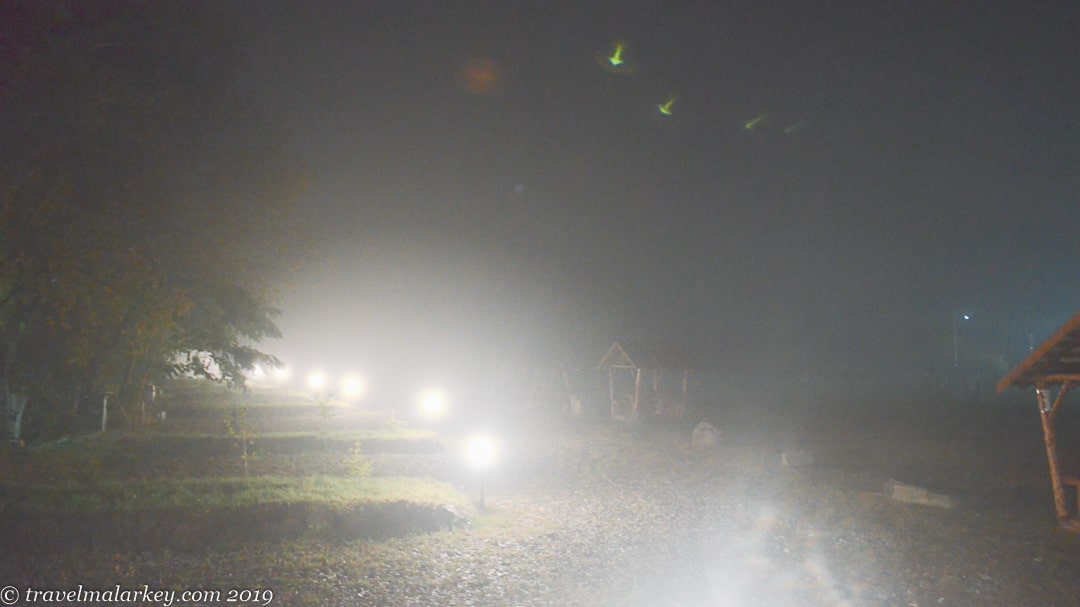