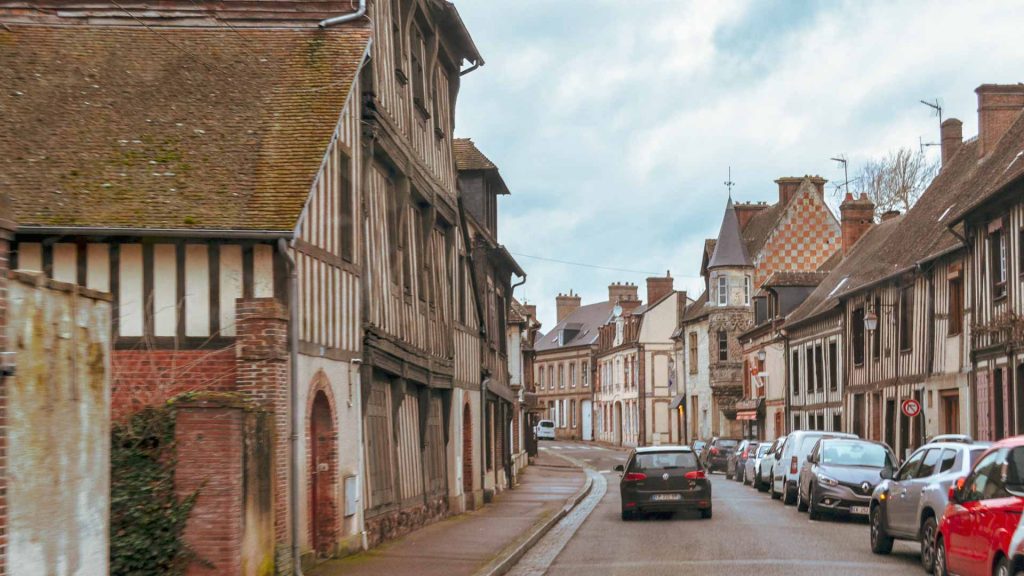 In my last post I left you somewhere on the road, halfway between Abbeville and Alençon on our second day in France.

The wind had calmed down a bit from the previous night; the rain was intermittent; and Iggy barely juddered sideways at all, as he ate up  kilometres, down the road towards Spain.

By choice we like to cover ground slowly. There are always new spots to find. Charming towns and villages passing by our windows. It is a shame to just rush on through to a destination, missing all the wonders of the journey as we pass.

In this case though we were, decidedly, looking forward to getting a bit of warmth in our winter long bones! Also we had promised to be near Malaga on the 19th of February, so dallying along at fifty kilometres a day wasn’t quite going to cut it.

We weren’t exactly rushing along at two to three hours driving a day, but it was still long enough to warrant a lunch break for Jay and Marley. Jay is a type one diabetic so we never drive for more than two hours without stopping to give him a break and a snack. Marley Dog is delighted by this arrangement as it always means a walk for her, and new sniffs for her greedy nose to sniff at! 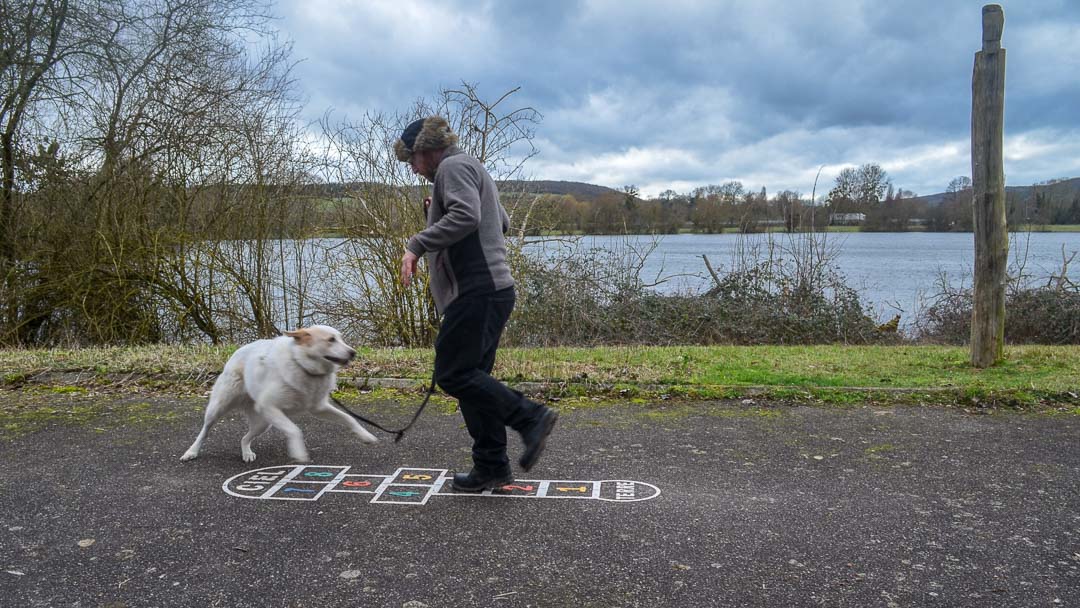 Today we struck lucky for our lunch stop, as we followed a random, motorhome Aire sign, just beside the pretty village of Acquigny.

The signs promised a lake…et voila! A lake there was indeed. And a very pretty, interesting lake at that!

After a leisurely lunch we went for a long, rambling stroll around the water. With Marley gulping the air like a man just rescued from drowning. Eating up the smells greedily as she said “Bonjour” to local dogs, eyed up the Geese longingly from the shadows, and beat Jay paws down at a game of hopscotch. 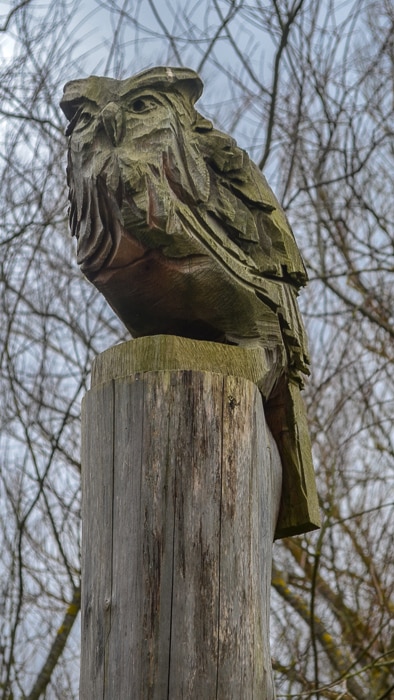 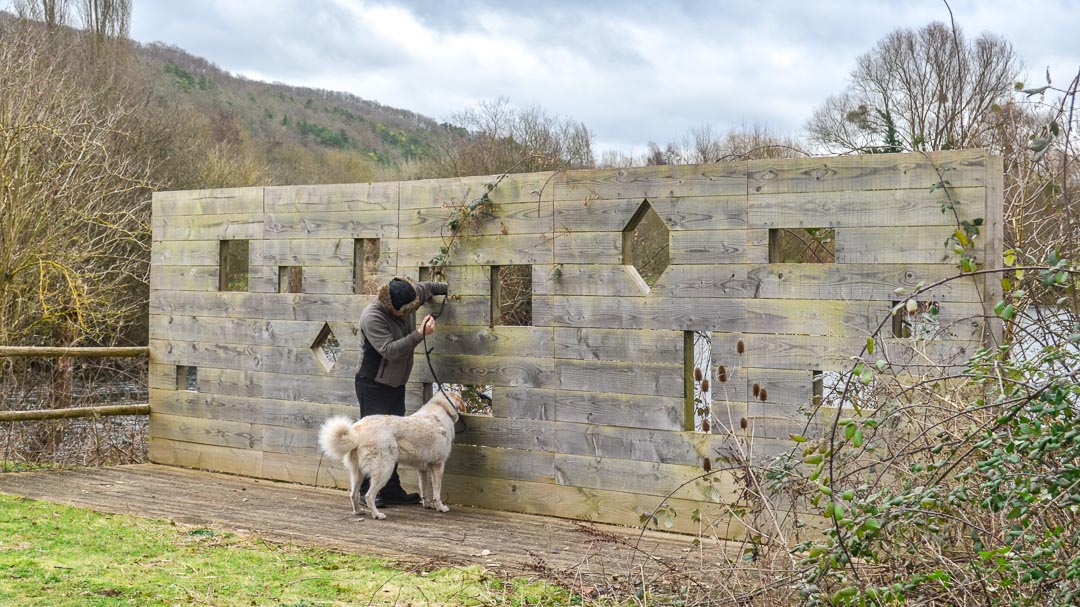 I spy with my little eye…

We even found a doggy obstacle course for her to play on, and she had great fun running along beside Jay as he showed her what to do!

All too quickly it seemed, it was time to get back on the road. So bidding a reluctant goodbye to the lake, we finished the last miles to Alençon in ever thickening showers of rain.

Hopeful that we could still enjoy something of the town despite the weather we pulled into the free parking spot at N48.427155, W0.093696 and set out to explore.

Iggy’s Parking Spot Next Day When Finally The Rain Stopped

Furry Ears and Markets in Alençon

Our overnight spot turned out to be in an excellent location, right by the River Sarthe walkway, and only a few minutes walk from the historic centre.

The rain teemed it down as we strolled past the fascinating old boat houses and around the beautiful and unusual building that is the Basilique Notre Dame d’Alencon. The gargoyles disgorged waterfalls of rainwater onto the shining streets below and after a few blocks round the pretty medieval centre we gave up and ran back for Iggy, shelter, and some good, cheap, French wine!

The rain teemed it down as we strolled past the fascinating old boat houses and around the beautiful and unusual building that is the Basilique Notre Dame d’Alencon. The gargoyles disgorged waterfalls of rainwater onto the shining streets below and after a few blocks round the pretty medieval centre we gave up and ran back for Iggy, shelter, and some good, cheap, French wine!

An hour or two after the pattering rain sent us  to sleep Marley Dog roused herself and began to scratch. She raised herself from her bed – underneath our overcab drop down bed – and settled on “her” sofa. Half an hour later the scratching resumed. She moved from the sofa back to her bed. Half an hour later… You get the picture! The dreaded ear infection had returned!

Between the scratching, the moving, and the worrying about how we were going to deal with the ear infection it was a long, restless night! Marley had an ear infection a few months ago which wasn’t handled too well by the vet she saw. Suffice to say she now growls at any vet who tries to examine her and will not let anyone mess with her ear when it’s sore. Marley is a big girl, and no definitely means no!

What to do? The ear needed treatment, but we weren’t keen on the idea of having her heavily sedated again. Not good for Marley, and not good for our wallet either.

Then I remembered that pharmacists in France sell medicines for pets. Would they be able to give us some antibiotics for her? We didn’t really need a vet to have a look. The symptoms were exactly the same as last time, so we were pretty certain it was just another fungal infection…

Fingers crossed we set off through the gorgeous morning sunshine into the pharmacy we’d spotted in the town centre the night before. To my delight the pharmacist did indeed have doggy antibiotics for this very thing. And for the paltry fee of 10 Euros! Result!

Across the river from our stopover spot.

The bad news was it was a topical application, not tablets. Hmmmm. I really didn’t know if Marley would let me put this in her ear. This was going to be tricky…

She was still letting me rub her ear though, so I decided I would try and trick her by popping the gel on the heel of my hand with a glove and trying to give her an ear rub when she wasn’t looking. If it didn’t work we’d only lost ten euros and would just need to go to a vet on Monday and ask for tablets.

Heading back to Iggy for the attempted treatment we spotted a market in full flow up by the old town ramparts. Marley instantly forgot all about her sore ear as the delicious, tempting smells of cheese, fish and meats wafted past her nose. Mmmmmmm!! Market!!

Grabbing a coffee and a crepe au chocolat for breakfast and topping up our fruit and veg supply with fresh, unwrapped champignons, juicy plum tomatoes, avocados and a sumptuous artichoke helped distract us from the smells of rotisserie chicken.

And while Marley wasn’t paying attention, I popped on a glove, dropped a pea sized piece of antibiotic gel on it, and gave her a good old inner ear rub while she wasn’t expecting it.

It worked! She stared suspiciously at the glove, but was clearly enjoying the ear rub! I could see she was going to be suspicious of me every time she saw the glove, but it looked like this might actually work. The antibiotic should really be getting squirted right down to the bottom of her ear. But we would keep our fingers crossed that this would be good enough and see how she went in the next few days.

Fruit bought, sunshine enjoyed and dog problem dealt with it was time to get back on the road.

Using our favourite method we packed up Iggy, turned off the gas, and headed south. I would find us a stopover on the way.

Want To Get All Our Latest Motorhome Travel Tips, Articles, Location Info & Exclusive Content?
We promise to send you no more than one email each week. We will never give your Email Address to anyone else. Easy unsubscribe at anytime.