Tomar – The Town of the Knights Templar 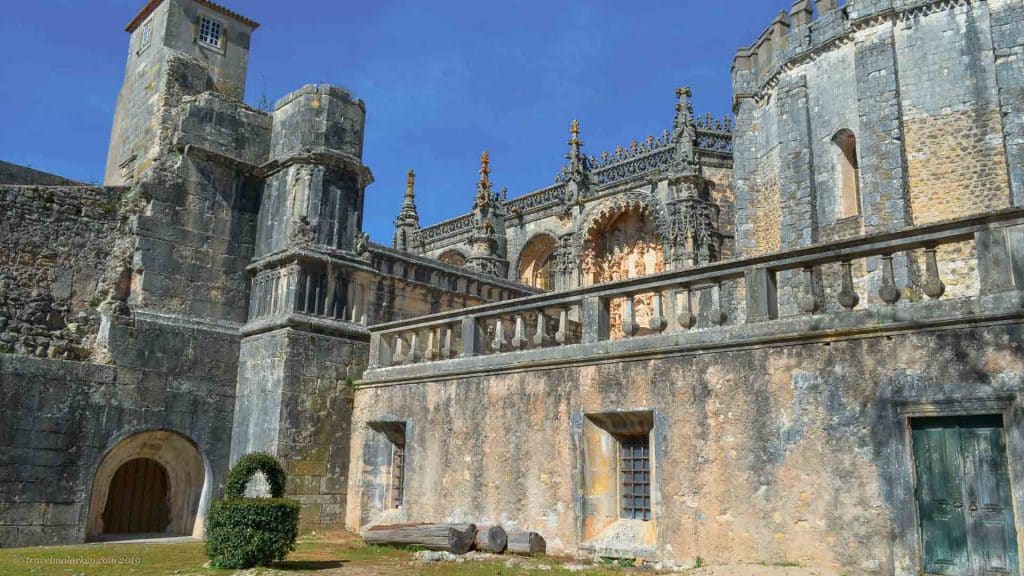 After our long day out in Coimbra we decided to stay another day and just loiter around the areas of town closest to the van. To eat breakfast in the park, lunch in the cafes, and spend a long chilled evening watching movies with our feet well and truly up.

In fact it was such a lovely, restful day, and the atmosphere so easy going and relaxed that we found ourselves deciding to really take a break and do it all over again the next day.

So it was then that it was Friday, 1st March before we finally got round to packing Iggy up again and trundling off down the road towards the town of Tomar.

As usual I knew as little as possible about Tomar before we went there, but from what we did know we were really looking forward to it. Firstly, the free Aire was located in the old, closed down, municipal campsite, so promised to be amazing. And secondly, my quick glance on Google said Tomar boasted a Templar Castle. Now that sounded right up my street! 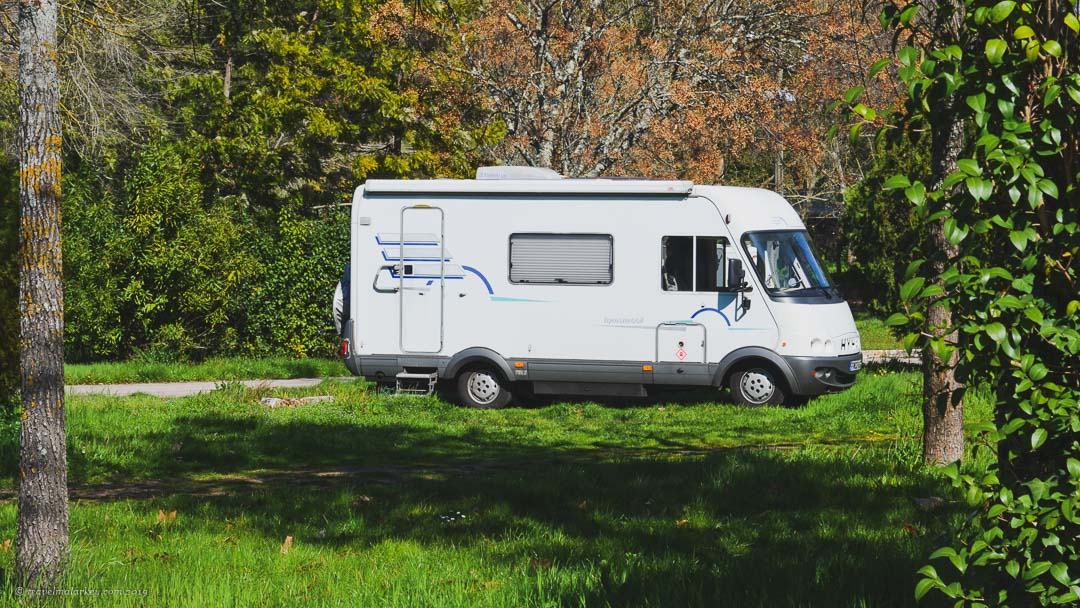 Yup. This is a free Motorhome Aire. No fees means more money spent in local shops, bars, restaurants and attractions.

Tomar, it seemed, did not wish to disappoint, and first impressions as we drove into the “Aire” were nothing short of amazement. Really? We could just stay here? For nothing? This was all just for us vanfolk? What a wonderful town this was.

We’d already decided that we were going to spend the full weekend in Tomar. It was Carnaval weekend so sites and Aires were likely to be busy, and having found such a great spot we weren’t budging till Monday.

With that in mind we decided to make today chore day. We took a wander in the opposite direction from the historic town, up to a largish supermarket and grabbed a couple of bags worth of things we’d run out of. Jay managed to fit 12 beers into his backpack as well. The strength he has for carrying knows no bounds when there’s beer involved. 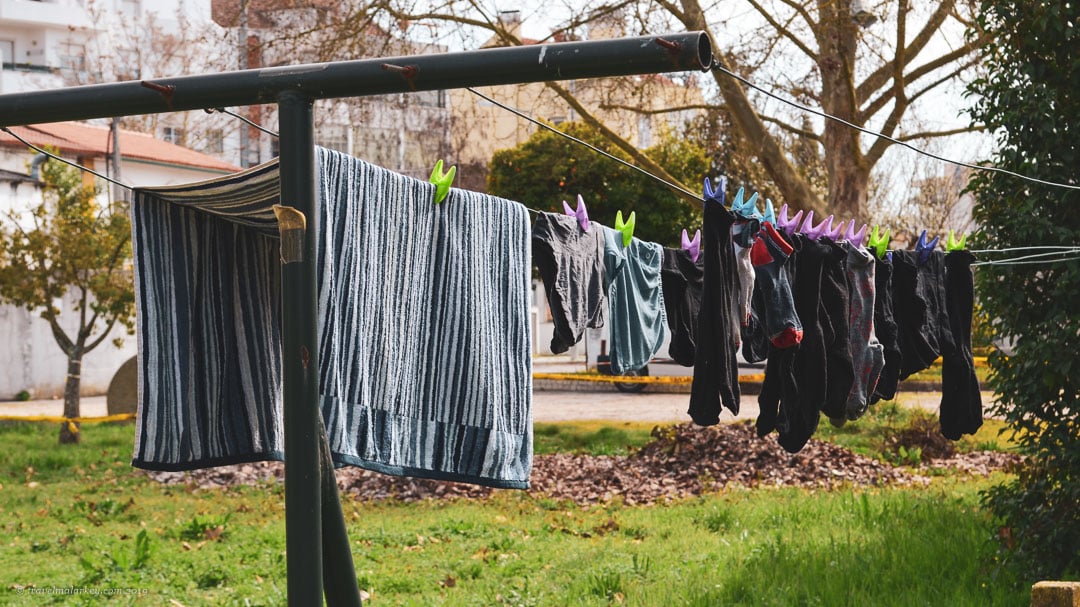 A glass of red and laundry drying in the Portuguese sun. It is indeed the simple things…

There was no hot water on the Aire but a lot of the sinks and toilets were still functional so we managed to get some hand washed laundry done. It’s a rare treat for nomads like us to have our laundry hanging out to dry in the sun. And we even managed to wash Marley too. An even rarer treat!

Chores done we had a nice relaxed evening sitting out in our chairs and taking Marley for a little walk along the river before bed. The next day we would explore Tomar properly. 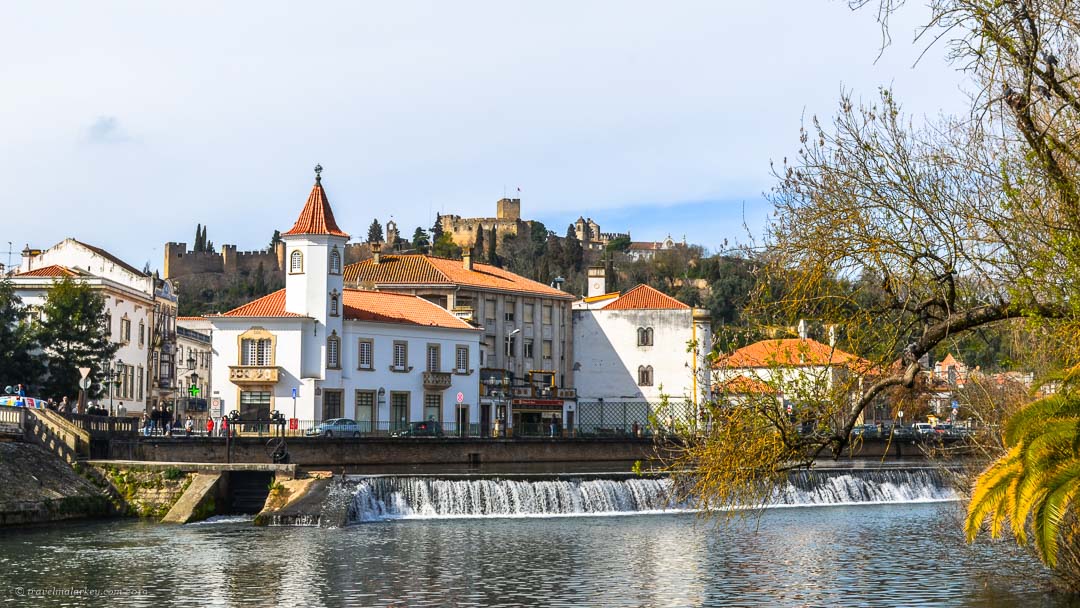 Next day we set off with high expectations after our wander on the riverbank the night before And the historic old town did not dissapoint.

I just loved Tomar. It’s a place that could easily stop a travellers feet, and pull them in to stay for a year or three.

Wandering the pretty old streets, the huge, dramatic presence of the castle ever looking down on us, I could feel a tiny taste of what it must have been like to be one of those long ago villagers.

What was it like to have these mighty Knights of God as an ever present force in your life? Did it fill them with awe? Terror? Joy? Maybe a mixture of all of these? And maybe, even then, some felt anger, dislike, despair, saw the church and it’s Knights as privileged madmen, a blight on ordinary lives? 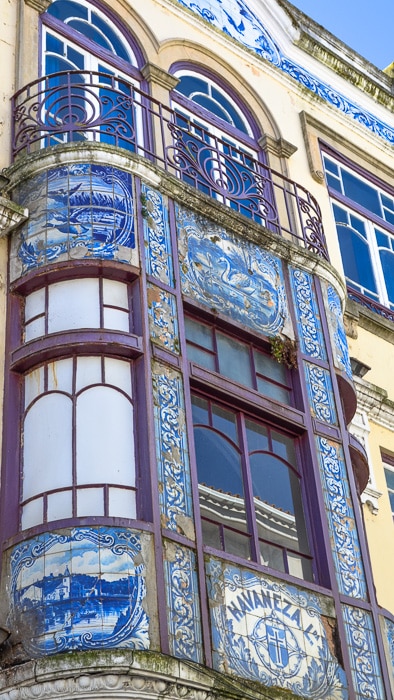 Whatever it had been then Tomar today is a town of light. Everything feels easy here. We stop for a bit in the gorgeous main plaza. There are plenty of tourists, but the prices are still normal, low Portuguese. €4.60 for a couple of coffees and cakes. In Portugal we eat out all the time. Why not at these prices?

It’s hard to tear ourselves away from a long, lazy day in the plaza, but the Castle is calling me. Dragging  a complaining Jay to his feet we head for the hill up to the waiting Convent of Christ, one time home to the famous Knights Templar. 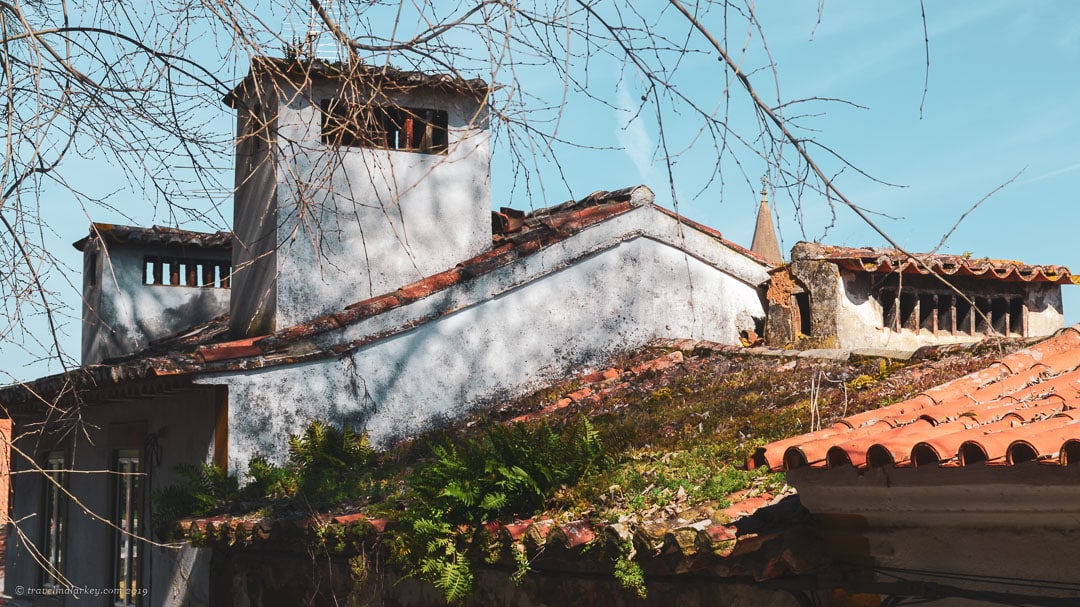 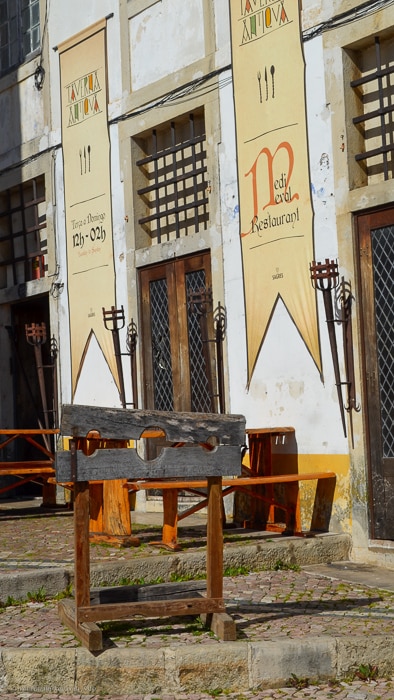 The walk up the hill was anything but a hardship. The touristy medieval bars and shops were nicely done, and very inviting. On the edge of the slope up, rows of quirky old village houses fascinated me with their bent roofs and unusual chimneys.

As the winding road took us nearer to the castle we stopped for a look around the Church of Santa Maria do Olival. A beautiful old building in it’s own right. Sitting in simplicity on a small plateau beneath the Templar fortress it gives stunning views of both the castle and the surrounding countryside.

There’s an air of pease about the place that makes it hard to leave, even when leaving promises such high rewards. 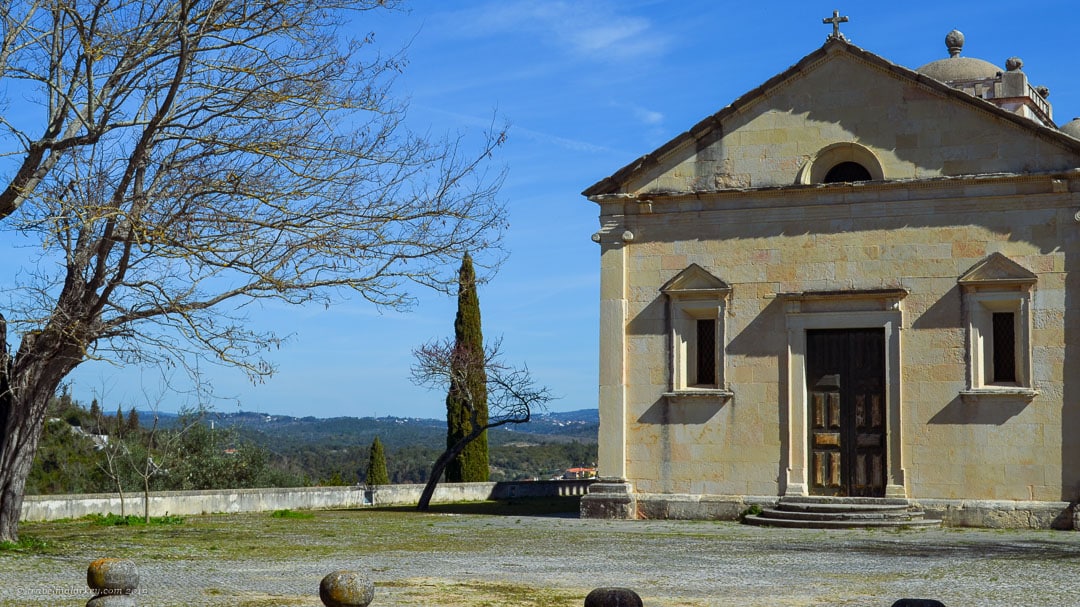 And so, finally, we reached the main attraction of the day. The Convent of Christ. A mixture of sight seeing Templar castle, and the working monastery it has been since the fourteenth century when the Templars were disbanded.

Sadly, as usual, dogs were not allowed inside, and so we could not visit inside the buildings themselves. But the gardens and wall walk were free, and there was a cafe outside the gates. So we planned a cunning plan.

Jay would, regrettably, poor Jay, have a beer in the cafe with Marley, while I shot round the gardens and took some photos. Then I’d come back and have a beer while he took a wander round himself. 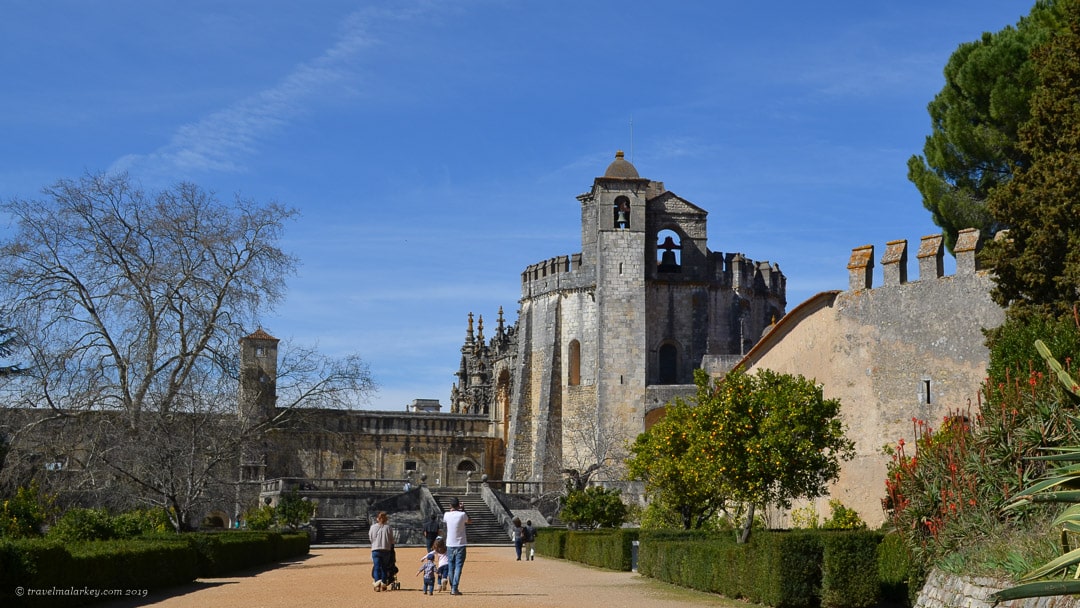 We tend to just give things a miss if we can’t take Marley, but I’m so glad we made an exception this time. I’d suggest doing the same if you have a dog, becasue this place is stunning, and really not somewhere to miss. I’m just sorry we couldn’t go inside too. But even to do the gardens justice takes about an hour so it would be a pretty long wait for the person outside to do the whole thing. 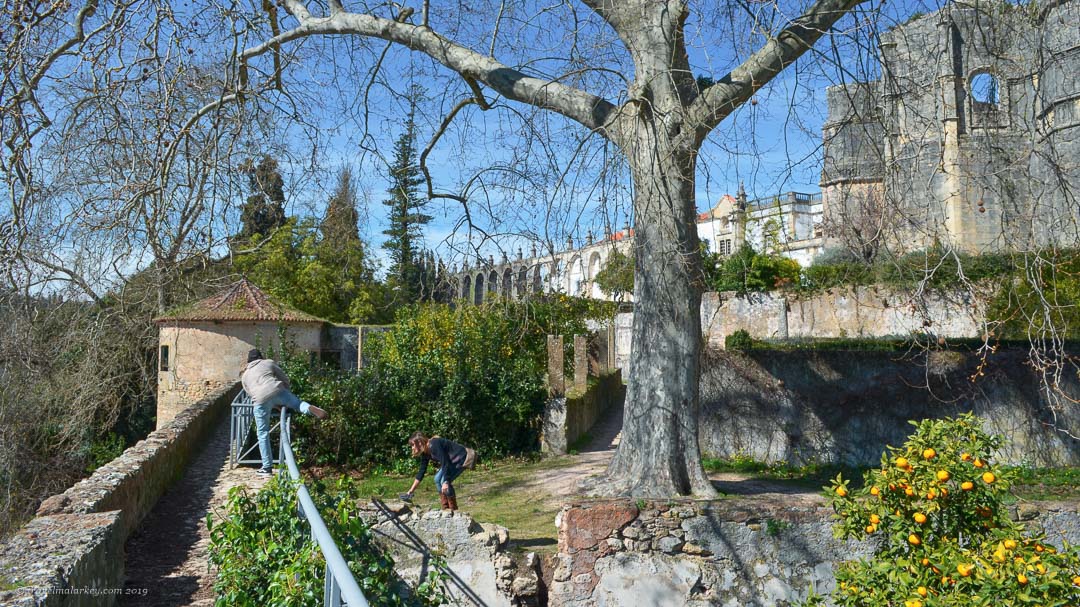 I’ve got so many photos from that walk! To choose just a few for this Blog took me longer to do than writing the Blog itself. Just to choose!

As with all the places that yank my heart into my mouth with their beauty I so desperatly want to share it with everyone. Everyone! Just grab the whole world and plonk them right there, right now, seeing what I see.

The architecture is simply gorgeous. The views of the town below an incredible insight into the “watched over” sensation for the villagers and knights alike. And the people risking life, limb and embarrasment to climb walls and fences to steal the monks’ oranges were kind of silly, kind of disrespectful, and kind of hilarious, all rolled in together. 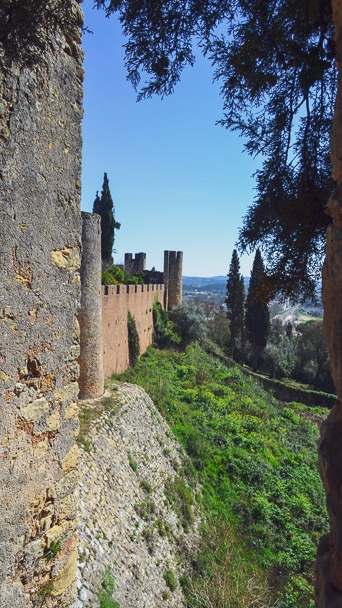 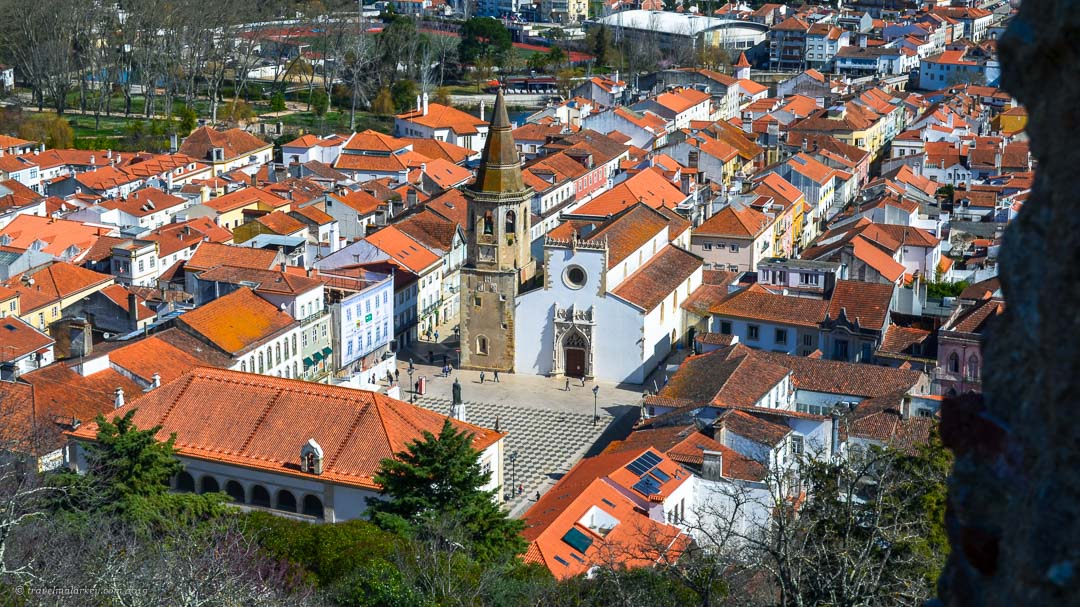 Once more we had walked our little legs off, but Marley had done a fair bit of sitting around and we pushed in a few more miles before home time by exploring the park at the base of the castle next to the old village.

It was far too interesting for us to give it justice after a full day of wandering. Grottos and mazes and flower beds and ancient wells. Marley loved it. But even she was happy when we limped our way back along the pretty riverside to the Aire and dinner and a glass sitting outside with the setting sun. 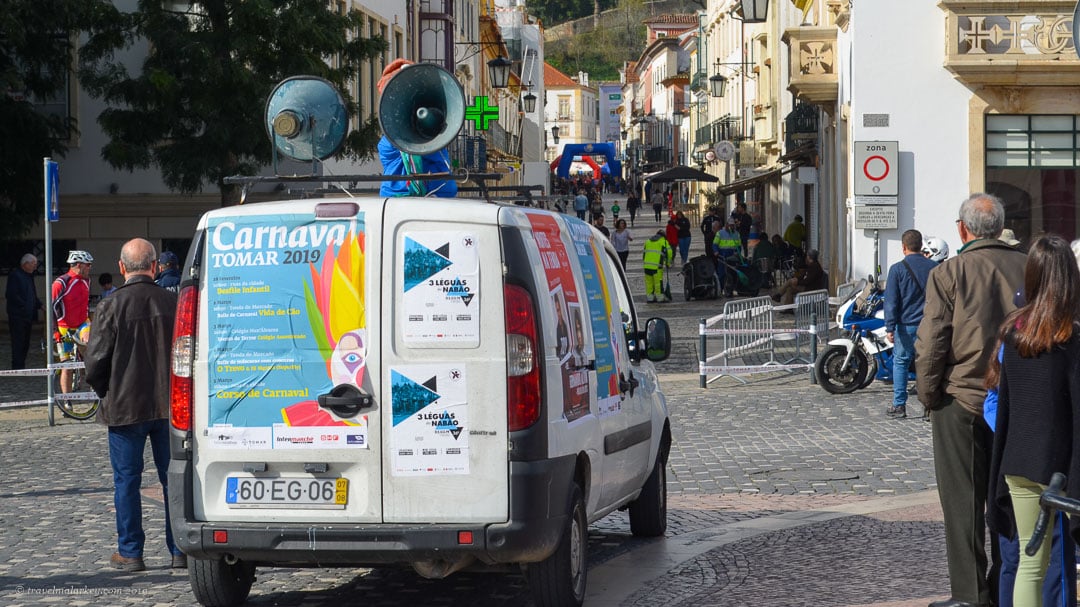 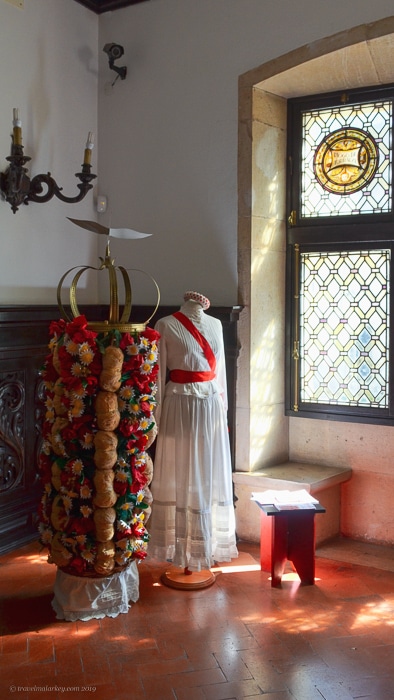 The next day we set off after a long lie to see what Carnaval goodness Tomar had to offer. We’d seen signs around listing different things on different days, and thought today must be a busy one.

We were hoping for a procession of the crazy headdresses we’d seen in the tourist information office, and on murals and posters around town. But it turned out that happened in July so we weren’t going to see it today.

The main event turned out to be some kind of race day, and we joined the throngs in the plaza as what looked like half the town took part in race after race. With huge cheers for all the returning runners.

We sat with the less energetic in the plaza drinking coffee and beer and eating cakes. One last walk along the river. A quiet evening out at a pizza place. And tomorrow, we would leave.

Farewell Tomar. I will miss you. 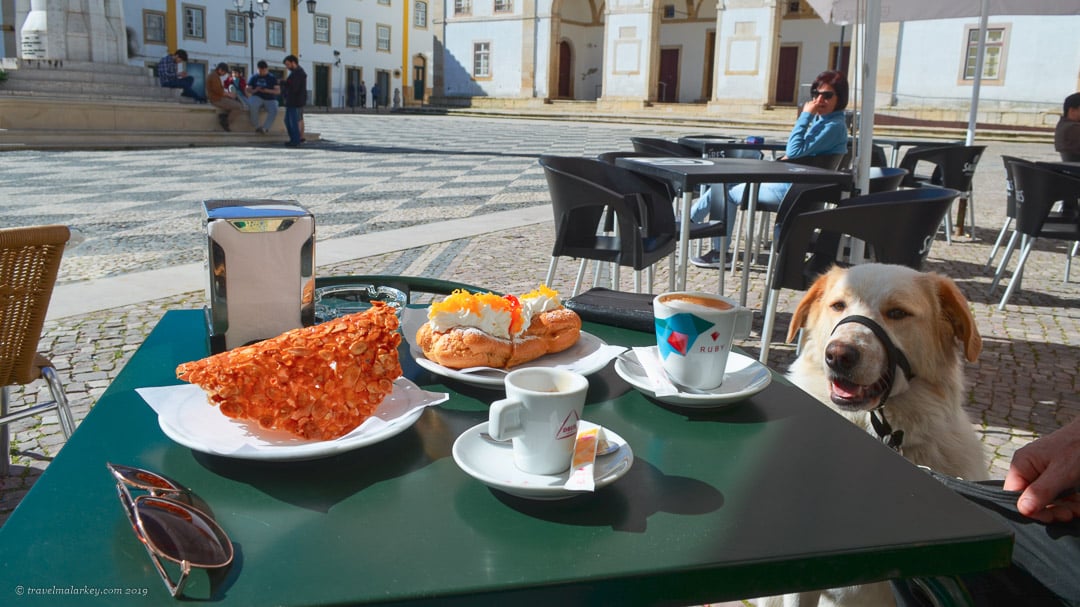